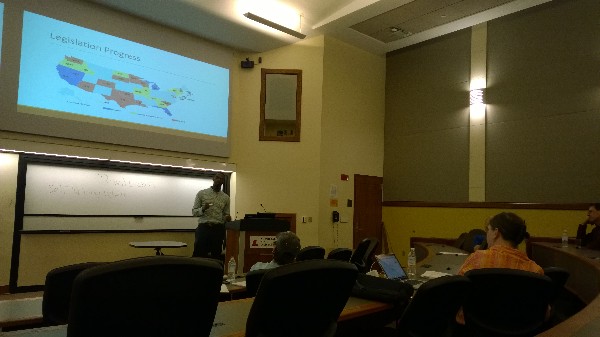 That’s what driverless car researcher Akin Shoyoyesaid during his presentation“What happens when driverless vehicles become the norm?” at the Google I/O Extended 2015: New Jersey conference, held at Montclair State University on May 28.

More than 250 tech enthusiasts learned about new Google offerings at the conference, which ran in conjunction with the Google I/O developers’ conference in San Francisco.  The Montclair event was organized for the second year in a row by Google Developer Group: GDG North Jersey.

“We’re starting to look at cars as more of a service, and that’s exactly what Uber and Lyft have provided us,” said Shoyoye. These companies are part of the increasingly prominent “sharing economy,” which has paved the way for the autonomous vehicle industry, he explained.

Shoyoye said that many companies see autonomous vehicles as a business opportunity because “a lot of us want to reduce those mundane tasks and say, ‘Look, I have better things to do than wait in traffic.'” And as driverless cars could meet people wherever they are, many consumers will want to opt out of buying their own vehicles.

New technology developments have given companies “an opportunity to cater to us,” said Shoyoye.

Still, many people have reservations about riding in driverless cars, he admitted. “Every time I talk to a person about driverless cars, they’re like, ‘I don’t want to give my trust to a car. Why do that?'”

Many people are concerned that driverless vehicles could be hacked, Shoyoye noted, but he assured the audience that “generally, if we can build this from the ground up, unlike the Internet,” it will be safe.

“If you can do it in the aviation industry, if we can do it when it comes to watch towers for airplanes, we can certainly do it for vehicle-to-vehicle communication. So I wouldn’t worry too much. What I would worry about is funding security research to make sure this is a solid system.”

Companies currently “understand that some people are reluctant … to give up that control. So right now they’re building systems [that still allow] the driver to grab the wheel and take control of the car,” he said.

Shoyoye outlined the current state of driverless cars by pointing to the four levels of vehicle automation developed by the National Highway Traffic Safety Administration. Level four is the most advanced, but “level three is something we’re very at right now,” he said. “Think of your driver assistance programs. I know a lot of cars right now, they can … parallel park themselves. Although it’s a little slow, it’s a fact that it can be done. That’s what level three is. And that’s where a lot of experiments are occurring.”

He added that “the issue with level four is the fact that there are way too many variables going on. Think about it—the weather, the roads, other drivers, people in the roads, the lighting, how the cameras are taking in information, how the sensors are taking in information, will the computers work all the time? Because essentially, for transporting people — especially over far distances — it has to work all the time.”

That’s why companies like Google are doing tests and “making all these cross-country road trips,” Shoyoye said.

Most states, including New Jersey, still don’t have any laws specifically allowing or prohibiting driverless cars within their borders, according to Shoyoye. “So, if you have one, you can essentially go forward with it. But sooner or later we still need a set of guidelines.”

Shoyoye is a team member at DriveAI, an organization advocating the passage of New Jersey Assembly Bill 1326. This bill would establish a license for the operation of autonomous vehicles. Anyone interested in helping may want to join DriveAI’s Self Driving Vehicle Meetup.

DriveAI is also building the technology to turn the three-wheeled Mellowcab into an autonomous vehicle. Shoyoye explained that the Mellowcab is a “vehicle that doesn’t go faster than twenty five miles an hour. And what we’re doing is outsourcing parts and developing the code for the vehicle and to essentially make it driverless.”

Initially, autonomous cars “won’t be perfect,” Shoyoye said, “but we can’t strive for perfection for the first go-around.”

In sum, although people may no longer need to own cars, driving enthusiasts will be able to continue doing what they love.