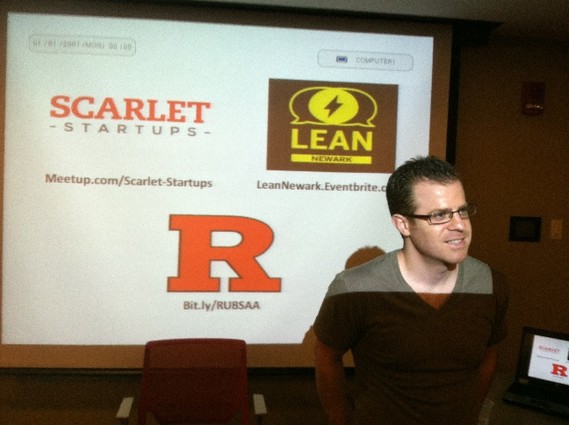 [Annett, a patent agent and entrepreneur, is president of Livingston-based Annett Enterprises.]

On June 27, 2013, Rutgers Business School Alumni Association (Newark), Scarlet Startups and Lean Startup Machine Newark jointly hosted a meeting of 35 registered attendees at which entrepreneurs were treated to an in-depth discussion on the realities of fundraising.

Members of the N.J. tech community got to listen to a speaker who figuratively wrote the book on VC financing and literally wrote a book on how to obtain it.

That speaker, Mark Peter Davis, not only lives and breathes startups but refers to himself as a “startup addict.” He is the founder of Interplay Ventures, a cofounder of Kohort, Venwise, DevSpark and Foundershield, a venture partner at High Peaks Venture Partners; and author of The Fundraising Rules.

Davis counted down the 10 most important issues that anyone seeking funding should know, continuing into negative numbers to share additional insights. Those issues and insights are as follows:

Whether a company gets financed initially through equity-based financing or a convertible debt note — which defers decisions regarding equity until the subsequent round of financing — should be fairly easy to decide.

Said Davis, “If you have a good deal in place, lock it in. If you have [a bad] deal, wait for better days” [and take the convertible note].

6. An investment overview slide is essential.

An investment overview slide should appear first in the PowerPoint presentation. While some patient VCs will allow entrepreneurs to tell their own story, most won’t. They want to know up front whether this deal is worth sitting through. If they don’t receive that information up front, they will be distracted and likely to interrupt the presentation.

At this point, most venture deals are almost boilerplate. However, VCs’ culture is what determines which aspects are most important to them and what they emphasize. That said, everything is negotiable.

Nevertheless, there is a key difference between dating and VC funding relationships: in dating, partners may not share what they are up to with someone else, but VCs want to know what entrepreneurs are up to with other VCs, and progress should always be signaled to other VCs. For instance, if a startup is having a partners’ meeting with one VC or has received term sheets, the other VCs should be informed. Nothing will make them react faster than knowing that a company is a hottie and someone else is interested.

If a startup is offered term sheets by a VC and can raise money slowly, it may be able to tell the VC it is not currently reciprocating commitments. As entrepreneurs consider other VCs, they can let them know that they already have term sheets from another VC. This may even cause the initial VC to sweeten the deal.

No one in the VC community really knows what makes a good investment, and even the best VCs have only a 1:3 hit rate. As a result, they tend to gravitate toward what others have latched onto.

“Everybody wants to be the first to be second,” said Davis, and once you get that first term sheet, VCs may end up fighting for the chance to be the second ones to commit.

While all the strategies above represent the traditional approach, “expressing your love” is the preferred strategy. That is, if a startup finds the right VC and they truly are the people they want to work with, it might be worth the risk of expressing that to the VC. If the feeling is mutual, just like in dating the startup and VC can quickly move on to a relationship that is both healthy and mutually beneficial.

A video of a similar presentation by the author is available here.