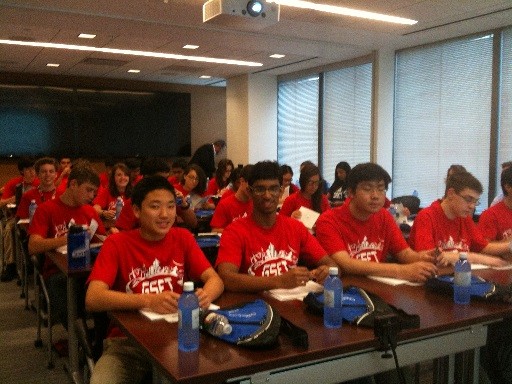 The student’s at the Governor’s School event at Juniper OpenLab wowed everyone with their sophisticated questions. | Esther Surden

(One of the frequent comments by our readers is that it often takes too long for NJTechWeekly.com to fully cover a conference or meeting we attend. So here is a short recap of where we went and what we did in the last two weeks, until a more in-depth story can be produced. We’ll try this out for a while to see if you like it.)

Monday and Tuesday, July 8-9: On July 8th and 9th, NJTechWeekly participated in some interviews. We talked to the angel investment team from Soundboard Angel Fund, a fairly new (2012) Morristown angel investment group that just led a funding round for TabTor, a Kendall Park-based maker of e-learning solutions. Our key takeaway here: While TabTor was the angel group’s first New Jersey investment (out of six), Soundboard is looking for great NJ companies to support.

We also talked to Hoboken and New York-based Enhatch, which we covered about a year ago when the company pitched at the NJ Tech Meetup. Enhatch has pivoted and is making money. It now offers companies a powerful app creation platform to make complex sales easy. Previously the company was centered on its 3D modeling capability, which is now just an added feature. Our key takeaway here is that pivoting can take a company on the road to success.

Wednesday, July 10: NJTechWeekly spent the morning at Juniper OpenLab in Bridgewater. Juniper was hosting high school students from the Governor’s School of Engineering and Technology which takes place this summer at Rutgers. The students were treated to a great program that gave them a look at Juniper as a place to work and a review of the technology Juniper has developed.

A key takeaway here: if you are hosting Governor’s School students from New Jersey, be prepared for sophisticated questions that perhaps only your senior engineers can answer! Juniper was quick to get those answers for the very engaged students who peppered the presenters with questions.

Wednesday evening found NJTechWeekly in Madison for another Madison Tech Meetup. This one featured Heath Ahrens from iSpeech. Ahrens was an engaging speaker who talked about some new features coming out that will uniquely define iSpeech as a company. Key takeaway here: Although iSpeech had extraordinary success with DriveSafe.ly, an app that reads text messages to drivers in the car, a company has to be more than an app and app success can go away in a flash. A company needs a sustainable business model to keep on going, and the company thinks it has now found that model.

Thursday, July 11: Thursday morning we went to the NJTC Health Information Technology Summit in Princeton, where we listened to two panel discussions, a fascinating one on technologies transforming digital health and another on financing strategies for digital health companies. Later that day Mary E. O’Dowd, commissioner of the NJ Department of Health,spoke to attendees and announced that $1.57 million had been awarded to a coalition of NJ health organizations to create and operate a statewide health information network. There were many key takeaways from this event: one that was very interesting was the struggle over who owns patient data, the patient or the many other entities that are using and sharing it.

Tuesday, July 16: On Tuesday, NJTechWeekly was in Whippany at the monthly Venture Association of New Jersey event. Speaking this time was David N. Feldman, Partner, Richardson & Patel who had a new book called the Entrepreneur’s Growth Startup Handbook. Feldman delivered a low key address that captured some of his ideas on this topic.

Thursday, July 18: Thursday, we attended two events. In the morning we were at the NJTC annual meeting which had an unusual format this year. During lunch, participants found their seats at tables that were discussing various topics of interest to the tech community, from what NJ tech companies should do about impending health care regulations to a discussion of what coworking is.

Later, the organization also updated its employment survey from last year. One interesting takeaway: when companies were asked what difference immigration reform of H1-B visas would have on their employment opportunities, most surveyed said the changes wouldn’t have much impact.

The, Thursday evening, we attended a Brick City Tech Meetup in Newark where Phone.com’s Ari Rabban addressed a small group of attendees. Since the group was small, the networking was intense. Rabban talked about his circuitous route to funding and the importance a domain name can sometimes have in the success or failure of a business. He also spoke about some of the new initiatives the company is making to differentiate it and spark continued growth.