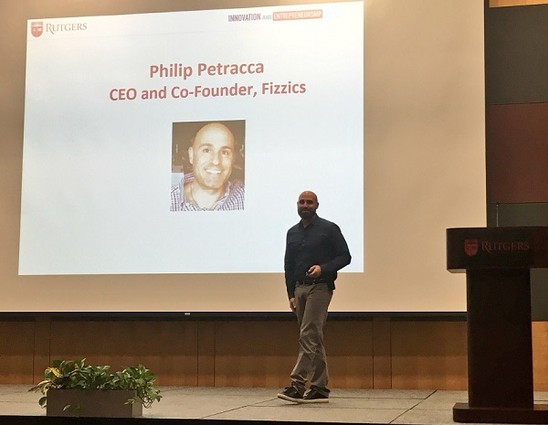 Philip Petracca is a New Jersey-based entrepreneur. Last fall, he came to the first Rutgers Innovation and Entrepreneurship Expo and gave budding entrepreneurs in the room insights into what it’s like to be an entrepreneur, especially an entrepreneur who sells a unique technology-based hardware product to consumers.

Petracca cofounded Fizzics (Wall Township), the wildly popular personal beer system, with David McDonald. After he shared his startup idea story, which involved trying to figure out why draft beer tastes so much better than canned or bottled beer, and taking apart a humidifier to develop a process that could create a foam head on beer that enhanced its natural flavor, Petracca shared some advice.

“I’ve been commercializing technology for 20 years. I’ve been part of some really great, well-funded startups. Your friends and family are the worst people to give you advice to pursue a business. I’ll tell you why. They love you. They’re going to encourage you. And your idea may be a really, really bad idea. Because the determination of whether you’re going to be successful always goes back to the market. Does the market think your product is viable? Is someone willing to give you money? What do they think about it?”

So the founders set out to validate their market.

At first they went to beer festivals with a crude prototype. “We had lines of people that wanted to test it. They were very skeptical, but they were very intrigued. … We did literally hundreds of demos, and people were just blown away. We were doing side-by-side comparisons. We had brewers coming to us with their beer that they had just poured out of their own tap, and saying, ‘How are you going to make my beer taste better?’ So, we put it into our system and did a side-by-side, and they’re like, ‘Wow.’ You really get the complexity, really start to smell these ingredients. … The texture was super smooth, super creamy.”

Despite the great response, the founders were still skeptical that they could make this into a business. The reason: “We were serving a bunch of drunken people beer at a beer fest.” They figured that they shouldn’t quit their day jobs yet.  At the time, Petracca was a chief product officer for a global biometrics security company, developing cutting-edge technology for identity authentication. “I was making really good money. Dave was my head of engineering. I said, ‘There’s got to be a way for us to go out and see if people are really willing to reach in their pockets and pay for this product.’”

They decided to crowdfund the business, to see if people really would pay for the product. Crowdfunding is “the democratization of the way innovation comes to market,” Petracca said . The founders did some research, and found that first they needed a great video. “In the video, you really have to express your passion. Why did you create this product? What does it do? How does it do it? What’s the benefit to the consumer?”

In addition to a great video, there are very complex algorithms that run on crowdfunding platforms, he said. A founder has between 24 and 48 hours to hit some key metrics in this algorithm. “If you do that, something magical happens. It’s called ‘trending.’ So now these platforms start promoting the campaign and the product starts getting visibility in front of literally hundreds of thousands … millions of people.”

In order to hit that metric, Petracca made a push for press coverage to raise public awareness of the campaign. He recalled, “I was working in Manhattan. I had this 3-D printed prototype, and they sold beer on every single corner.” However, in Manhattan there are lots of tech companies, media and publication companies: influencers.

“I figured, if I could get in front of these editors, publishers and influencers, and I could show them my product, there’s a good chance they may write about it.” So he put the 3-Dprinted prototype into his backpack and got a cooler for the beer. “And I looked up who all the editors were at all the publications: Gizmodo, TechCrunch, The Verge, CNET. And after work, on my lunch break, I would just show up at their office, in the lobby, and I would say, ‘Hey! I’m Phil Petracca with Fizzics, and I’m here to see John Biz.’”

He said no one turned down a meeting when they learned he had beer.

The bottom line is that all of these efforts got Fizzics to the point where it could launch on Indiegogo. That first crowdfunding campaign brought in $261,808 from 2,078 backers.

The next challenge for the emerging company was branding, Petracca said.

During his quest to introduce Fizzics to influencers, Petracca had come across Frog Design (New York), a prominent design firm that had previously worked with Apple. The founders had no money to pay for their design services, but Frog accepted them into a design platform program it was running.

Noted Petracca, “The best way for you to get people engaged in what you’re doing is to make yourself vulnerable and open yourself up to constructive criticism. And ask people for help. As soon as you ask people for help and they give you some advice, they have an ownership in your success.”

Frog Ventures made an investment into Fizzics and the group executed a design collaborative for 14 weeks that integrated the two teams to refocus the brand messaging and design. Waytap was the first product to be released through the partnership. “We recreated the whole entire design language, the whole logo, the grants messaging. We architected a more mature brand than what Dave and I put together.”

In the first quarter of 2016, Petracca began thinking about Shark Tank. “The one thing that we always heard from critics, especially at beer festivals, was, ‘Hey, you guys should go on Shark Tank.’ And I’m a big fan of Shark Tank. As a platform, there is nothing like Shark Tank because you’re able to get in front of influencers, celebrities, investors and millions and millions of people where you can communicate who you are, what your value prop is.”

He said Shark Tank is a “gift that keeps on giving” because reruns of the program appear year after year. It gets syndicated out globally. “So we knew that the platform of Shark Tank was the most powerful thing that could impact a small brand. Because it’s like getting a free ten-minute commercial, two, three times a year. We had no marketing dollars to spend, and educational awareness of this new technology was critical.”

Some 200,000 businesses applied to Shark Tank that year. And out of that 200,000, they narrowed it down to 225. And these 225 went out to Sony Studios in Culver City, California, to present in front of the sharks. “The one thing that producers will always tell you is that there’s no guarantee that you’re going to air… because your episode may not be good enough, or you may get slated to air and there may be some breaking news and it won’t air. And it’s a lot of work.”

At the same time, Fizzics launched its second crowdfunding campaign and finished up its design sessions with Frog. “If you go on crowdfunding and you have a successful campaign, and you deliver and meet expectations, the probability that your second campaign will be successful is over 90 percent. So we launched our second campaign with our new system, called ‘Waytap,’ and we broke records. We ended up doing $1.3 million. And just to put that in perspective, that’s .006 percent of total funds raised of all campaigns that ever ran on crowdfunding.”

To prepare for Shark Tank, the founders collaborated with the producers. “They really work with you on your pitch. It’s like an infomercial. They want to make sure that one, you’re entertaining, and two, that you are presenting yourself and your company in the best possible way. Because the value for the folks going on it, whether you get a deal or you don’t get a deal, is that you’re able to present to millions of people that are watching the show. So they want to make sure that it’s entertaining and that you’re doing a good job. And we rehearsed this pitch over and over again.”

The day they filmed, the sharks were having a bad day, said Petracca. They weren’t making any deals. The producers moved the Fizzics taping up because they thought the sharks needed a beer.

“We go out there and we do our infomercial pitch,” he said. “We’re sweating. Dave goes out to do a demo. And here’s the big test for us, right? And this is going to be a test that any entrepreneur will go through. You have to make yourself vulnerable, completely vulnerable, to criticism. Now here we are, on national TV, with all six sharks. And they can say they don’t like you. They can say they don’t see a difference. Right? Essentially, we could kill our whole company right there and then. … But we do the demo and their reaction is like every reaction of everyone who tried our product. They’re saying, ‘Oh my God, this is amazing.’ Every single one of them loved it.”

Fewer than 20 percent of the deals they do on the show actually close, Petracca noted, and the ones that do close are often different from the ones made by handshake on the show.

“We were super excited that we actually closed the deal. It’s been really good for us, raising awareness of what the product is. Lori Greiner is a rock star. I was on QVC with Lori three times, three sellouts, and I don’t think I said three words. She has this big captive audience, she’s in her domain. People trust her, so when she says, ‘This is great, you should buy it, a great gift,’ they listen. … Lori was also influential in getting us the launch at Bed, Bath and Beyond, both in the U.S. and Canada. Since then, we’ve scaled U.S., Canada, New Zealand, Australia, South Africa, Brazil, Mexico and South Korea. … We’ve got another ten countries coming on board. So it’s been an absolutely amazing experience for us.”

Petracca has since moved on from Fizzics. NJTechWeekly.com checked in with him recently, and he said, “Although I’m still the majority shareholder at Fizzics, I have decided to no longer be involved in the day-to-day operations, in order to pursue my dream of developing my own farm-to-glass brewery, www.sourcebrewing.com, to produce the best small-batch beers in the world. Delivering the best possible beer drinking experience is our hallmark. For me, it was always about the beer.”