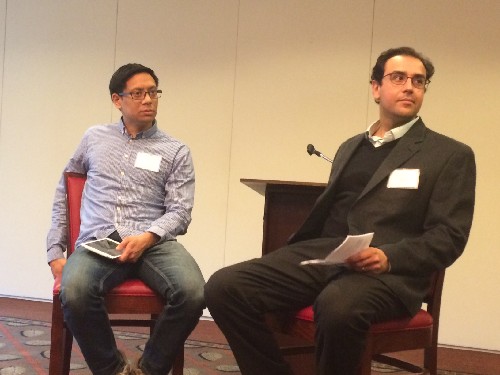 The last New Jersey Entrepreneurial Network meeting, in Princeton on April 8, featured Bert Navarrete, seed-stage venture capitalist and cofounder of the accelerator Tigerlabs, and Jon Cooper, founder of LifeVest Health, one of Tigerlabs’ portfolio companies, which has moved to Philadelphia.

The meeting gave some real insight into what business is like for a VC who’s been trying to build up the tech ecosystem in the Princeton area. And it revealed why one particular startup couldn’t stay in New Jersey.

Navarrete is well-known as the GM and managing partner of Tigerlabs, the coworking space, entrepreneurship center and seed-stage venture capital fund located on Nassau Street, in Princeton. A Jersey boy, Navarrete “decided to raise my family here in Princeton,” he said, mainly due to the proximity to his wife’s family in Philadelphia.

In 2012, Navarrete met with some entrepreneurs and VCs in Princeton who encouraged him to build out Tigerlabs for the town. He had also been talking to people about doing something progressive and innovative in the area.

Other investors told him that he should focus on healthcare IT. “Given our proximity to the large pharma companies in the world, we thought we could really marry a lot of my skills in understanding software” with the industry that surrounded Princeton.

Navarrete also said that there weren’t a lot of people in the Princeton area who had “cut their teeth in Silicon Valley.” Thus, the Tigerlabs Digital Health accelerator and Tigerlabs Ventures seed investment fund were born.

LifeVest’s Jon Cooper moved to the Tigerlabs Digital Health accelerator from Colorado.  Navarrete noted that, Cooper made a leap of faith for the period of time he was working with Tigerlabs.

Speaking about his entrepreneurial journey, Cooper said, “I think in terms of quality of life, Denver might be the best place to live in this country. … In terms of startups, Boulder has a great startup ecosystem focused on doing business with the consumer. Denver also has a great airport, but if you are a B2B company, you are getting on an airplane 90 percent of the time to go to talk to customers.”

Cooper quickly came to the realization that LifeVest had to move either east or west. “The decision was, do we want to move closer to capital or closer to customers? On the east coast you have 40 percent of the U.S. economy in a 300 mile radius. … It’s a great place for us to meet customers.”

This decision presented a problem for fundraising, however. Cooper thought he  could visit the West Coast once or twice a year to raise capital, but later realized that they’d need to build face time with prospective investors. This has made fundraising, “harder than I expected,” he said.

After the Tigerlabs experience, LifeVest decided to leave the Princeton area in order to have access to more talent. “In terms of attracting talent, being in a major city has its advantages. So the question became, do we go north to New York or south to Philly.” The startup has grown to include 12 people.

Later in the discussion, Cooper added that he had joined the accelerator after raising almost $1 million from angel investors. “We had a data product, but we didn’t have any clients. So, day one that we joined, we were very focused on client acquisition. That’s where the accelerator’s value came from. … Our first client was directly from the Tigerlabs network, a medical device company on the West Coast.” And many other clients came from “some degree of separation” through the Tigerlabs network.

Navarrete noted that his initial hope for the Tigerlabs accelerator was to engage students from Princeton and other schools from all over the country in a summer program that would take good ideas, make them into businesses and give the students the entrepreneurial bug. “After our second student class, we switched 100 percent towards healthcare. The reason why we evolved our model was really a reaction to the market.

“What we noticed with students is that, while they are very energetic and have great aspirations for their businesses, they also have this very high-class problem of being very recruitable and very employable, so that when things get hard in the world of entrepreneurship … they say, ‘this is very hard! And it’s the same thing day in and day out! And Google will pay me $150K a year.’” That’s why it didn’t work for Tigerlabs in terms of generating returns, he said.

“We found that our sweet spot was to be laser-focused on healthcare because that’s where we can bring the ecosystem to help companies.”

Navarrete also decided that “there’s no such thing as a one-size-fits-all accelerator. … Even by virtue of geography or industry or stage of growth, you just can’t replicate the model of 90 days, pump and dump.”

Tigerlabs prolonged its program because it was focusing on startup software companies that generally had longer sales cycles: 18 to 36 months. Navarrete also noticed that there was a “negative signaling effect” for startup software companies that graduated from accelerators in February or March because they didn’t have any contracts signed as of demo day. “I would rather my companies come through and graduate in August or September and get in front of the corporate purchasing cycle.”

The accelerator is “laser-focused on the quality of the applications I receive, not the quantity,” Navarrete said. Actually, most of the deals don’t come through the applications process, but through referrals. Application numbers are more of a vanity metric, he said.

Navarrete said that he would be fully invested in his current fund by the end of this year, so now he is out fundraising as well, trying raise money for a larger fund that will focus on pre-seed investing but will also expand Tigerlabs geographic focus outside of Princeton.

As far as the New Jersey tech entrepreneurial ecosystem goes, Navarrete reiterated some of what he had said elsewhere, especially his point that New Jersey’ tech ecosystem will grow when the notion of recycled capital becomes real here. “We need investors who have been successful, either by the virtue of being entrepreneurs or in their professional lives, to invest locally.”