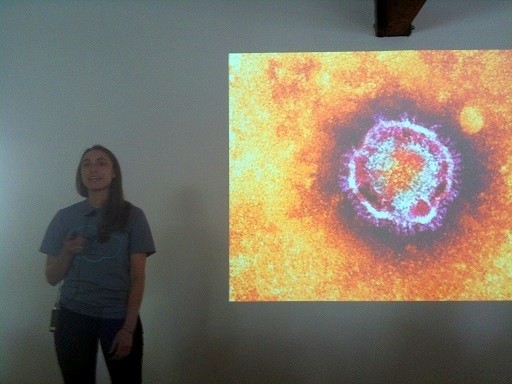 Tigerlabs Health (Princeton) showcased its first Healthcare IT cohort at a Demo Day on May 15, 2013. It unveiled an impressive group of six companies. Four of the startups had spent three months at the seed accelerator.

“What we’ve been doing is laser focusing on partnerships we had been forming with all of the industry in the Princeton area,” Bert Navarrete, Tigerlabs founder, told the investors, consultants, mentors and press who had come to see the demos. He thanked the program’s mentors, whom he said had spent countless hours and days working with the accelerator’s individual companies.

Many of the featured companies’ founders had Princeton University connections. Several startups came from Europe via Princeton. A number of the founders are returning to the places they came from, but some are staying in New Jersey as they develop their products further.

New York City Technology in Medicine: New York City Technology in Medicine is building out an iPhone app that can measure certain attributes of pupil dilation to diagnose a host of medical conditions. Speaking to the group, CEO Ryan Saleh said current methods of measuring pupil activity are very expensive or consist of shining a penlight in someone’s eyes and taking a subjective measurement. Mobile devices with high-resolution image sensors change that, he noted. The app takes a series of images over the span of two seconds. Cloud software compares the images to diagnostic algorithms, producing a result in a matter of seconds.

“We can do a robust neurological exam right from the device,” said Saleh. Cofounder Jeff Myers said individual apps to test for sobriety, sleep patterns and head trauma would be produced. The company wants to “white label” these apps so brands can offer them, he added. “Imagine a Heineken-branded sobriety app,” suggested Myers. An additional goal is to get this technology into every intensive care unit in the country, he stated. The company said it will close a round of seed funding in August 2013. The founders will be moving back to New York from Princeton and splitting their time between Princeton and a coworking space in SoHo, Saleh told NJTechWeekly.com.

CareTree.me: Traveling to the Tigerlabs accelerator from Chicago was CareTree.me. President Carl Hirschman — a serial entrepreneur with two successful exits — presented software that tackles a thorny problem shared by home health agencies, caregivers and the families they serve: communication. The company is selling a  Health Insurance Portability and Accountability Act (HIPAA)-compliant online portal to the largely low tech home health agency market. Caregivers currently use paper checklists to convey information to the agency by either driving it there or faxing it in. When a family member needs information for a doctor or a hospital, it takes time for the agency to get back to the family.

The portal centralizes information and connects all the stakeholders: patients, caregivers, families and doctors. “We’ve designed it to be as easy as Facebook to use, so anyone can quickly get the hang of it,” said Hirschman.

The company took the idea through Chicago Lean Startup Challengeand built a beta site. Hirschman said some of the big names in the home health industry have invested in the company. Brian Bauer, Princeton grad Dan Zauber and Albert Pak compose the rest of the team. Hirschman says his company is heading back to Chicago at the end of the month but had a fabulous time in Princeton and “is working on ways to make operations in both places work.”

LifeVest Health: This company — which has moved from Denver to Princeton — offers a clever solution to the problem that plagues corporate wellness programs: they fail to deliver a return on investment to the companies that employ them. Said CEO Jon Cooper, “We help businesses save money and improve the health of their workforce through a stock tied to health … . Improve your health and your stock value rises and you get paid. Neglect your health and the value drops and you pay the price.”

The LifeVest Health founders say their solution differs from outcome-based programs, through which users have to hit biometric thresholds before they are rewarded. “Those people who drive the majority of the cost see the thresholds and say, ‘I’m not going to get there this year and I’d be lucky if I will get there in three years,’ ” said Cooper. They are not rewarded if they lose 15 pounds, and they may need to lose 30, for example, he said. LifeVest’s solution rewards employees as they work toward their goals. Further, it rewards companies with a business model that says companies shouldn’t have to pay if people don’t change, said cofounder Mike Logsdon.

Plom.io: This startup, which created a lot of buzz among investors at the demo event, aims to create a public library of scientific models on the Web so scientists don’t have to reinvent the wheel. Founder Tiffany Bogich said she had spent the past 10 years making mathematical models of how quickly certain viruses like SARS are spreading and how they can be controlled. She became frustrated with having to recreate previously published work just to begin her own research. When a pandemic threatens, “we have no tools in the scientific community to collaborate to solve this problem,” she said.

Plom.io helps resolve these issues and others. For example, if there are flaws in the models used, when new data comes in or if the results change, scientists can change their model on Plom.io in real time, said Bogich, using version control.

Scientists can also comment on and review models online. The software can be applied to many scientific fields and extended for use in finance and pharmaceuticals, said Bogich. The founders have completed back-end development work and expect to publicly launch in early fall, but they need funds to scale their work. “The Plom.io team will be staying in the Princeton/NYC area to take advantage of the network of health IT contacts in the Princeton area and the growing tech community in NYC,” said Bogich. Her team includes Sebastien Ballesteros and Joseph Dureau, who are based in Princeton and Paris.

Two recent additions to the Tigerlabs Health accelerator are The DentBoard and Clue.

The DentBoard: The DentBoard, which came to Tigerlabs via Nashville and Princeton according to Navarrete, is developing cloud-based business intelligence software for dentists. Cofounder Caleb Bastian is a dentist earning a Ph.D. in mathematical modeling from Princeton. Dentists are leaving a lot of money on the table due to enormous inefficiencies in their practices, he stated. There are several crucial issues; patient satisfaction is one and insurance is another. Insurance companies are responsible for 60 percent of dental office revenue, but they try to minimize payments by delaying or denying claims. Furthermore, 70 percent of dental office expenses are for labor, but dentists have no way to gauge their employees’ productivity. Likewise, dentists don’t have a way to understand prevailing fees in their communities in real time, as information is often outdated and not granular.

The easy-to-use software — which already interfaces with popular in- use dental software — will help dentists better manage their practices and increase the standard of care, said Bastian. The company has already had a $200,000 seed round. Bastian’s cofounders include Jose Garmilla and Tim Kunisky.

Clue: Clue came to Princeton all the way from Berlin. CEO Ida Tin pitched her company, which provides women information about their fertility all through their reproductive days. “We are building an app and a piece of hardware to enable women to take out their phone to see if they can get pregnant on any given day,” said Tin. The hardware is in development, and although Tin couldn’t release details, she said it would interface with the body to provide real-time information about where a woman is at any given time in her cycle. The company will sell disposable components for the hardware via a subscription model, she told the group. Tin’s cofounder is Hans Raffauf.