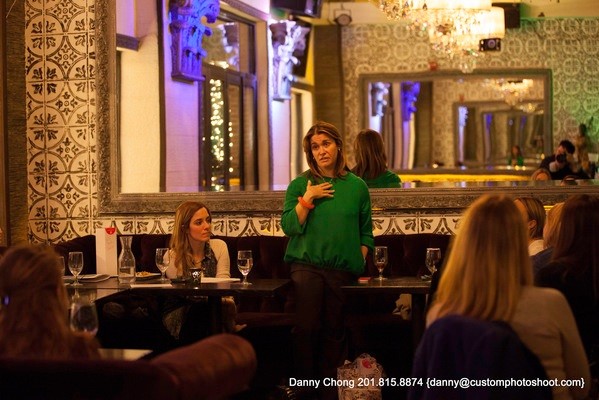 On March 27, 2013, NJTechWeekly.com attended an NJ Tech Gals meetup that featured serial tech entrepreneur Heidi Messer. Messer is most famous for founding, with her brother Stephen, the early Internet company LinkShare, which was sold to Rakuten (Japan) for $425 million in 2005.

The entrepreneur — who is now cofounder and chair of Collective[i] (New York), a big data startup, and cofounder and CEO of World Evolved, a platform for global investment and expansion — generously engaged the 25 or so women in attendance, answering every question her audience asked.

NJ Tech Gals arrived on the Hoboken scene in January 2013. Since then, it has attracted more than 170 members. Its organizers are Christine Curatolo, founder of Jumblzar (Hoboken), and Sarah Himmelbaum, founder of Mommies247.com (Hoboken). The group’s mission is to provide a supportive environment for tech entrepreneurs interested in building companies and who also happen to be women.

Asked where she found her inspiration, Messer replied, “One thing that is very hard about being an entrepreneur is that there is no path to success. In fact, you are entering a field where 85 percent of your colleagues will fail.” Although she comes from a family of entrepreneurs, Messer had thought she would follow a path with 100 percent security, which was law.

“When I found that security wasn’t what inspired me — in fact, that the security law offered was demoralizing — that’s when it became apparent that I needed to make a change. It also helps when you have a lot of family members cheering you on to make that change,” she explained.

Questioned about the biggest obstacle she had faced, Messer said there were many nights when she didn’t sleep. “I think it’s the hardest thing to do, aside from having children. There is no certainty to it and no outcome you can predict.” Once you start hiring employees, they are depending on you and your good judgment, she added.

2001 was particularly rough: “We had filed to go public, we were about to go on our road show and the market crashed. One of the things you do before you go public is you spend a lot of money upgrading your infrastructure … You scale up for what you think the next four quarters are going to be … We had done all that … and about a third of our clients within a three-month period went out of business. The revenue model worked, so we were paid after the client made the sale. It wasn’t as though we could withhold services in order to get paid.” Clients were hurting, and her company had spent cash on hand but wasn’t getting public money, she said.

“We ended up having to rightsize,” said Messer, meaning the company had to fire a lot of employees. “Looking at people who had depended on us, knowing they had children in school, knowing that we had heavily recruited them,” made this the worst experience in Messer’s entrepreneurial journey, she said.

Touching on the obstacles for women today in the New York tech world, Messer noted that she observes more obstacles now than when she had started out. She said she doesn’t see VCs and others give the same weight to a 25-year-old woman who has started a tech company as they do a 25-year-old man. “They don’t see the next Mark Zuckerberg sitting there,” she said.

“On the flip side, I hear a lot more dumb ideas from men than from women. They are just more confident about sharing them,” Messer noted. She added that women will think a lot harder about starting something that will succeed than a man might, because for women the cost of failure is greater.

To a question about what it is like to build a business with a family member, Messer replied, “I am the luckiest person in the world. My brother is one of my best friends. My other best friend is my husband, who is now our business partner … If you have someone you respect so much, who you think is a visionary, who is always on your side, who you have complete trust with, who — when you are at your lowest moment as an entrepreneur — can find the right way to talk you back up, … I’m the luckiest person in the world.”

Asked about the mechanics of working together, Messer said, “There are a lot more brother-sister combos and brother-brother combos than you think, even though VCs hate it.

“When I analyze what worked for us, I think we worked together well. We have the same work ethic, we have the same set of values, we had a nice relationship to begin with and we are good at different things. We are very self-aware of the things we are good at,” she added.

Messer noted that there were times her brother would ask her to handle certain tasks because she was better at them, and instances when she would ask him to take the lead because of his skill set. In 2001, when LinkShare was on the brink of disaster, a blame game never ensued, she said.