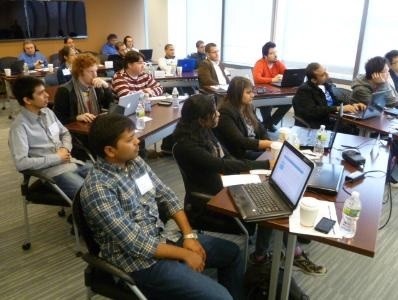 Students from area colleges participated in a network hackathon at Juniper’s OpenLab. | Juniper

When Juniper Networks cut the ribbon at its OpenLab in Bridgewater, it promised innovative programming that would bring local college and university students to the facility to work with the company’s sophisticated network simulators.

On Jan. 25 through Feb. 3, 2013, a Software-Defined Networking/Network Programmability Hackathon took place at OpenLab. The 10-day event was jointly sponsored by AT&T Foundry (Plano,Texas.) and Juniper.

Students were challenged to think about their experiences as consumers of network services like streaming video, mobile video and streaming gaming and to create a solution that would improve the quality of the user experience. They were to use data available through Juniper’s software developer kits and any other information service that was network-accessible.

The students included graduate-level candidates in engineering and computer science who already had backgrounds in networking and advanced Java programming, with a few advanced undergraduates also participating. NJIT served as the host school for the program, with   Professor Michael Ehrlich, who teaches at the New Jersey Innovation Acceleration Center at NJIT, contributing innovation and entrepreneurial content and delivering logistics coordination.

It was clear that the students valued participating in the hackathon, said Ehrlich. It exposed them to cutting-edge solutions that create software-defined networks. “The students were introduced to software tools that bridge [the gap] between traditional hardware networks and software solutions” and were able to solve “real-world problems using software-defined networks,” he noted.

According to a blog post by Hal Stern, chief architect of the Management and Virtualization Platform Group at Juniper, the students and companies learned several lessons from the exercise.

The first is that algorithm convergence matters, and what can be demonstrated on a small scale may not be what is seen in a larger context. “One of the benefits of greater centralization is that decisions can be made with more data, from more control points, resulting in less latency to execute and settle into an improved user experience,” said Stern.

Another point is that there is no perfect answer when dealing with “bursty” traffic and changing network events. The student teams that used predictive algorithms saw improvements in their results.

At the end of the day, three student teams — two from New Jersey and one from Pennsylvania — took home the top prizes.

According to Passione, the Penn team created a media server monitor solution that enabled the configuration of high and low thresholds for acceptable link utilization/performance.

In second place, the NJIT team of Mustafa Torun, Vivek Bhoj and Onur Yilmaz presented a “robust technical solution to the problem presented,” said Passione. The team was able to discuss other prospective methods for dealing with network congestion and offered flexibility in terms of monitoring either client-side or server-side links, he added.

The Rutgers team, which came in third, included Ayaka Koshibe and James Sugrim. Their presentation and solution discussed both throttling the application based on detecting link performance issues and “dynamic upsizing of network links” to address experience challenges.

Judging the hackathon were Stern of Juniper and Mark Folodare, principal member of technical staff in emerging technologies and service platforms at AT&T Labs. Also participating were some outside judges: Brian Donahue, whose startup, Echolocation, was part of the first class of TechLaunch (Montclair) companies, and Anish Desai of JuiceTank(Somerset).