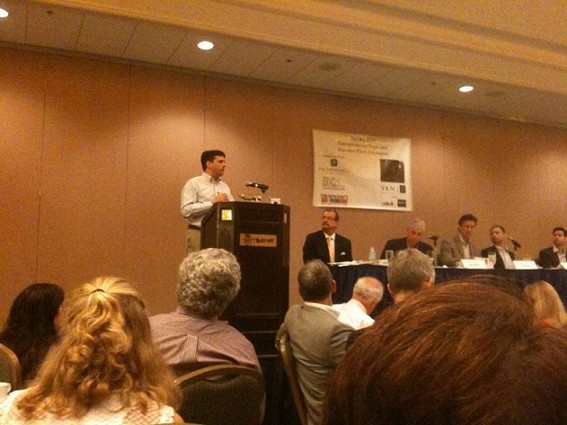 The panelists at the May 20, 2013, Venture Association of New Jersey (VANJ) Elevator Pitch Olympics provided hints and encouragement to startup entrepreneurs trying to fund their companies.

The panel was moderated by Ted Rosen, New York chair of the metropolitan securities practice at Fox Rothschild, who advised the entrepreneurs to hone their pitches and practice them over and over until investors can understand who they are, what their business is and what they are trying to accomplish.

In response to Rosen’s questions, the panel — made up of angels, VCs and even one crowdfunding portal developer — offered sage advice to the attendees.

Some of the panelists’ wisdom is summarized below.

From the general introduction:

In response to a question about valuations:

In response to a question about preparation:

Regarding a question about the presentation and the deck:

Replying to a question about projections:

[This is the second story on the May 20 VANJ event. The first was published here.]

Previous: Bulgarian Hacker Returns to NJ in Massive 2004 Stolen Credit Card Ring
Next: New Jersey Gives Innovation a Zone of It's Own