Home » News » What Should You Do When You Meet Sergey Brin in the Restroom? INVIDI’s Bruce Anderson Says “Pitch!” 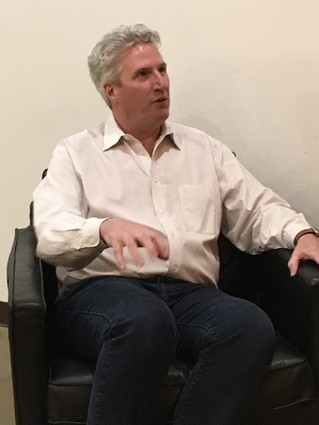 Tech entrepreneurs can spend months or years chasing investors to bankroll their companies. For Bruce J. Anderson, it took a brief chance encounter with a Google cofounder in a bathroom at the tech giant’s headquarters a decade ago. That eventually led to a multimillion-dollar financing deal for Anderson’s firm, INVIDI Technologies Corporation, a Princeton-headquartered provider of addressable television advertising services.

The Google restroom meeting was one of the many memorable experiences that Anderson, INVIDI Technologies COO and global CTO, shared when he spoke about his lengthy career during the February 22 Startup Grind meetup, hosted by David Stengle at Tigerlabs, in Princeton.

The discussion mostly focused on Anderson’s roller-coaster career in an industry renowned for its high-flying startups and big money deals. Anderson took the audience back to 2000, a year when promising young tech pioneers’ dreams of fame and fortune were dashed almost overnight, leaving behind a trail of failed startups, including the one that Anderson worked for.

In the late 1990s, when he became a vice president at DIVA Systems Corporation (Redwood City, Calif.), a provider of video-on-demand equipment and services, investors didn’t blink twice at lending staggering amounts of money to Internet-based startups and other tech companies that boasted “innovative ideas.”

But as with those companies, DIVA Systems’ dreams of great prosperity were short-lived. Within a month of the dotcom market crash in early 2000, the valuations of tech stocks were said to have dropped nearly a trillion dollars. And DIVA Systems was no exception.

Like many dotcom startups, DIVA Systems had been financed with high-yield “junk” bonds. So, when the dotcoms went from boom to bust, investors bailed out en masse from this type of financing. “DIVA had $250 million in junk bonds, and nobody would touch it,” Anderson said.

The market crash soon led DIVA Systems to file for Chapter 11 bankruptcy protection, forcing Anderson to take the unenviable job of shutting down the company’s operations and finding a buyer for its video technology patents and other assets. The parent company of TV Guide agreed to buy the company, but that deal fell through, causing DIVA Systems to file a $12 million lawsuit against TV Guide’s parent. DIVA Systems won the lawsuit, according to Anderson, and used the money to pay its employees.

Out of a job in 2001, Anderson started his own consulting business and in 2003 joined INVIDI Technologies, which was based in Canada at the time. “My job was to make the technology palpable to the U.S. cable industry and to make it appealing to investors.”

But Anderson found that there wasn’t much demand for INVIDI Technologies’ product in the Canadian cable television market. In fact, he met with stiff resistance from venture capitalists on both sides of the border.

Desperate for funding, Anderson began calling everyone he knew who might be interested in investing in the company. But he kept getting asked the same questions by potential investors: How are we going to make money from our investment in INVIDI Technologies? And why should we place our trust in you?

IVIDI Technologies, which had become a U.S.-based company because of the challenges in the Canadian market, arranged a meeting in November 2003 with a Silicon Valley venture capital fund in the hopes of securing financing.

Anderson recalled that “all the senior people had to give a thumbs up” in order for the company to get financing. The fund’s top executives were ready to sign off on the agreement, but one of them didn’t go along with the deal because INVIDI’s main customer was a cable television operator. The executive told Anderson that had he nixed the deal because cable TV companies were “incapable of doing anything right.”

The prospects for financing looked gloomy for INVIDI Technologies until another venture capital fund requested that the company make a pitch.

The meeting took place after one of the fund’s executives had received INVIDI’s briefing book from one of the partners of the Silicon Valley fund that had passed on the deal. This time, INVIDI received good news: Shortly after the meeting, the fund approved $12 million in financing for the company.

Five years later, INVIDI Technologies struck gold again, with the Google investment, at a time when investments in tech and other companies were quickly drying up because of the global financial meltdown.

INVIDI Technologies might have never attracted the tech giant as an investor if Anderson hadn’t accidentally bumped into Google cofounder Sergey Brin during that fateful trip to the restroom. When Brin asked Anderson who he was and what he was doing at Google, Anderson quickly launched into a one-minute pitch about his company, turned and quietly walked out of the bathroom, convinced that it was a long shot that Google would have anything to do with INVIDI.

Not long afterward, however, Anderson learned that Brin was so impressed with the pitch that Google wanted to invest in his company, and Google remains an investor to this day.

As the years passed, INVIDI Technologies continued to draw in more investors and customers, as demand grew for its technology, which enables advertisers to target ads at specific audiences. This type of technology has become increasingly valuable to businesses, as they are now using more data-driven approaches to generate sales.

In 2016, a consortium of cable TV, telecommunications and advertising giants, including DISH Network, AT&T and WPP, announced that it had acquired INDIVI Technologies. Following that deal, INVIDI Technologies’ investors received about three times the amount that they had initially invested in the company. Today, INVIDI’S software is estimated to be in about one-third of all pay television households.

Anderson’s experiences in seeking and securing outside funding have made him extremely fiscally conservative when it comes to keeping a startup afloat. “You’re trying to make the money last as long as possible because you don’t know when you’re going to run out of funds.”

While much has changed since the halcyon days of the dotcom era, founders of today’s tech startups can still make the same mistakes in building their companies that their predecessors did nearly two decades ago, Anderson told the group. To maximize the odds of a successful exit, “it’s important [that a startup] pick the right funds and have the right people on the board,” he said.