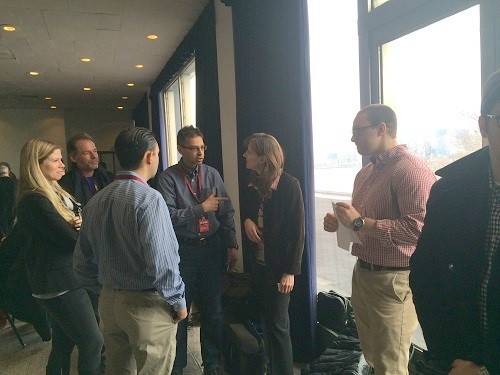 Hoboken Mayor Dawn Zimmer dropped by the second annual NJ Spark Summit, held at Stevens Institute of Technology (Hoboken) on Feb. 25, 2014, to tell the tech community it had not been forgotten.

“Despite any news you may have been hearing, I am extremely committed to building on what is happening here [in the tech community] and developing Hoboken into a tech hub,” Zimmer told the group of 225 gathered for the conference.

“I know we have Mission 50 [the successful Hoboken-based coworking space] here, but we want to expand on that, and through the redevelopment zones there are a number of opportunities available … . I understand that a number of you are trekking into New York City, and we want to have more of you over here in New Jersey,” stated Zimmer.

The city is diligently working on making Hoboken more resilient going forward, according to the mayor. “We are moving ahead with creating a microgrid, and we are in position potentially to have the largest microgrid in the country,” she noted.

Zimmer said Sandia National Labs is designing the microgrid for Hoboken through a large public-private partnership. “We look forward to partnering with MileMesh [the project resulting from NJ Tech Meetup’s reaction to the lack of post-Sandy communication] and connecting that into the microgrid,” she added. (NJTechWeekly.com covered the MileMesh project here.)

To create the microgrid, Hoboken will try to obtain as much grant money as possible and partner with Stevens, Zimmer said. The city will also be looking for money from the private sector, she stated.

“We will be laying fiber optics in the street, essentially expanding the capacity of Hoboken,” she said. Zimmer asked that anyone with expertise in this area who is willing to provide input contact her office.

The mayor addressed what is on everyone’s mind: Hoboken’s vulnerability to storm surges and flash flooding, which affects business. Flooding has reoccurred on several occasions, and Zimmer said she is committed to doing something about it.

“We are part of a HUD international design competition. There is a Dutch company working with us, and we have a plan that involves resisting those flood waters that came in from the south and the north, and delaying those flood waters with green infrastructure. We are buying more parkland and providing more storage,” explained Zimmer. The city is also putting in a full drainage system, she said.

Zimmer remained in the room after she spoke, saying she would take individual questions. She ended up staying nearly an hour, listening to feedback and taking audience members’ questions.

Earlier in the day, Stevens President Nariman Farvardin had welcomed the group to the university, explaining that he, too, is a startup company founder and that Stevens is committed to helping and nurturing tech entrepreneurs.