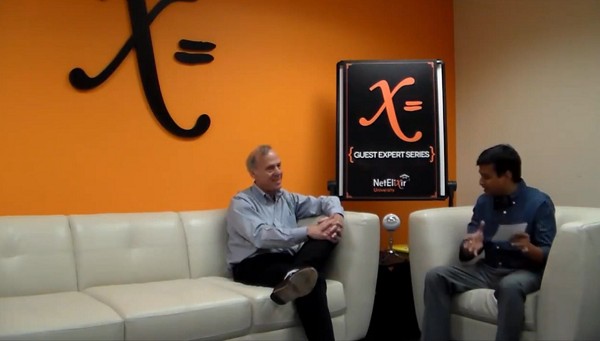 Author, entrepreneur, and Princeton University professor Derek Lidow shared startup advice during an interactive webinar on October 21. The talk was hosted by Princeton-based NetElixir as part of their “Guest Expert Webinar Series.”

Among other accomplishments, Lidow is a professor of entrepreneurship, board member at United Silicon Carbide, Inc., and founder of iSuppli, a market research firm he sold in 2010 for $100 million. He recently published a book titled “Startup Leadership: How Savvy Entrepreneurs Turn Their Ideas Into Successful Enterprises.”

Lidow was interviewed by NetElixir CEO Udayan Bose. Key pieces of advice from the discussion are featured below:

1: Entrepreneurship is about Making People Happy

“I would encourage the audience to look into design thinking methodology, where you go through some easy-to-understand steps to help formulate raw, rough ideas into something that ultimately excites the greatest number of people,” he added.

2: Relying on Venture Capital is Risky

Lidow suggested that most entrepreneurs would be better off without relying on funding from venture capitalists — especially since VCs only fund .2 percent of new companies each year.

“There are far less risky ways to start companies with the exact same potential,” he explained. “If you have a venture capitalist investing in your company, it doesn’t improve your chances of success. What it does is [improve] your chances of growing quickly. So in certain industries where there are network effects or economies of scale, that rapid growth phase can give you a distinct competitive advantage.” However, he said, that advantage does not exist in all fields.

Lidow said that he liked to think of entrepreneurs in two categories. “One is the high-risk entrepreneur,” he explained. “And that’s the entrepreneur that’s very ambitious and wants to grow very quickly.” These entrepreneurs typically rely on venture capital and have a relatively low success rate because they encounter a lot of competition for resources.

“Then the more traditional type of entrepreneur is really the ‘bedrock entrepreneur,'” Lidow said. “They generate 90 percent of all the value generated by startups.” He added that bedrock entrepreneurs are patient and don’t like risk, “so they believe in slow and steady growth.” These entrepreneurs stick to their areas of expertise and have a strong sense of how they can create value for others.

4: The Most Common Mistake is Forming a Bad Team

“Most entrepreneurs falter in the creation of their initial teams,” Lidow said. “They may not be very self-aware, so they might bring people in that think just like they do, rather than complement their skill sets and their thinking styles. And that results in most founding teams falling apart within the first year or two. And when the team falls apart, then the company completely loses its momentum, its morale and basically stops existing.”

5: Leadership Can be Learned

“Leadership is a set of skills,” Lidow said. “It’s not traits, it’s not something that you need to be born with, it’s not charisma. It’s actually — in the case of entrepreneurial leaders — five very specific skills. And these skills can be trained.”

According to Lidow, the five skills are:

Self-Awareness: Lidow said this involves knowing “what your capabilities are so that you understand what you’re going to contribute to the team,” and what others must contribute.

Motivating Others: “Motivating others is how you create excitement in large groups of people” and get them to support a vision, Lidow said. He added that it’s important for supporters to feel a sense of reward and purpose from their efforts.

Leading Change: Lidow said this is an important skill because things change very rapidly in a startup. However, “it’s quite difficult to get people to embrace change,” he explained. “And that’s a huge skill for a leader to have, is understanding exactly what you do to make people feel comfortable in adopting change rather than resisting it.”

Using the Right Kind of Leadership at Each Stage: “An enterprise matures just like a child,” Lidow said. “And you wouldn’t think about serving pizza to an infant, and you wouldn’t make teenagers very excited about eating baby food. So you have to feed the enterprise exactly the right types of leadership at the right stages of its maturity. As it goes from being just your idea to ultimately being something that produces value and is completely self-sustainable.”