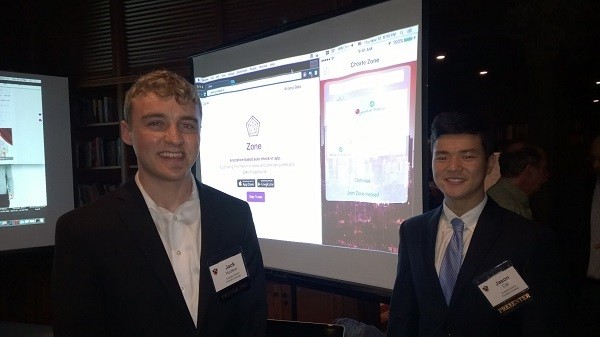 The guests enjoyed complimentary drinks and hors d’oeuvres throughout the evening as they viewed displays explaining each project. They could also speak directly with the innovators to ask questions.

For example, students Jack Hudson and Jason Cai discussed their new app, called “Zone.” This app offers a simple way for people to register when they attend events. The idea was conceived when the students stood in line for the HackMIT hackathon.

“We were standing in a 150-person line for the most technologically advanced event in the country,” said Hudson. “And we thought, ‘This is a very antiquated problem, just to stand in line and sign the form saying my name and my shirt size.’ So we thought it’s a very easy problem to solve by just having a phone app. … Instead of you having to stand in line and register, you just step onto the location and it automatically registers for you.”

While Hudson and Cai showed off their software, engineering professor Ruby B. Lee explained some hardware security innovations that she had developed in collaboration with her own students. These included:

·       “Bastion” — Hardware that gives software a secure place in which to perform tasks.

·       “Newcache” — A cache that uses randomization to stop hackers from finding secret keys during cache attacks.

·        “DataSafe” — A combination of hardware and software that encrypts data and maintains a security policy for protected data across multiple computers. Lee calls this “self-protecting data.”

“The security world is used to people thinking about software as the solution for security, but software is easily compromised,” Lee told NJTechWeekly.com. “And so it’s quite novel to think of how hardware can help in making the systems more secure.”

She added, “People just have to realize that good hardware security takes a little bit longer to implement than software patches for bugs that are found — because there is a slightly longer design time for hardware to get into products.

“However, changes in the hardware are not inflexible. They can solve a whole bunch of problems very flexibly, and we can solve it in a more fundamental way. It’s like making sure your foundation is good, rather than changing the paint color, or the doors, or the windows.”

Lee’s students weren’t the only ones working on computer hardware. Physics professor Jason Petta and his student Yinyu Liu told attendees about their project, a microwave laser that has potential applications for quantum computing. These lasers use two “quantum dots” — crystals of semiconductor material — to carry currents and emit photons. They can also operate at the cryogenic temperatures required for quantum computing.

Liu said they wanted to develop a laser that only used one quantum dot, but “for now we still need two” to produce enough microwave radiation.

Another team’s research uncovered a way to measure a battery’s charge using sound waves. “In a few words, it’s ultrasound for batteries,” said team member Barry Van Tassell. Sound travels differently through a charged battery versus a drained battery, so “this gives us a way to look inside the cell and see how the materials are changing in real time,” he said.

About halfway through the reception, the innovators and guests turned their attention to speeches from Princeton University officials. Dean for Research Pablo G. Debenedetti thanked supporters and praised the benefits of Princeton’s educational programs. He then introduced John F. Ritter, director of Princeton’s Office of Technology Licensing.

Ritter told the audience about Princeton’s efforts to support inventors and entrepreneurs. “Our [intellectual property] accelerator fund, for example, provides small amounts of seed capital that can greatly assist Princeton researchers’ efforts to bridge the so-called ‘valley of death’ between early-stage basic research and viable technologies that can benefit society.”

He also talked about the new executive-in-residence program, which allows students, faculty and staff to learn from experienced business leaders.

Provost David S. Lee detailed additional support services provided by the university. “Perhaps the most visible of these is Princeton’s Entrepreneurial Hub, which opened its doors this summer in downtown Princeton,” he said. “ The hub provides coworking space for new startups and serves as a central location for workshops, educational programming and interactions with the community.”

Lee also mentioned a new position at the Office of Technology Licensing “to advise faculty, staff and students who want to bring discoveries made on campus out into the world for societal benefit. I’m pleased to say that hiring for this position is in the works.”

After the speeches, the attendees continued to mingle and observe the other projects. These included:

·       A test that measures a woman’s biological clock by diagnosing the status of her egg cells.

·       An antibiotic that makes bacteria weaker against the human immune system.

·       A method for sustainable cement production.

During his speech, Debenedetti expressed high hopes for each project team. “These students will one day become professional researchers, faculty members, policy makers and industrial leaders,” he said. “An education at Princeton, including experiences with technology transfer and entrepreneurship, lays the groundwork for the building of future companies and industries and helps make the world a better place.”

Previous: 5 Key Pieces of Startup Advice from Author and Entrepreneur Derek Lidow
Next: District and Charter School Students Come Together to Learn Coding