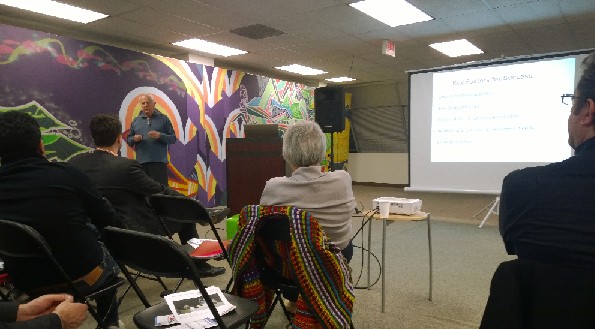 Killion has a long history of business accomplishments, including founding the successful Country Music Magazine and taking over his father’s company, Killion Extruders. He is currently managing general partner at the Eagle Rock Diversified Fund, and is cofounder of and partner at Bluestone + Killion, which provides professional networking guidance.

Together, Killion and Chapman own Walnut Farm, where they have spent years raising and training thoroughbred horses.

Below are five tips from Killion, who spoke most of the time during the event:

Killion emphasized the importance of resourceful, outside-the-box thinking in the face of business challenges. Even when entrepreneurs feel as if they’ve hit a brick wall, “There’s always another way,” he told the audience.

Killion talked about the times when such thinking helped him succeed in business. For example, “I’ve had great success finding really top-talent people in crazy places,” he said.

He explained that, after his father’s death, he had to hire an additional person to help him run Killion Extruders. “So I ran an ad and I start interviewing swanky guys in three-piece suits,” he said. However, none of the candidates were a good fit.

So, he then called Montclair State University to ask if they had any “really bright, exceptional seniors” who were going to graduate from the school’s polymer program.

The university recommended one student, whom Killion then spoke with. The student was also negotiating with IBM, and Killion could only pay about 60% of what the computer giant was offering. But he told the student that, “If you stay here and we make this, you’re going to learn how to start your own company.”

The student ended up working with him for eight years before starting his own business.

Killion also explained how he had used outside-the-box thinking when purchasing Walnut Farm. He and Judy had to match the highest bid on the property, so he contacted the U.S. Department of Agriculture and asked if there were any programs available to help people buy farms. The Department of Agriculture asked him to put together a business plan and to come up with a certain amount of equity. Then, “they would loan us the rest of the money.”

Killion next turned to his fellow investors in Country Music Magazine, offering to sell his stake in the publication. Instead, they lent him the money to help buy the property.

“So Judy and I bought 50 acres with a thousand dollars,” he told the audience.

Creative thinking also helped Killion when he started Country Music Magazine. He told the crowd that he “didn’t want to go through the agony of sending out subscription offers” and getting low response rates. Instead, he sent one free copy of the magazine to hundreds of thousands of country music fans. “Every issue, we’d get five or six thousand” new subscriptions, he said. In time, they gradually reduced the number of free copies sent out.

“So I guarantee you, whatever kind of business you’re trying to start, if you think about it creatively enough and hard enough,” you will succeed, he said.

Killion also emphasized the connection between networking and professional success. “I think networking and relationship-development skills should be taught in every school,” he said,  adding that they should be given the same importance as reading, writing and math.

Killion believes that “if you’re not good at building relationships that can be used to accelerate your careers,” you will appear unremarkable to potential business partners.

He added that the world was moving too fast and getting “too complicated to try and do everything yourself.”

However, Killion himself wasn’t always good at networking. “I was clueless about networking up until I was about 30,” he explained. But he added that, with practice, “I went from being terrible to then being pretty good at it.”

Killion now has a breakfast meeting with a different person nearly every day to network and share ideas. He told the audience that he recommended devoting at least five hours a week to networking.

3. Know When (and Where) to Look for a New Perspective

“I see a lot of people who fail because they think they’re an expert,” Killion said. “If you want to learn something about this, watch Shark Tank.” Business deals often get rejected on the program because entrepreneurs overvalue their businesses, he said. They don’t know how to scale them, or the margins aren’t high enough.

He also explained how getting input helped him start Country Music Magazine. At first, Killion knew nothing about this music genre. So he went to a country music bar to do research and asked the waitress a number of questions. Eventually she asked why he was there, and was excited to learn that Killion was starting a magazine devoted to country music.

She and her husband invited Killion to their apartment, where they advised him on whom he should work with and which topics would be important to country music fans. “And that became the roadmap” for starting the magazine, Killion told the audience.

4. A Few Trusted Team Members Can Change Everything

Killion said that he had once asked CBS television network founder William Paley how many truly exceptional people helped him run his organization. Paley could name only three people.

Since good talent is hard to find, “picking partners is really critical,” Killion said. He emphasized that entrepreneurs should ensure that their team contains exceptional people who can execute important tasks effectively. “I’d rather have a mediocre idea with great execution than a great idea with mediocre execution,” he explained.

Killion also said that, even when he and his partners fought, “we trusted each other. And if you can’t trust the people you’re doing business with, you’re screwed.”

“I’ve looked at a lot of deals where a guy thinks he has a company, but what he really has is a product,” Killion said.

He proceeded to tell an anecdote about a man who approached him with a business idea. The man wanted to sell a device that was similar to “a walking stick with a video camera on it for the golf industry.” The device was intended to be driven into the ground and stood upright so golfers could record their swings. Killion’s response to the man was, “That’s not a company — that’s a product.”

Killion also told the would-be entrepreneur that his idea for the device would probably be stolen if he attempted to build a company around it. Instead, Killion suggested that he pursue a joint venture with somebody who sells similar products on TV.