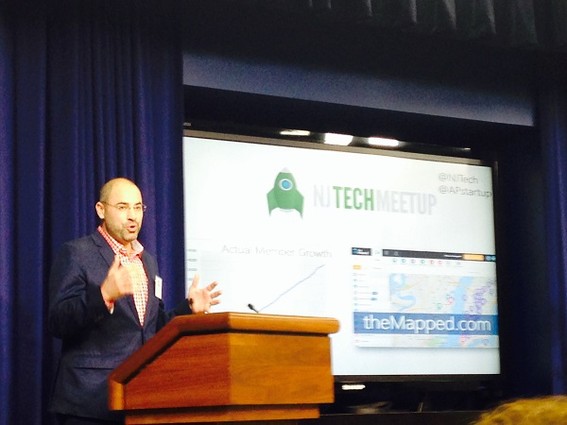 On April 17, approximately 150 tech organizers from all parts of the United States gathered at the White House for the first White House Tech Meetup.

Representing NJ Tech Meetup was organizer Aaron Price, who told NJTechWeekly.com that this was a thrilling, humbling and inspiring experience for him.

“Having the White House invite us there was extremely validating, not just for us, but for the communities we represent,” he said. “It means that what we are involved with matters, that it’s part of something bigger.”

The goals for the meeting were: to enable the attendees to help each other thrive by sharing best practices and by scaling outreach and inclusion efforts, to find ways to help more of their neighbors join in (especially those who have been less well-represented in tech) and to engage young people.

The organizers incorporated the “high five” that Price uses at each NJ Tech Meetup event as a way to get people to know their neighbors. And there was a moment at the White House when everyone stood up and gave each other a high five.

During his talk, Price introduced The Mapped, the NJ Tech Meetup volunteer-developed website that allows communities, individuals, companies and others in the tech ecosystem to put their entities on a map so that others can locate them.

“I brought up the idea that there is a lot of [tech entrepreneurial] activity going on around the country, but it is very hard to see what it is,” he said. Price was gratified by the reaction his idea received from Megan Smith, White House CTO. “She loved the concept and was very eager to see if the data they [the White House] have collected could be imported into The Mapped.” The program is still in beta.

“One of the biggest lessons I learned was that there are passionate people on the very local level all around the country, really trying to empower and educate and inspire their own tech entrepreneurial communities,” Price noted.

“It also struck me how much diversity of race and gender was represented,” he said. “Diversity was a big topic at the meeting, trying to figure out how to make tech entrepreneurship welcoming for diverse groups. One of the reasons that I like technology is that it is a democratizing tool and knows no race, color or gender.”

The discussions made Price think about how the NJ Tech Meetup could be more inclusive. “Are we appealing to a wide enough audience? This isn’t just something for a bunch of technology geeks. It can be for all sorts of people,” he said. “There were a few groups at the meeting that focused on how to code, and it struck me that we should think about how we can teach more specific skills.”

Price met some interesting attendees from other parts of the country. He spoke with the organizer of a tech meetup group in Seattle and with a guy from Alaska, and sat next to someone who runs a group in Kentucky. He also learned about groups “right in our back yard” that he hadn’t heard about, like Code Crew (Harlem) and a meetup in the Bronx.

According to Price, the groups attending the event had different formats: Some were only for networking, some did startup demos, some brought in speakers and some held conferences.

“We shared a common bond in being excited about what is going on in the startup and tech world, and wanting to help people be a part of it, to bring a sense of community to it,” he said. “Whether it was a group with a couple of hundred members in the middle of the country or a several-thousand member group in a larger location, we are a part of something much, much bigger.

“I really felt that I was among a group of peers who really understood the sorts of things we were trying to do.”

Price was also struck with how involved Megan Smith and her staff were. “They were not just facilitating, they were part of the event. I was impressed with how active they were and also how in touch with the community they were,” he said. “They brought a lot of energy and ideas. … People should be pleased to know she and her group are representing our community in the White House.”

Politics aside, Price concluded that the “White House is a really inspiring place to be, and to be on the inside of that facility, looking out at people taking pictures of the White House, is something I won’t forget.”