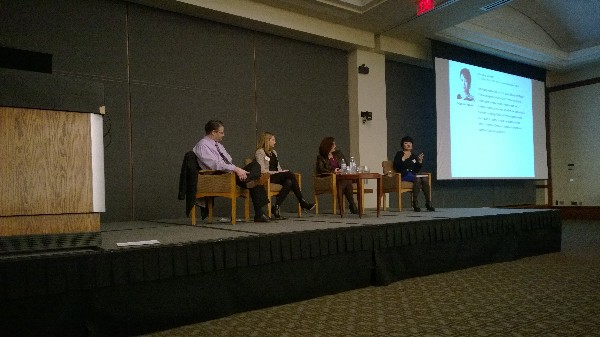 “When I heard this, I felt like it’s the beginning of the Wild West.”

That’s what marketing expert Jennifer Shaheen said about the recent introduction of over 1,000 new generic top-level domain (gTLD) names, when she participated in a panel discussion hosted by the Montclair Entrepreneurs meetup group on March 18, at Montclair State University.

The gTLDs have historically been limited to a small number of domains like “.com,” “.org,” and “.edu.” But the flood of new options has created both opportunity and uncertainty.

The new gTLDs were chosen from 1,930 applications submitted to ICANN—a nonprofit organization responsible for approving new gTLDs and deciding who has the rights to sell them to the general public.

Starting in January 2012, organizations could propose new gTLDs to ICANN. If the proposed domains were approved, these organizations earned the right to sell them. Many new gTLDs have attention grabbing names like “.coffee,” “.ventures” and “.ninja.”

The application process ended in April 2012, and the new gTLDs were introduced starting in February 2014. However, many of the approved domains have not yet become active because the logistics are still being hammered out.

Additionally, some gTLDs were proposed more than once by different organizations. Many of these duplicates are still in contention, and the rights to oversee them will eventually be sold to the highest bidder.

Audience members learned about this process during the highly interactive panel discussion, which was moderated by David Postolski, an intellectual property attorney at Gearhart Law (Summit).

The panelists included Shaheen, president of marketing company Technology Therapy Group(White Plains, N.Y.);  Demi Wang, director of the U.S. Liaison Office at the Chinese law firm NTD Patent & Trademark Agency Limited; and Maranda Woody, manager of marketing at Afilias (Dublin, Ireland, and Philadelphia). Afilias is a registry operator, meaning that it keeps track of certain gTLDs and the people who have permission to use them.

Five tips emerged from the discussion that tech entrepreneurs can use to their advantage:

Woody advised the audience members to look for new domain names before they are bought by someone else. Otherwise, she warned, entrepreneurs may say “I wish I had thought of that back then when it was available and I could get it for twenty dollars a year.'”

She also told audience members to stop thinking with the “.com” mindset,  in which people assume they cannot get an effective domain name because most of the ones ending in “.com” have already been taken.

She told the group to look for gTLDs that are relevant to their businesses. For example, while the domain “nyclawyer.com” may be taken, “nyc.lawyer” could still be available.

Domain names with clear meanings can be effective marketing tools. One audience member used the example of coffee.club as a successful domain name “because people understand exactly what it is—it’s a coffee-of-the-month club.”

Similarly, using area-specific gTLDs like “.nyc” or “.vegas” can make it easier for people to know that they’ve found a business in their desired location. For example, The Shubert Organization, a New York City theatre group, can be found at “shubert.nyc.”

“If you’re working in a certain area of the country, these local [gTLDs] can be really powerful, especially when people want to work with local businesses,” Shaheen said.

Some companies have profited by registering domain names for a specific advertising or marketing campaign. These domain names may contain a slogan or tagline. Shaheen used MasterCard as an example. The credit card company, which often uses the word “priceless” in its commercials, owns priceless.com in addition to mastercard.us.

Similarly, marketing company MSCO‘s primary web address is “msco.com.” But they also registered yourmarketingsucks.com and advertised this domain name to get people’s attention.

It may be a while before most consumers trust the new gTLDs. “There’s going to be a transition period” for new domain names, Woody explained. “People don’t know that they exist, and they won’t necessarily trust a website on that domain.”

She also speculated that awareness will increase when large companies start registering domain names with the new gTLDs.

Remember That the Future is Still Unknown

Although the panelists offered advice, they reminded audience members that it’s still difficult to predict how new gTLDs will affect business.

This is partly because people will use the internet much differently in the future, Shaheen said. She pointed out that, increasingly, “people are going into apps more than they are going into websites. And that doesn’t mean that websites are going away, but it is changing how we’re starting to look at things.”

Postolski pointed out that many of the new gTLDs are actual words, like “.football.” Conversely, most of the older gTLDs like “.com” are not words. “So how that affects search engine optimization remains to be seen,” he said.

Woody reminded the audience that most new gTLDs have not even been in use for a full year. Additionally, hundreds of approved domains have not become active yet. Some of these, like “.app” and “.web,” are expected to be especially popular with the general public.