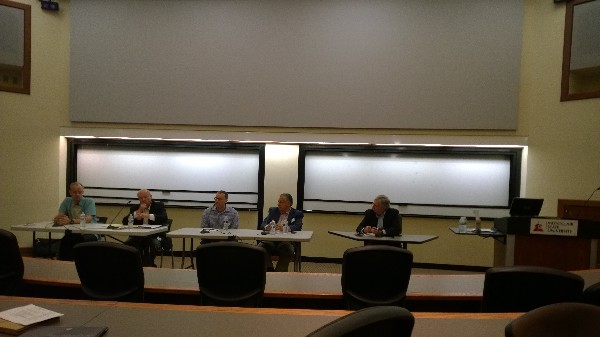 More than 250 tech enthusiasts gathered at the conference to learn about new Google offerings. The conference was held in conjunction with the Google I/O developers’ conference in San Francisco, and was organized for the second year in a row by Google Developer Group: GDG North Jersey.

The members of the “Investing in Jersey” panel were:

Dennis Bone, who runs Montclair State’s Feliciano Center for Entrepreneurship, moderated the panel. Six key pieces of advice that emerged from the discussion are highlighted below.

1. The Team is More Important Than the Product

Smith said that “probably 90 percent of investors are going to say that they invest in teams over ideas and products. Personally, when someone comes up to me and wants to really talk about their technology, they almost start doing themselves a disservice at times, because investors invest in businesses, not in products.”

2. Team Members Must be Compatible with Each Other

Casabona explained that while ideas and individual team members may be important, “What I’m also looking at is, ‘Has the team worked together in the past?’ Do they know each other? Have they graduated from the same high school? Do they have the same culture?’

“And the reason being is because once you get into a very stressful situation, which is building your business, you find out that some characteristics of the individuals just break the team apart. And I’ve seen this half a dozen times over the past three years.”

3. Relationship Building is a Vital Skill

Creighton told audience members that “The attribute that I look for in a [founder or CEO] is somebody who can build relationships. A relationship person is going to be a winner. That’s your natural entrepreneur that can get things done.”

He added that such people “can build their channels, they can bring in developers, they can understand the marketplace and they can figure out how to get people to work for them, with them, around them.”

4. Be Specific About Who Will Join the Team

“What you need to tell me is ‘I know I need a CEO, the person I have in mind is John Doe or Mary Doe. I’ve known her or him for the past three years. They’re going to join the team once I have enough funding.’ So I want to hear the next step. Just the fact you acknowledge you need a CEO function, that’s not good enough.”

5. Dig for Your Funding

A business lawyer in the audience asked if his “raw startup” clients with no previous revenue could find funding opportunities.

Smith responded, “For me personally, since my investing and financing in companies is in the form of debt, revenue is a requirement because you obviously cannot pay back debt if you don’t have any revenues coming in the door. As for other funding sources outside of equity, there are some on the federal level still, if you’re doing more research and development.

“One very untapped type of resource, especially in the bio science area is—I would call it not charity, but interested parties. So if you came to me and you had a medical device that worked with paraplegics, I would instantly want to know if you’ve spoken with someone from the Christopher & Dana Reeve Foundation, or another source like that.

“There are huge, huge foundations out there that are actively investing. They’re not going to say it. You’re going to have to dig down into their website. But they’re putting money out into companies like that.”

6. Conflicting Advice Can Still be Useful

Wisniewski said, “These are great answers. They’re additive to each other, right? I think one of the challenges as an entrepreneur when you’re listening to panels like this, or getting advice off the Internet—there’s sort of no shortage of advice. That’s not the problem, right? And a lot of times it’s conflicting, or feels like it’s conflicting.”

According to Wisniewski, advice is often conflicting “because there’s no one answer.” He explained that “what you’ve got to search for is sort of a level below what people are talking about.”

Wisniewski urged the audience to analyze the oft-given advice of angels and VCs. “Of course the entrepreneur is important, but, of course, the business plan is also. So try and integrate it at a level below. Hear [the advice] enough times, you start to develop an understanding of the ‘why’ behind it. Why is an entrepreneur important? … Why is the business plan also important? Start to accumulate these opinions and such, and develop your own understanding a level deeper.”