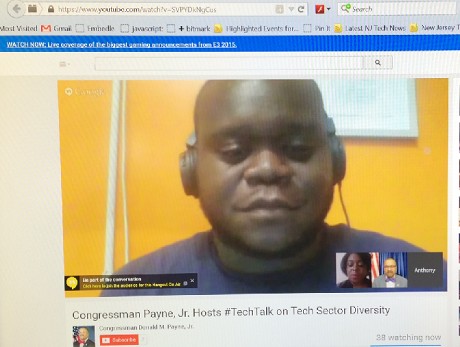 Participating in the Hangout was Newark tech activist Anthony Frasier, cofounder of The Phat Startup and organizer of Brick City Meetup, and Kimberly Bryant, founder of Black Girls Code.

The Phat Startup is a media company that produces premium content for all levels of entrepreneurs. The company was inspired by the Lean Startup methodology and hip hop culture. Black Girls Code is an organization that focuses on alleviating the tech divide by introducing girls from underrepresented communities to computer programming and technology.

Payne went on to talk about a research finding that, at seven Silicon Valley companies willing to release their data, only 2 percent of the employees were African American. “That’s a frightening, stagnant number,” he said, demonstrating the lack of opportunity for African Americans in the industry.

Given the rate at which universities are producing qualified applicants, there will be many more jobs in tech fields than people to fill them in the coming years, so there is an opportunity for minorities to get those jobs, he added.

On May 19, the Congressional Black Caucus issued its CBC Tech 2020 initiative, which seeks to expand opportunities for African Americans in the tech industry. The initiative is based on four principals: transparency, education and training, corporate responsibility and investment, and hiring and retention.

Bryant said that her organization is a chapter-based nonprofit teaching girls mobile applications development and website skills. “We engage in robotics and really help to build the pipeline for these young women into the tech industry, doing that by introducing them to the skills as well as [providing] mentorship opportunities.”

Discussing her background, Bryant said, “My guidance counselors at high school encouraged me to pursue the field of engineering.” She went to Vanderbilt University, where she received a bachelor’s degree in electrical engineering, with a minor in computer science and math. “I started my career in the pharmaceutical industry, found my way to a biotech company, and I started to tap back into the technology training I had years before,” she said. Taking a break from the corporate world, Bryant dove into technology, and noticed that while technology was booming, there were very few black women involved.

Frasier said that he had gotten into technology after going to Essex County College. He created a gaming website where people talked about their games and shared reviews and previews. His website was getting hundreds of thousands of hits a month, and he used that success as leverage to get an internship at a startup.

Answering a question about barriers for entry into tech for African Americans, Frasier said that his biggest barrier was location, being on the East Coast rather than in Silicon Valley. He also said that he wasn’t in any networks that could help him figure out how to raise money, or whom to talk to. “Those are the things that a lot of people who come from my background just don’t have access to.”

Bryant said that the biggest barrier for women was access to capital. “VC capital is the fuel for the engine in the startup economy, especially in the Bay Area,” she explained. “I see a lot of new entrepreneurs that don’t have what they need to get their ventures off the ground. This comes down to … getting the network that will get you into the meetings on Sand Hill Road.”

Payne agreed that access to capital is a barrier for minorities across all industries. The definition of a “small business” according to the Small Business Administration (SBA) doesn’t fit most businesses, he pointed out. The congressman added that he was working to get the SBA to address the needs of really small businesses, such as startups.

Bryant said that the lack of access to capital unnecessarily discouraged many of the entrepreneurs she had met. In many cases, she said, it slows them down and keeps them from going to market. Remedying the situation would allow these entrepreneurs to build larger and more sustainable businesses at a “comparative pace to their peers in the industry.”

Payne asked Frasier how the community could hold tech companies accountable for improving their diversity numbers. “Basically, by being vocal about it,” Frasier answered. He referred to the Rev. Jesse Jackson Sr., who is holding companies accountable by “calling them out. It puts the feet to the fire for a lot of those companies.”  He also suggested keeping the issue in front of media outlets in the communities, so the topic doesn’t drop from the news cycle.

Payne spoke about Newark’s success in attracting some national tech companies like Audible.com (a division of Amazon and Panasonic), in which he had played a part. Then he asked Frasier if he saw Newark becoming a technical hub.

Frasier replied, “Most definitely!” He noted that, just last year, he wouldn’t have been sitting in a coworking space in Newark, but he was now broadcasting [during the Google Hangout] from =Space, a coworking space that had recently opened in Newark. “We have multiple tech meetup groups, even a Google Developers group that is here. NJIT is here. Rutgers Business School is here. We have over 40,000 college students in the area. Every day there is a new event going down that is helping people.” Frasier mentioned Code for Newark, and the NJIT Enterprise Development Center (which is housing 90 companies).

“We are growing at a steady pace,” he added. “It’s slower than other areas, but I think that’s because Newark is different. We can’t copy and paste solutions from Silicon Valley or from New York City. We have to come up with our own unique solutions, and that’s what we are doing here.”

The video of the Google Hangout can be found here.