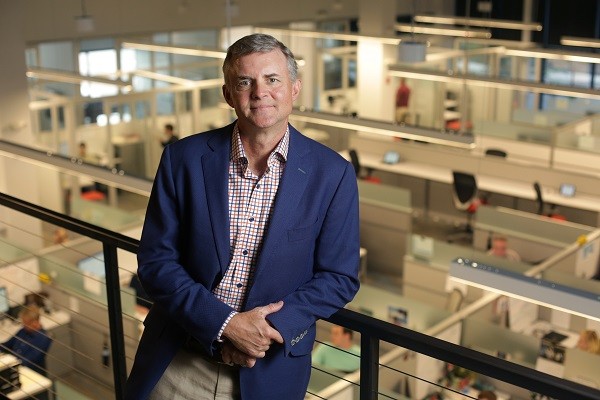 Thomas Fahey is president and CEO of HCS. | Courtesy HCS

HCS (Wall Township), a healthcare information technology company, has a history going back almost 50 years. And that history is synonymous with the name “Fahey.”

Tom Fahey is the current president and CEO, but it was his father, Joseph, who founded the company along with Joe Manzi in in 1969. It was initially called “Hospital Computer Systems,” but then renamed “Health Care Software, Inc.” in 1996.

Today the company offers a suite of enterprise-wide solutions related to financing and electronic health records for the long-term acute-care hospital (LTACH), nursing-home, and behavioral-healthcare industries. Its New Jersey location employs 65 people and is currently seeking to add to its software-development team.

“My father started his career working for IBM after he graduated from college,” said Tom. “He was actually a Division I basketball player for L.S.U. [Louisiana State University]. He was in Philadelphia selling what started out to be punch cards and ultimately became the IBM System/3, which was the predecessor of many of their larger computer systems.”

The elder Fahey was then transferred by IBM to Fort Monmouth, but he eventually departed and accepted a position at Monmouth Medical Center, in Long Branch, as a project manager. “They were instituting a new project to computerize the hospital,” recalled his son. “It was a joint effort, ironically, between Monmouth Medical Center and IBM at the time.”

Joseph Fahey oversaw the project, and his functions included figuring out how the various users would interact with the systems. Those automated systems would eventually become what was called an “order entry system.”

“A nurse would have – and it wasn’t even a keyboard – it was just a large input device where they would say ‘lab order,’ and it would communicate through the lab, letting users know that a laboratory order was necessary at this particular nursing station,” said Tom. The project garnered much attention.

“It was quite successful. It was actually featured on a Walter Cronkite television program way back when. He had a special ‘60 Minutes’ kind of thing where he did a snippet on computerization in healthcare, and that installation at Monmouth Medical Center was featured.” Representatives from IBM and from national and international groups came and observed what Joseph Fahey and crew had accomplished. “He [Joseph] liked to say it was the first hospital information system in the country.”

What did Joseph and his cofounder, Joe Manzi, a systems director at the medical center, know at the time? Tom said they recognized that technological advancement was knocking on the healthcare door.

“Healthcare is unbelievably complicated, and there are a lot of moving parts, especially when you look at a hospital,” said Tom. “The traditional physician?patient relationship is relatively straightforward, but when you get into a hospital, with all the various disciplines, departments, facilities, and billings – there are just so many moving parts.” His father saw all the opportunities that were evolving outside the healthcare field due to technology, and thought that technology could make a difference in the healthcare world, as well.

By 1977 HCS was in eight New Jersey hospitals. Now the company has approximately 5,000 service locations, supporting healthcare in 42 states.  Its product is “HCS Interactant,” a fully integrated clinical and financial information system. “It’s anything that touches the engagement of the patient for a healthcare provider in a particular vertical that we support within healthcare,” said Tom.

Once healthcare providers have entered the requisite information about the patient into the system, doctors and nurses will begin the course of treatment, and they document it using the HCS Interactant system. Payments are also handled through the system, as are accounts payable, general ledgers, and other financial accounting packages.

As mentioned above, HCS operates in the LTACH space nursing homes, long-term care facilities, and behavioral healthcare. A peek into the future unveils possible expansion into home healthcare.

Darren Yonkin, the company’s CTO, is referred to as the “captain of the ship” by Tom Fahey. “As much as I’m the driver of the ship or the boat, he’s truly the captain, if you will, because in technology you need to make aggressive, but conservative decisions with regard to the direction of your platform.”

Tom called HCS software “mission critical,” explaining that “an organization’s success, whether it be financial or in provision … really hinges on what our software does. When I say, ‘mission critical,’ it’s critical. Things like up-time, data integrity, efficiency, usability, any sort of adjectives that you want to coin, are so important when Darren makes those decisions.

“So, really, it’s about staying current with technology, but at the same time not getting caught up in it, but to ensure the mission-critical software can not only perform when it’s supposed to, but will remain to do what it’s supposed to for our customers.”

Aggressive, but conservative? These are opposites. How can you be both? Find the middle ground?

“I think that’s ultimately our goal … and we argue a lot,” Fahey said with a chuckle. “One side is calling the other. I’m ultimately a salesperson and pushing the organization into the future, and he’s the person that has to make it work. And he has to deliver. He knows what it can do, and I think I know what we need it to do.

“There’s a balance there, but there’s a constant shifting where I can say, ‘Hey, we need to put all of our systems in the Apple App Store,’ and he’s like, ‘Uh, that’s not going to work.’ So, there’s that back-and-forth that I think we complement each other on very well as we work together.”

Fahey and his HCS team are very committed to the Garden State. “We have a good relationship. It’s obviously a densely populated state. From a healthcare standpoint, there are a lot of hospitals and a lot of healthcare providers, which ultimately lends itself to a lot of opportunity, especially for a healthcare software vendor who sells to those types of entities.

“It’s where we started, and we have a lot of our staff that have been with us for an extended period of time – probably 10 or so individuals who have been with us for over 20 years, if not more for some of them – so our ties and foundations are here.  We do like to have one location for all our developments and marketing and corporate operations.”

HCS hires from local colleges, seeking young recruits who are willing to grow roots in Wall Township. “We have strong relationships with Rowan, Monmouth University and Rutgers, of course, that we leverage to gain exposure. We bring people in at that level and we train them in what we do and how we do it.”

HCS has been around for 49 years, a long time to be in business. This is a credit to both HCS’ leadership and employees. But what does the future look like?

“I see our company continuing to grow,” said Tom. “I see opportunities to advance our customers’ use of information technology, and I think there’s a tremendous opportunity for us as an organization, and we’re really building on our experience as a company. There aren’t many companies that can say they are going on 50 years.”

That’s a legacy that will be difficult to live up to. But Tom said that he believes HCS has laid the foundations in terms of how the organization is structured, how it develops the software and how its handles customer relationships “that have enhanced our ability to stick around for as long as we have.”

Previous: Performance Wearable Startup YOPI Reaches $185K in Crowdfunding
Next: Marketing TECHniques: How to be a Twitter rock star