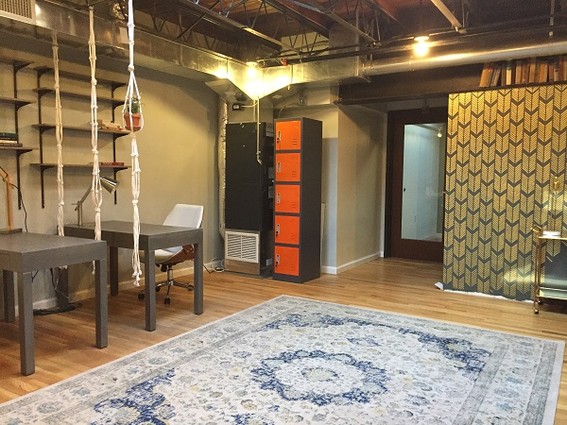 Cowerks, the coworking space in Asbury Park, unveiled its newly renovated premises at a launch event on December 3. Located in the Lakehouse complex, on Lake Avenue, Cowerks has renovated its entire third-floor space, adding dedicated desk rooms and phone rooms similar to the ones found at places like WeWork in New York.

The renovations have also let Cowerks become more easily accessible to other tenants in the building. Now, workers and visitors can more quickly navigate through the Lakehouse complex, enabling Cowerks to appeal to more individuals and businesses who may want to take advantage of a coworking space.

Cowerks was founded by Bret Morgan and Danny Croak. “Community building is something that I’ve always been interested in,” said Morgan. “When I was 21, I threw DIY punk shows in my basement in Montclair. That evolved into owning a 250-person all-ages club that lasted for the next six years.

“Cowerks and Jersey Shore Tech essentially started as a DIY community for local Web designers and developers to collaborate on ideas and projects. Since we started back in 2010, it’s evolved into so much more. We’ve been at the center of an emerging culture around technology, startups and entrepreneurship, and it’s allowed us to be ourselves, take calculated risks and grow as that community has grown.”

Along with the renovation of its Lakehouse site, Cowerks recently launched a larger second location on Main Street in Asbury Park, called “Cowerks at Junction Hall,” with the help of a loan from the New Jersey Economic Development Authority.

The Junction Hall location will be geared toward small to medium-sized businesses, startups and corporate entities that require more than what the Lakehouse site is designed for. While the original location is a practical choice for freelancers, consultants and entrepreneurs, the Junction Hall space will draw larger organizations to the area.

“We want to appeal to those who are commuting from here to New York right now, and [give them] what they need,” said Morford.

As an example, Morford noted that Jersey Shore residents who work for major corporations like Citi have expressed interest in setting up at Cowerks, so that they can be more efficient with their time when it’s not necessary to be in New York.

Monmouth County is increasingly attractive to the New Jersey tech community, with the Vi coworking space recently opening up at the Bell Works campus, in Holmdel, along with the launch of Cowerks’ second location at Junction Hall. It’s more affordable than up north, and the desirable shore lifestyle is helping companies retain their top talent.

For bootstrapped tech startups on a budget, Cowerks and Vi aim to be the best of both worlds — offering the access and resources of places closer to New York, while eliminating the financial, operational and competitive downsides that come with launching and growing a company there. Larger, established tech companies based in the greater New York City area that are seeking sustainable and inclusive alternatives will now be able to retain more of their top talent that’s based in Monmouth County.

As coworking spaces become more popular in central New Jersey, competition will heat up. What if WeWork enters Asbury Park or Red Bank? It’s not a concern, said Morford. “They would be seen as the ‘establishment,’ and unfamiliar to the community, whereas all of us grew up here and know and work with a lot of people in the area.”

Is Cowerks competing with new coworking spaces in the state, like the Vi collaboration hub at Bell Works? They’re not, according to Morford. “What’s good for Vi is good for us and the community,” and that there’s no reason why flexible and mobile companies and freelancers will not work at Vi one day and then at Cowerks the next.

When it comes to the benefits of a change of scenery for employees, he added, a successful coworking space “is not an office,” but a place to inspire, mentor, learn and collaborate. “Cowerks is a blank canvas,” he said.

Junction Hall’s business development model will take a page out of the WeWork playbook: WeWork recently struck a deal with Microsoft to have 30 percent of Microsoft’s New York employees work out of WeWork locations throughout the five boroughs. Cowerks at Junction Hall aims to establish similar partnerships throughout Monmouth County.

It makes sense that, alongside Asbury Park, the other Brooklyn-esque city of Red Bank will become an important place for New Jersey startups, according to local entrepreneur TJ Pingitore. Will Cowerks establish a third “Tri-City” location in Red Bank?

“There’s nothing in the works,” said Morford. But he acknowledged that there have been conversations about it, and that Cowerks regards Red Bank as a key to its ecosystem. “We can see it happening,” he said.

Previous: At the Innovate JC Sustainability Hackathon, Enthusiastic Teams Create Solutions
Next: Technology Marketing in the Digital Age: How to Improve Traffic and Engagement on Your Social Media Platforms in 2017 (Part 2)