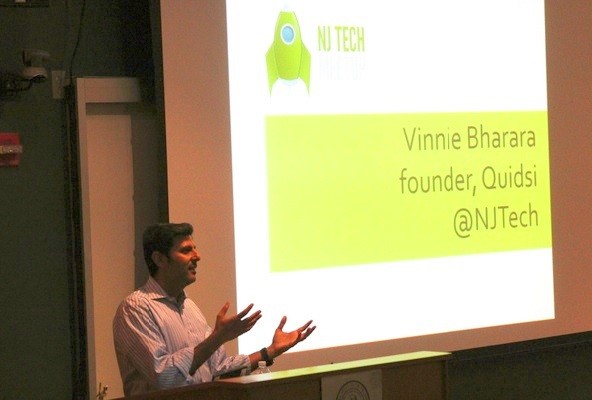 In the annals of New Jersey entrepreneurship, there’s a funny chapter about two men, Vinit Bharara and Marc Lore, who crisscrossed the state, cleaning out every Costco and BJ’s Wholesale Club of diapers.

No doubt other customers and the cashiers wondered about the men who were buying thousands of dollars worth of Pampers and Huggies.

Bharara and Lore were on a mission. They had started an online store, diapers.com, and were shipping the product to parents all over the country. The company became so successful that the two soon made more than enough money to look back at those awkward shopping trips and laugh.

At NJ Tech Meetup’s 44th monthly gathering Jan. 9, 2014, at Stevens Institute of Technology (Hoboken), Bharara spoke about starting diapers.com and the umbrella company Quidsi, and what he had learned from the experience. A New Jersey native, he said he was happy to talk shop with other Garden State entrepreneurs.

In 2005 Bharara and Lore were best friends, successful corporate professionals and married men with small kids. From experience they suspected that other exhausted new parents would relish a service that would send them diapers, sparing them the hassle of going to a store.

In a Montclair office, Bharara and Lore launched their Web business, which promised convenience. Before they had the money to stockpile products, they would fill their customers’ orders by going to a store, buying diapers off the shelf and shipping them quickly.

The process made so many parents happy, Bharara and Lore soon had many customers. They made $2 million in revenue their first year, which grew to $300 million by their fifth year. In 2010 they sold diapers.com and a bundle of similar sites to Amazon for $550 million.

Bharara peppered his talk with anecdotes. When he discussed taking his father on a shopping trip, he imitated the elder Bharara’s thick Indian accent as he described him cross-checking a seven-foot-long receipt. He explained that in the beginning he and Lore had only one employee, a stay-at-home mom who ran the company’s customer service line.

“I remember Gina would tell us how customers would call and say, ‘It’s funny how I keep getting you every time; what are the odds?’ ” Bharara said. “Then customers would ask to speak to a supervisor, and she would say, ‘Certainly,’ put the customer on hold and then come back on with a deeper voice.”

Bharara provided the audience advice, or rather constructive non-advice. “People ask all the time about lessons learned and the advice I would give,” he said. “I’m reminded of the famous screenwriter William Goldman, who said, ‘Nobody knows anything.’ People are going to tell you the formulas or the magic bullets. That’s not to say there isn’t great advice — there is, but it should tell you something that much of that great advice conflicts [with other great advice].”

Bharara cited Steve Jobs and Michael Eisner (Bharara’s boss when he was a lawyer with The Topps Company) as examples of business leaders whose management styles conflict with the way executives are advised to lead. Each has a reputation for micromanaging, an approach that others have argued against.

In another example, Bharara referred to disagreement on whether marketing is important for startups (Bharara said it is) and on whether customers or employees should come first (he said he has always thought customers should).

“My bottom line is that you’re going to get lots of advice from lots of people,” Bharara said. “In the end, it’s more information than anything else. It’s stuff you have to think about and play around with to fit your circumstances.”

Bharara encouraged the entrepreneurs to experiment. He said he and Lore had, for example, tried to offer many shopping and shipping deals to attract customers, and had reorganized their company’s structure several times to ensure it was operating at maximum efficiency.

Bharara did not leave the meetup audience in an existential funk. “While nobody knows anything, you know the most,” he said. “It’s only you and your people who know the pesky details, the special variables. No one else, like a venture capitalist, could possibly have the intimate knowledge that you have.”

That dichotomy of ignorance and knowledge should encourage entrepreneurs to “cross-examine” themselves continually, said Bharara. “I interview myself,” he noted. “I ask my own FAQs. I know the details of what I’m insecure about. Asking yourself those questions is very useful.”

Previous: Broadcasters, Teams Use Technology From NJ Startup LiveU at Super Bowl
Next: When Camden was Silicon Valley–and Glimpses of a Med-tech Turnaround