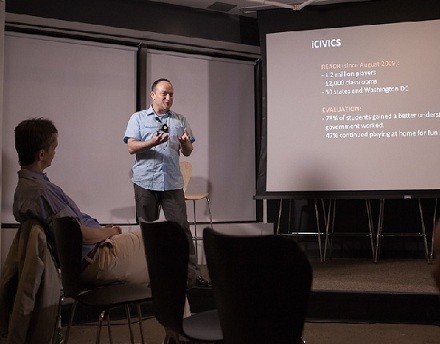 Asi Burak talks about games that change society at TechTalks@Audible in September. | Audible

At the TechTalks@Audible (Newark) event on Sept. 10, 2012, Audible CTO Guy Story introduced a passionate Asi Burak, co-president of Games for Change (New York), which curates and provides a platform for games designed to leverage entertainment and engagement for social good. An interested and engaged audience peppered Burak with questions long after his presentation.

Burak described his childhood in Israel, his stint in the Israeli army and his need to engage in something entertaining afterward, which led him to become involved with mobile games in that country in 2000. He recalled, “We did location-based games, pre-GPS, using three antennae and triangulation.”

Burak then attended Carnegie Mellon (Pittsburgh), where “everything merged for me,” he said. “I had a professor, Randy Pausch,” known for “The Last Lecture” and “the best teacher I ever had, on many levels,” Burak said.

Burak approached Pausch with an idea, telling him, “I did gaming in Israel and I’m still very connected to everything going on there. I want to make a game that Israelis and Palestinians can play, and perhaps [they can] make peace at the end of the game.” Pausch let him go ahead, though he didn’t really believe a group of students could come up with such a thing.

Of course they did. The students were able to start a company based on the game, called PeaceMaker. “Not only was it a successful university project, it went into the real market. It was one of the first-ever serious games, what we now call ‘games for change,’ dealing with the most serious issues of our time,” Burak pointed out.

Players could assume roles from the Israeli or Palestinian perspective and negotiate with leaders, but they had to take into consideration security constraints. In other words, as one commentator said, you were supposed to make peace “in a virtual world of suicide bombings and Israeli military strikes.” The game didn’t try to address all the issues, but it raised some for discussion and exposed players to different points of view.

Lofty ideas and ethical dilemmas are dealt with all the time in books and movies, Burak said, but some people don’t believe games, no matter how well designed, can rise to the level of provoking discussion, as do other, more established media.

Burak disputes this. He says games, with their power of engagement, ability to keep people tuned in for long periods of time and interactive nature — which requires players to make choices — are a perfect medium for this kind of social change.

He added that others agree with him, including former Supreme Court Justice Sandra Day O’Connor, who had begun a site, iCivics.org, that uses educational games to teach civics lessons in the classroom. These kinds of socially oriented games often make it to the New York Times pages, while regular games do not, Burak said.

In 2010 O’Connor spoke at a Games for Change festival, a gathering of the best minds in this area and of players and other interested parties, Burak said. In 2011 Al Gore attended the festival and called games the “new normal.” Burak sees more investment going into the field.

Games for Change is branching out internationally, replicating its model in Brazil and most recently in Australia. And there are more games in this category than ever before. Burak provided many examples in his talk.

Devising tools that are easy for budding developers to use may spur the creation of more games for change, Burak noted. It’s now possible for young people to get involved in creating games without much training. Simple tools for embedding music and animation into games are readily available, and youngsters can make clever games in a day.

This year Scholastic (New York) added video game design to its prestigious Art and Writing Awards contest, Burak said. Previous Scholastic gold key winners include Andy Warhol and Sylvia Plath, among many others, albeit for their art and writing.

“We have an amazing opportunity to change a medium that is becoming dominant in the 21st century,” Burak said. “We have to try,” he concluded.

Previous: New High Tech Dispatch Center Opens in Union
Next: At VANJ Meeting, VC Svrluga Explains What Gets His Wallet out

The CatapultX team is excited to announce we've been named a finalist for "Best Early Stage Tech Company" by Adexchanger. The 2022 AdExchanger Awards winners will be announced on October 17th. https://www.adexchanger.com/go/awards-2022/