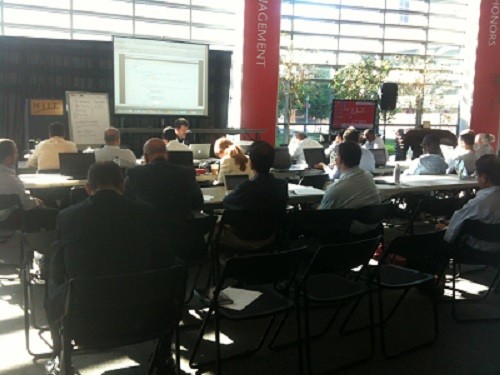 Participants work on a programming exercise at CloudCamp NJIT in June. | Esther Surden

NJTechWeekly.com stopped by CloudCamp Newark, held at NJIT on June 12, 2013, where we heard speakers on an “unpanel” facilitated by Dave Nielsen, cofounder of the CloudCamp (Mountain View, Calif.) organization. The unpanel tackled questions ranging from how small businesses can benefit from the cloud to security issues in the cloud.

Unlike a traditional panel, the unpanel was formed after Nielsen took questions from the audience, listing them on a whiteboard. He then asked audience members if they could answer the queries. Those who said they could were called on to participate in the panel.

According to the organization’s website, CloudCamp is an “unconference” at which attendees can exchange ideas, knowledge and information in a creative, supportive environment, advancing the current state of cloud computing and related technologies. An informal member-supported gathering, the camp relies entirely on volunteers to help arrange meeting content and locations, speakers, equipment and membership recruitment.

CloudCamp Newark was organized by Mohammad Zaman, a director of cloud platform services at VirtuStream (Bethesda, Md.) and an instructor in the CloudMaster program at NJIT, along with others. In addition, Zaman is an organizer of the Cloud Assessment and Road to Cloud meetup.

Answering a question about how small businesses can use the cloud was Matthew Hahn, vice president of network services for Livingston-based SWK Technologies, a Sage software distributor and Microsoft partner. Hahn said in his case cloud software provides small businesses the opportunity to implement a cost-effective system that is scalable and not managed by him. “You never have to invest in the infrastructure that is so difficult and expensive to manage,” he said.

Nielsen noted that though there are many free and inexpensive cloud solutions for new businesses, moving to the cloud can be expensive for an established one. “Why? Because you already exist. It’s expensive to move existing stuff into the cloud,” he said. Nielsen explained that companies using commercial software will need to get new licenses for it. “If you are starting [a small business or a new line of business] from scratch, it’s ridiculously cheap,” he said.

Jimi Mikusi of The Small Biz Cloud Company (Jersey City) addressed the security question. The security issue is partly emotional, he said. Users are wary of the cloud because they don’t know where their data is, but he points out to them that they already trust their email and voicemail to it.

Using as an example a 30-page security document Microsoft puts out for its cloud product, Mikusi asks potential clients, What does your security document look like? Inevitably, small businesses don’t have security documents, he noted, and are lax in other security areas, letting strangers fix their laptops, for example. The large companies offering cloud products are held to very high auditing, accounting and compliance standards, he pointed out.

Krishna Malyala of startup TLCengine (Piscataway) answered a question on how to evaluate a cloud provider. “If you already have a system, you look at providers that match that system. So if you are already on Microsoft technologies, you will probably look at Windows Azure as a provider. However, there are other providers that do the hosting. You have to look at cost. Azure gives you six months free, and a lot of the other cloud providers are also doing that. So the best way to evaluate them is to try them,” he said. You have to evaluate whether the tools the provider offers match your needs in terms of software the cloud supports and scalability, he added.

An “unpanelist” whose name we didn’t hear reviewed open-source options for deploying the cloud. An audience member noted that there are some tools, including Cloud Spectator, to evaluate cloud options. Nielsen said there are tools that try to help users dynamically configure clouds continuously, so they constantly deploy the proper number of servers and don’t leave any on but unused, which would eat up cash.

“This is definitely a needed area,” Nielsen noted. “I’ve heard a lot of stories from people who have left their services on and gotten a really big bill or don’t realize they are using an expensive service when there may be a less costly way to go.”