Home » News » At Inaugural Startup Grind Princeton, Levitan Gets Into the Entrepreneurship Weeds 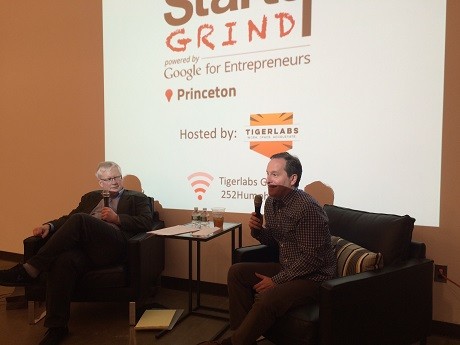 At the Startup Grind Princeton meeting on Jan. 22, serial entrepreneur Robert Levitan sat down with David Stengle, a Princeton-area startup advisor, to discuss the ups, downs and lessons learned during Levitan’s storied career.

About 50 people attended the group’s inaugural event, which took place at Tigerlabs, the coworking space, accelerator and innovation incubator in the heart of Princeton.

Levitan began by discussing his first venture, right out of college, which took advantage of the then-emerging idea of user-generated video content. His business taught people at colleges and universities how to make videos of events during the academic year, and then edited their videos, combining them into a video year book.

He learned a couple of things from this venture, which he exited after 10 years. “One of the mistakes I made was that I didn’t go out and get a good mentor. I just went out and borrowed some money from my dad and some other people.”.

Another lesson learned: Choose the right customers. Educational institutions were the wrong customers. “Every year I was signing up more schools, every year the schools wanted more and more and to pay less and less.”

Levitan landed at AOL very early in his career, and largely by accident. He had never even been “online” by 1995, when he met Candice Carpenter, who had been hired to consult with AOL’s Steve Case and Ted Leonsis.

“We were going to consult on their business model,” Levitan told the group. “The truth is that you have to have an open mind when you are going into industries that are emerging.”

The research that Levitan conducted while at AOL led to the founding of iVillage. Levitan and Carpenter noticed that AOL subscribers spent most of their time online in forums and chat rooms. They weren’t going online to consume media. But in 1995, he said, most industry observers did not yet understand what was going on.

He said that Carpenter and cofounder Nancy Evans asked AOL to fund iVillage to the tune of $1 million, and it did. That was a surprise, as AOL was seeding ventures with $100K and taking 50 percent of equity in those days.

At iVillage, Levitan became an Internet ad guru, if only because the venture couldn’t find anyone from Madison Avenue to help sell advertising for  its site. Levitan talked directly to big brands and wound up selling a half million dollars’ worth of ad space in the first month. When clicks became the only way brands would monetize their ads, iVillage knew how many clicks ads received and priced them accordingly.

Levitan took some time out during his talk to discuss what happens when the bubble pops, how a company can operate in bad times as well as good.

He said he learned a lot from his experience at Pando Networks when the Internet bubble burst and investors lost their patience. The company, which offered technology that made it easy to deliver large media files peer-to-peer, had to cut its staff from 24 to ten people and to focus on one customer segment.

“We realized we had to get cash flow positive again. In order to do that, we had to sign up customers quickly. We started thinking about what kind of customer would sign up and pay us … who the right customers who make decisions quickly are, are ‘all in’ with us and will pay,” he said. Levitan had signed up NBC to use his company’s technology to deliver HDTV shows online, but that turned out to be a business that was too early for both NBC and Pando Networks. NBC wasn’t the right customer.

It turned out that Pando Networks’ best customer was in the emerging gaming industry. A Korean game company needed the peer-to-peer technology to deliver their online games. Their business model required people to complete the download and play the game. “It turns out we got profitable because we focused solely on game delivery.”

Levitan went into some detail about how he was able to sell Pando Networks to Microsoft, pointing out that Microsoft held all the cards and was willing to walk away from the deal at any time. In fact, the first time he tried to sell the company to Microsoft, they did just that. Levitan, who didn’t want to be in the gaming business, decided to go back to the drawing board, build more value into the company and file for patents. Then Microsoft was interested.

He also pointed out that part of his job was to manage the expectations of his employees and investors during the entire “dance.”

Levitan’s company called “Flooz” provided an early form of online currency, and garnered some really bad press when it failed in 2001. The company was used by consumers and businesses for gift giving. For example, Cisco would give its sales people bonuses in Flooz that they could use to buy anything from a number stores connected to its portal.

However, when Cisco hit a slide and took back half of its $8 million order, Levitan had to fire much of his staff. “We lost $4 million in an eight-week span and fired two-thirds of the staff, and I cried when I got in front of the team to tell them this. It wasn’t easy. But it seemed like we survived and stabilized the ship.”

But Levitan’s company couldn’t survive a call from the FBI notifying them that Russian gangs were laundering money through the site. “You know how they ask you for that four-digit security code now. That’s because of us. They didn’t do that before,” he said. Levitan noted that the four-digit security code is not on your credit card statement, a precaution to prevent thieves from stealing the statement and using your account number.

“We closed the business down, and the last day we worked was Sept. 10, 2001,” Levitan said. He added that the events of Sept. 11 helped put his failure in perspective, as it apparently did for the 300,000 creditors who could have filed claims against the company, but didn’t. “We ended up having some trade partners like Barnes & Noble say we owed them money and we paid them.” At that point, “the world had a very different perspective” on what was important.