Home » News » At JuiceTank, Dermer Gives Advice on How Entrepreneurs Can Thrive Under Pressure 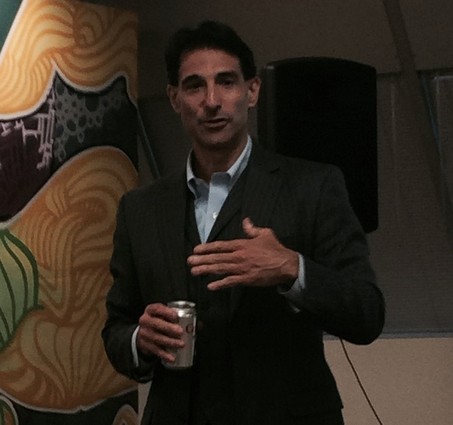 It may be lonely at the top in the corporate world, but it’s nothing compared to the feelings of deep isolation and frustration that often afflict entrepreneurs in their daily struggle to attain success.

That’s one of the messages that entrepreneurial coach and author Michael Dermer shared with his audience at an NJ Entrepreneurs & Technology Startups presentation on July 28th called  “The Lonely Entrepreneur – Thriving Under Pressure,” at JuiceTank, an incubator and innovation lab in Somerset.

Dermer, who left a lucrative career at a prestigious New York law firm to embark on his own entrepreneurial journey, said that those who decide to build their own business will most likely encounter the four P’s: pressure, passion, pleasure and pain.

The ex-mergers and acquisitions attorney is no stranger to the highs and lows of entrepreneurship. Dermer watched his own company, IncentOne (Lyndhurst), a pioneer in providing rewards and incentives to the healthcare industry, nearly collapse in the early days of the country’s Great Recession, in 2008, forcing a layoff of nearly half of the company’s 400 employees.

But Dermer vowed to avoid spending yet another decade building a failed venture. He worked tirelessly for two years to save the company, often sleeping only a few hours a night. His efforts finally paid off when he sold the company to another health rewards firm in 2013.

After selling IncentOne, Dermer’s next move was to help struggling startups and entrepreneurs, a career path he chose because he felt they required a guiding hand in reaching their goals. “When you become an entrepreneur, someone doesn’t hand you a training manual.”

Dermer said that being an entrepreneur isn’t “a job, but an identity,” comparing it to a role like that of a mother. But unlike for other jobs, there is no formal training for entrepreneurs, leaving many of them unprepared for the challenges that lie ahead.

To help entrepreneurs gain a better understanding of their role, Dermer wrote a book entitled,”The Lonely Entrepreneur: The Difference Between Success and Failure Is Your Perspective

.” The book offers insights into the business and personal issues that often make it difficult for entrepreneurs to make progress. Or, as Dermer puts it in the book’s subtitle: “The difference between success and failure is our perspective.”

Doing Everything Is Not Dedication. It’s Bad Leadership.

One problem that can hurt a startup is when the entrepreneur feels that he or she should handle every aspect of the business. This can stifle a company’s growth. “Doing everything is not dedication. It’s bad leadership,” Dermer said.

Entrepreneurs must also learn not to doubt their abilities after a setback, such as investor rejections and client firings. Derrmer advised entrepreneurs to delay thinking about these setbacks for a few days, until after the initial shock is over, so they can take time to digest what happened and determine if the news was as bad as it sounded.

To illustrate this point, Dermer offered an analogy of a boxer who won a fight, but “got punched in the face for a few hours.” The boxer thought the severe beating meant that it was time to retire from the ring, and made that known, only to recant that statement after fully recovering from his injuries a couple of weeks later. “Don’t evaluate your life in the middle of a fight,” Dermer noted.

Realize You Are Always on Stage

Despite various challenges facing a business, entrepreneurs must remain upbeat and positive in front of customers, employees and other stakeholders. Dermer recalled when a former employee had told him that he and other employees only once questioned Dermer’s ability to lead IncentOne. The single time that employees felt uncertain if the company would survive its financial woes was a day when they heard Dermer “pound on his desk and throw a ball against the wall” in reaction to lost business.

The lesson Dermer learned from that experience was to keep your temper under control at all times. “You have to realize that you are always on stage.”

Dermer also told the audience that some entrepreneurs don’t understand that communicating with investors is like “literally learning a new language.”  For example, when pitching to potential investors, software providers must avoid superlatives like the word “love” in describing how customers feel about their products.

“People love their dogs. They love their wives. But they don’t love software,” Dermer said.

And when it comes to dealing with prospective customers, Dermer said that entrepreneurs need to find some kind of leverage to win the sale, enabling them to “negotiate from a position of strength.”

Another common problem is that entrepreneurs often deliberately or unintentionally avoid partnerships with larger, established companies to obtain capital, resources or distribution channels. Dermer said entrepreneurs should consider partnering with these companies because they have plenty of cash, but don’t necessarily have the creative ideas that will help grow their businesses. “Don’t think every path to success is to build it from the ground up.”

Prior to Dermer’s presentation, a startup called FastBuy (Warren) made its pitch on how it can help consumers get discounts on product purchases.

Mahesh Varavooru, founder and CEO of FastBuy, came up with the idea after trying to buy a toy for his child on his mobile phone. Varavooru found that buying the toy was too lengthy a process, and that he had no choice but to pay the full retail price.

Founded in 2015, FastBuy hopes to officially launch its app within the next couple of months. The app allows you to negotiate prices on online retail sites like Amazon, eBay, Walmart, Target and other big brands. In the meantime, users are encouraged to download the app while it’s in the beta-test mode.

Once the FastBuy app is downloaded, users can enter their billing and shipping information on their mobile phones and click on any e-commerce site to make a purchase. The app allows users to name their price for an item by hitting a bid button. It currently works only on iPhones.

If the bid is accepted, the order is automatically shipped. But if the bid is rejected, users will be allowed to bid a higher price that will hopefully be accepted. The company suggests that users bid a price that’s discounted by 5 percent to 10 percent to maximize their chances of getting their bids accepted.

Previous: NJ TECH CORNER: Commvault Systems, Inc.
Next: Social Media Before, During and After an Event Was the Topic of a NJ Strategic Design + Tech Meetup

NJ Governor Requests Expertise of 6 People Who Still Know COBOL https://buff.ly/2V2I3TS Sign up here if you can help https://buff.ly/2WAATZB We've already had more than 6 people respond once http://njtechweekly.com put the word out.