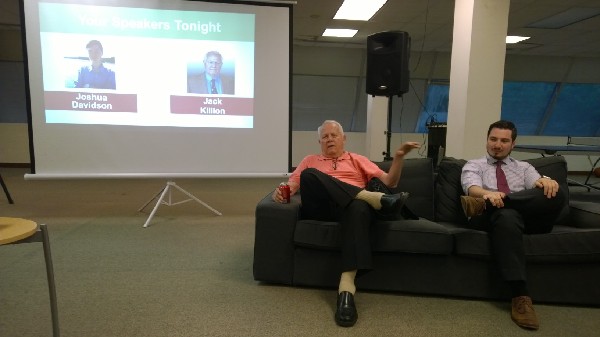 Although they discussed a variety of topics, this article will focus on their advice for creating a healthy company culture, building relationships, and maintaining healthy habits — all of which they said were important for financial success.

Davidson is the 22-year-old founder, CEO, and sole equity holder of Chop Dawg (Egg Harbor Township), a full-service company that provides web design, development, marketing strategies and more to clients. Davidson started Chop Dawg in 2009. He now has over a dozen employees, 695,000 Twitter followers, and a portfolio of work to show for over 125 companies.

Killion, whose advice NJTechWeekly.com recently featured in another article, is a serial entrepreneur with over 35 years of experience. He currently runs the networking consulting firm Bluestone + Killion and the investment platform Eagle Rock Diversified Fund.

Davidson and Killion answered audience questions from a comfortable couch at the front of the room. Because of their different levels of experience, the discussion was titled “Making It & Made It — Both Sides Of The Entrepreneurship Table.”

Here are six key pieces of advice that the two offered to the audience:

Killion said that every employee at an organization is important. To illustrate this point, he told the audience about a time when he was acting as a consultant for a large law firm.

He scheduled a meeting with one of the firm’s partners. “I go into the company and the receptionist is awesome,” he explained. “She’s just awesome. And the [partner] was a big shot keeping me waiting, right?” Killion spoke to the receptionist and learned that she lived in the Poconos, had been with the company for eight years, and took a 5:00 a.m. bus to work every morning.

Killion also learned that she and her husband enjoyed listening to music. He recommended a jazz club called “Deer Head Inn,” and asked for the receptionist’s card so that he and his wife could stay in touch with the couple. However, she didn’t have a card to give him.

When Killion finally spoke to the partner, “I said to him, ‘Your receptionist is awesome, but I didn’t get her name. What’s her name?’” The partner’s response was “I don’t know.” The man also didn’t know how long she had been with the company and assumed that she lived in New York City.

Killion pointed to the partner’s attitude as a factor in the firm’s problems, explaining that the receptionist interacted with many potential clients on her bus commute. He said that “eight years, round trip, say 250 times a year, that’s 500 trips a year, times eight. What’s that? Four thousand occasions to sit next to somebody on the bus and talk about the company she’s with? And to hand somebody a business card that says ‘We can help you with your legal problems. Call us.’”

Davidson said he believed that every team member must be exceptional. “A-plus players attract A-plus players,” he explained. “And the second you bring in someone who’s subpar, that’s the culture you set.” He also told the audience that every employee at Chop Dawg must be able to represent the company and interface with customers.

2.     Show interest in people by remembering their personal details.

“Every meeting I have with someone, I write down notes,” Davidson said. “So like, they bring up who their kids were, where they live, their story, their background, what they do. And whenever I know I’m going to meet that person I remind myself of all the details.”

He explained that this works because “if someone cares about you and pays attention, you automatically like them.” Davidson recommended using a service like Evernote for this purpose.

3.     Long-term communication with investors can be more persuasive than a sales pitch.

He told the audience, “I started six or seven months ahead of when I thought the company would really need money, just talking to people. And I told them ‘this is what we’re trying to do. God only knows if it’s going to be successful. But what I’d like to do is keep you up to date every month or every six weeks with an email update.” By the time he was ready to raise money, “everybody was totally comfortable with me, with the founder, with the concept, with our transparency,” and the company had very little trouble raising money, he said.

4.     Business leaders need “mental partners” within their company for support.

“I would never seriously get involved in a company where there was really only one person driving the company,” Killion told the audience. He noted that Davidson may be the only equity holder at Chop Dawg, “but it’s pretty clear he’s got a team of partners with him. So ‘partners’ doesn’t have to mean equity holders, but they’ve got to be mental partners. Because when things get tough you need people to talk to, and when things are going great you need somebody to pat you on the back and pump you up and share your excitement.”

Davidson said that, along with other methods, he builds a team-oriented culture at Chop Dawg by using a profit-sharing model. “I’m a big believer [that] we only grow as a team,” he explained.

Davidson explained that during his entrepreneurial endeavors “I actually gained a lot of weight because at the time I didn’t realize how important health was, and completely neglected it. It was terrible.”

He said he now tracks his nutrition and calories, monitors his sleep and goes to the gym six days a week. Davidson called it a “huge relief to be more productive, more energy-efficient.” And he added, “I really pay attention to that stuff. And then what it allows me to do is then be more personable, have more energy, be able to do more things in a day.”

6.     A rewarding personal life is important for career success.

“I don’t think you can be successful as an entrepreneur unless you have the right culture at home,” Killion said. For him, this involves maintaining a close relationship with his wife, Judy, and his son, Jonathan.

“I’ve always tried to involve both Jonathan and Judy in what I’m doing,” said Killion, who has daily networking meetings at breakfast. He said he often asks his wife to go with him to these meetings.

He also said, “I used to take [Jonathan] to work in a basket and put him on my desk … and I’d be feeding him with a bottle.” Because of these efforts, he said, there “hasn’t really been a separation” between his work and personal life.

Davidson said that he found his relationship with his girlfriend rewarding. He explained that this was partly because she understands that entrepreneurship is a part of him, and because she is also “very entrepreneurial-minded, which I think is a benefit. She goes through the same things with her own business, and the same growing problems.”

“She kind of pushes me,” he added. “I kind of push her, and we figure out similar situations … so part of it’s also like a bonding experience, and it’s like someone intimate to actually share with.”

The June 30 event was held as part of the NJ Entrepreneurs & Technology Startups Meetup, which is organized by JuiceTank co-founder Charlie Patel and Community Manager Mason Carter.