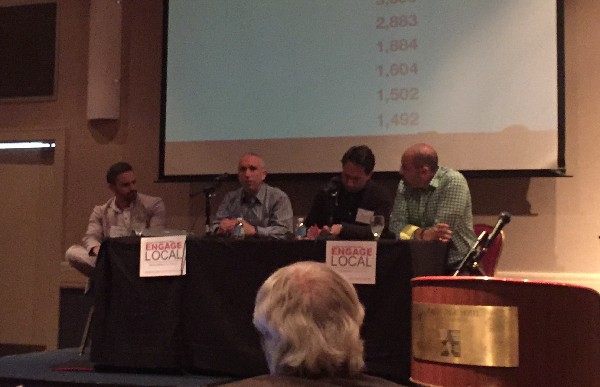 It is increasingly apparent that the most important platform in the media space is the smartphone. No matter where you are, your smartphone is always with you, receiving and recording information wherever there’s a data connection.

Yet entrepreneurs still consider the mobile landscape to be in its infancy, especially when it comes to appealing to local audiences. This view was apparent at the Engage Local conference in Newark on June 15-16.

The two-day event, hosted by the Center for Cooperative Media at Montclair State University, brought together major figures in local media for panel discussions about the future of hyper-local journalism.

The panelists agreed that part of the smartphone’s appeal is its ability to reach one’s audience directly. Phones carry a number of apps and services — email, SMS, social media and push notifications — that can draw a user’s attention. Despite the fact that these services occupy the same platform, they each attract a certain level of engagement.

Haeg said that the most engaging is SMS, though it’s also the most “boring.” SMS has the lowest barrier to entry for messaging because all mobile phones around the world have this capability, whatever the carrier, model or generation.

According to Haeg, smartphone penetration in the U.S. is between 60-70 percent, and growing. “[Groundsource] sends text messages maybe once or twice a week with prompts asking for stories from the community, and we found we get a 30-40 percent response rate,” he said.

Barnett agreed that SMS is “the most amazing, the most positive, effective way to reach people.” Even social media platforms, which he said has an engagement rate below 5 percent, do not come close to the engagement seen with SMS that has an engagement rate of ‘well over 90 percent. “Generally speaking, your most loyal customers will opt into text messaging.”

Haeg cautioned that sending irrelevant messages or too many messages will annoy the recipients, causing them to unsubscribe. Barnett called SMS messages “invasive,” but still more effective than social media or email. “There is no one-size-fits-all strategy, and that makes it really challenging for local businesses that want to reach their audience.”

Barnett recommended that businesses devise an “opt-in” strategy that would allow customers to sign up for SMS or emails, or for messaging platforms like Snapchat, which is becoming increasingly popular with millennials. “You have the most direct and most engaged way to reach [your audience] … that’s still more effective than posting to Twitter, Facebook or Google Plus.”

On the subject of app models, Schwartz said that Lin Mobile’s technology uses apps and alerts for messaging. For instance, his company’s clientele includes local news affiliates that send out traffic, weather and sports announcements via push notifications. And apps are an attractive medium for companies because they offer  information about customers that SMS and email do not provide.

“You get that unique identifier. That’s your cookie. You’re able to pinpoint that user and see where that device is,” Schwartz said. Apps also have access to more extensive data about the usage patterns of each customer.

Barnett said that studies measuring app engagement have shown that usage falls off dramatically about a week after the user downloads an app. “That’s something to keep in mind. Having them find the app is one thing, but keeping them engaged is another. That’s the hard part. We’re seeing really well-funded companies, really well-backed companies, that are still seeing engagement numbers of 5 percent and under per month.”

Luckily, Barnett said, local businesses and publishers have an advantage over larger, more global businesses, as they only need to attract an audience in the thousands, rather than in the millions.