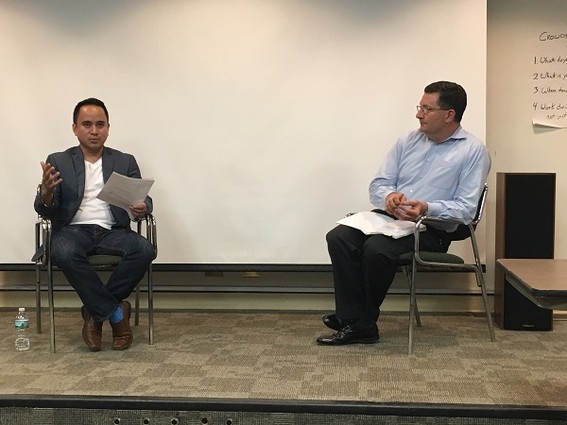 At a Launch NJ event on crowdfunding on May 31, Jason Vitug, CEO and founder of Phroogal (Elizabeth), and Richard J. Colosimo, attorney at OlenderFeldman (Summit), helped the attendees decide if they were good candidates for this fund-raising method.

Colisimo, who has helped several companies raise money via traditional crowdfunding sites, peppered Vitug with questions and provided some insights himself.

Phroogal is a for-profit organization that democratizes financial knowledge by educating a community of 65,000 millennials in financial matters, thus enabling them to reach their personal goals, Vitug said.

He noted that his Indiegogo campaign began with his story, which was entertaining and compelling. “With anything you are trying to build, the story is the most important aspect,” he said. We covered Vitug’s story here.

Vitug recalled that he and his former partner had raised $17,000 in their first week of crowdfunding on Indiegogo, but that was mainly from family and friends. Moreover, they had to pivot in the middle of the campaign because donations were dropping off.

They began offering various perks in an effort to motivate people to donate. “We looked at feedback from people outside of our circle as to what would entice them to donate, and we started creating additional tiers, and that allowed us to expand our circle,” said Vitug

He noted that, because he was basically selling an online service, it was difficult to figure out what awards to give. The founders used Facebook to ask people for suggestions on what prizes to offer and how large a donation to require for them. They eventually created additional bundles that included T-shirts, sunglasses or a Skype call with one of the founders.

“We realized that there are people for whom $20 is their maximum amount,” Vitug said, and a $25 level would push them down to the first $5 level. When the founders understood this, they created an additional $20 tier.

Interestingly, a lot of donors really liked getting a physical prize, so a majority of them clustered at the $50 level because they wanted a T-shirt, he added. “When we realized this, we changed our marketing to focus in more on that shirt.”

In response to a question, Vitug noted that they had used mostly free modes of communication to promote the campaign. “We leveraged all the networks we had. We were able to download our LinkedIn connections and send them an email and let them know about the campaign. We used Facebook Messaging — I have a couple of thousand friends and my cofounder had 4,000 friends — and we made sure we touched base with them.”

Vitug said that while this was time-consuming, they found that most of the people they contacted didn’t know they had a project going. Approached by multiple channels, people will finally respond to one of them in a positive way, he noted.

One audience member asked how much they had to spend on prizes and fees out of the amount they raised. “At the end of the day, we raised $78,501. With the fulfillment of the prizes, taxes, shipping and fees [to Indiegogo and PayPal], we got down to between $67,000 and $68,000.”

Colisimo pointed out that people can’t give a gift to a business, so everything Phroogal collected was taxable as revenue, and the same would apply to other startups using this method. However, fulfillment costs can be counted as business expenses.

Vitug told a cautionary tale about a friend of his who raised $600,000 to deliver plants that glow in the dark. But this friend didn’t think about the costs associated with regulatory and fulfillment hurdles. “I think two-thirds of that was eaten up with all the regulations and licensing that they did not account for.”

Two years after the campaign, the plants still hadn’t shipped, said Vitug, but his friend did a great job in communicating to the donors what the problems were, sharing information about the legal issues his company faced. “When you look at the comments, they are fairly positive,” he said.

Vitug already had a good number of users on the Phroogal platform before his campaign even began, and he advised anyone who wants to crowdfund to build a base before they begin crowdfunding. In response to an audience question, he suggested that content marketing was the way to go.

He and his cofounder also shared their stories on Reddit, which he considers an amazing platform for attracting hits to the Phroogal website. “You just have to recognize that the audience can be fickle there.”

The biggest differentiator was email, he said. “Email is still king.” You want to make sure that when you are building your community, you are taking their email addresses, he advised.

Colisimo told the audience about a contract manufacturer he knew who had become involved with a Kickstarter project run by some designers. But there was a serious problem: They had designed an interesting pen, but when they first tried manufactured it, it couldn’t be built. The contract manufacturer tried to redesign it so that it could be manufactured, but the donors were  unhappy about it since it wasn’t what they expected.

The takeaway is: “If you are promising something that you have not yet built, you need a lot of planning beforehand.” It can be surprisingly complicated to build things, or to find someone capable of actually building it, for the price they tell you up front, and to be able to work with them, said Colisimo.