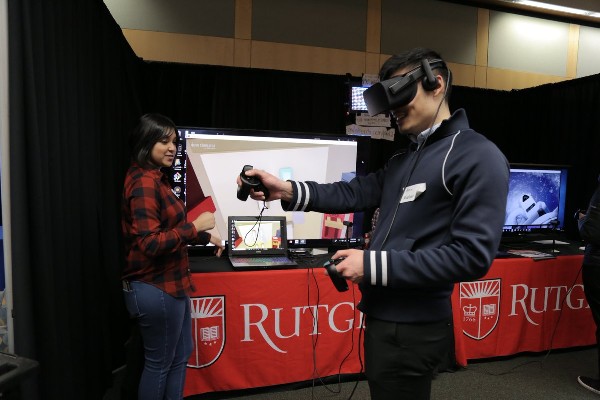 Duping the mind into believing it is somewhere else is a powerful trick. If used for good, immersing patients in highly controlled, repeatable scenarios can be a great asset to medicine. Immersion may help convince patients to use their mental power to begin healing themselves of such conditions as trauma, phobia or phantom limb syndrome.

Virtual Reality (VR) may also further medical education to a near “Star Trek” level, staging immersive scenarios that will allow medical students to learn about anatomy and infection control. A HoloLens, which is a self-contained holographic computer, can replace a cadaver to help students practice operations. But, medical applications will require VR worlds that are fully customized to fit an individual patient’s needs.

The key to creating customizable and totally immersive VR worlds is in the eye of the user, explained Rutgers faculty speaker Patrick Shafto, associate professor of mathematics and computer science, in his talk at the Virtual Reality Showcase, held in the Busch Student Center on February 27. Attendees at the day-long event, which was part of Rutgers Geek Week 2018, enjoyed speeches given by distinguished Rutgers faculty and representatives of the VR industry.

“The original mode of research was to attach a camera to the front of someone’s head, then process the visual experience and make it a VR experience,” Shafto explained. “A pretest determined a user’s standard bias. Then, users were immersed for two hours where they could still do whatever they want. Then, they were shown an isotropic variation of the world. A post-test measured the perceptual change.”

Researching changes in perception is important for understanding how users react to input. “The correct hypothesis is probably that we’re dynamically adapting to input, but the adaptation is relatively short, maybe five to 10 minutes,” Shafto noted.

However, five to 10 minutes might be all that’s necessary to create a totally immersive VR world that’s a tailored fit for a patient in need of cognitive or physical rehabilitation.

“Being immersed in VR, areas of the brain linked to pain become less active. If you’re able to influence areas of the brain that experience pain, you help patients tolerate them better,” said faculty speaker Paul Weber, associate dean for continuing medical education. Weber’s talk assessed the current and future applications of VR in the medical field.

“VR can be used in treating phantom limb syndrome through a process called ‘virtual mirror therapy.’ Patients wear a VR headset and are able to control a virtual version of their absent limb. It grants them a small amount of peace. Any time you alleviate pain from someone, you can help their mental well-being,” Weber explained.

VR is capable of curing phobias through graded exposure, “a step-wise approach conducted in VR that helps a patient overcome his or her fear by gradually introducing the situation to the patient. If you are afraid of heights, we begin with you on the ground floor of a building. Then you go up a flight of stairs, and so on, until you reach the top,” he said.

VR can help veterans with post-traumatic stress disorder (PTSD) feel better, as well. “They become more comfortable in VR sometimes than they do with their therapists,” said Weber. The reason could be that they can immerse themselves in wherever they want to be, and find a happy place, if you will.

Sometimes we aren’t aware that we perceive the world differently from others, or that we’re in a mental battle that we must perceive differently in order to better understand and then overcome. Misconceptions can be as unhealthy as poor eating habits or disease.

“Despite technologies, human interaction is at the core of medicine. Build and maintain relationships with patients,” Weber advised. Weber agreed with Shafto that, used purely as a tool, VR could bridge different forms of perception.

Weber sees VR playing a big role in keeping patients involved in their treatment processes, and in customizing information distribution for patients and medical professionals alike.

Attendees at the Virtual Reality Showcase were also able to take part in interactive VR and augmented-reality demos, and they could watch 3D-printing demos conducted by fellow sponsor Rutgers Makerspace.