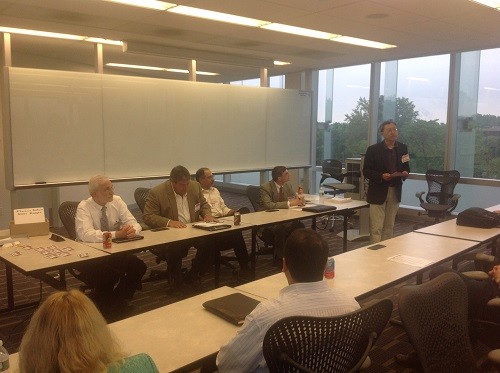 Attendees at Launch NJ Life Sciences Hub’s second gathering agreed that the group was off to a great start. The meetup brought together a panel of four entrepreneurs that have made the transition from big pharma to the pharma startup world.

The meeting, which took place June 9, 2014, at Kean University (Union), addressed the change in mindset that occurs when you leave a big company to begin a startup.

The panel was moderated by meetup organizer Sam Kongsamut, who announced that he had just accepted a [virtual] position. Kongsamut is to become executive director of Neurotrope BioScience (Plantation, Fla.), a publicly traded company collaborating on novel diagnostic and therapeutic technologies in both preclinical and clinical models of Alzheimer’s disease.

The following speakers were on the panel:

The panel discussion provided a real-world look at the realities of being a life-sciences startup. The companies are typically extremely high-tech startups that, according to Stern, “you can’t start [by] working out of your garage … we are about science … and leading the science …”.

The problems these startups tackle typically take several years and several million dollars to solve, which, according to Tarachandani, has a “fun aspect but at the same time is terrifying.” Before launching his company, Tarachandani actually tried out bungee jumping to see if he had the courage to “take the leap,” figuratively and literally.

For Miller, the biggest adjustment was the compressed time frame. While in big pharma you might have years to launch a product, for startups the event horizon can shift to whether you will “still exist six months from now,” he said.

For Shangold and the other panelists, making a life-sciences startup work is about finding the right people. Shangold impressed upon the audience that it is “important that you don’t fill boxes; hire people when you need them and not before.” He added that in the startup world you want to hire employees with a “high tolerance for ambiguity.”

Not ambiguous among the panel members was their passion for the ventures they are undertaking. Moreover, all believe the science they are pursuing is worth the personal risk entailed in leaving big pharma to chart their own course.

Three of the four panelists have used their own capital — often supplemented by a severance package — to start their ventures, and one has joined an already funded venture.

When the panel members were asked about the need for an MBA among those in leadership positions and how they will know when their company has outgrown them, Tarachandani answered the latter question for the group. They would make the transition when “it is no longer fun,” he said.

It was clear, however, that despite the risks, all the panelists are enjoying the startup challenge for the time being.