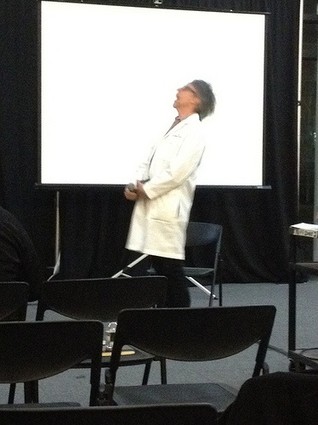 Of course, Audible is in more “privileged circumstances” than most of the people attending Lean Startup Machine Newark, admitted Story. “If we have an idea, we have a business infrastructure set up where we can field it and see what the customer wants us to do.”

“Amazon has a working-backwards approach to things,” Story noted. “So when you have the idea, you are expected to write a press release for it, articulating very clearly what it is you are talking about.” The point is to sell the project.

This isn’t a 10-page document or a bunch of PowerPoint slides, explained Story. It’s a quick summary of what the idea is and why anyone should care. And the idea originator has to figure out whom the product is for: investors, consumers or businesses. This document is accompanied by FAQs and their answers, which anyone reading the release might want to know. FAQ examples include why you are doing the project, what it’s going to cost and how the team will accomplish the task, said Story.

In response to an audience question, Story provided an example of how this approach has been used. In September 2012, the tech team at Audible introduced two new features that use advanced synchronization of Kindles and audiobooks.

One feature, available on Kindle Fire models, is an Audible book component that reads the professionally narrated book aloud while the user silently reads the words on the Kindle book. This helps new readers, people who have to read dense text and others who would benefit from both reading and listening to the audio book. Research suggests that reading while listening helps readers retain material.

Another feature, which Story said he had been thinking about for at least 10 years, synchronizes the books. So if you are listening to an audiobook in the car and want to continue to read the book on the train on your Kindle or vice versa, it will pick up exactly where you left off.

Story had to write the press releases for these features, making the case for the new items and why they mattered. That document went to his boss’s boss. “We had to talk about who was reading and who was listening, we had to decide if people would buy the feature separately and how much it would cost. … We went nowhere until we went through the process,” he said.

At one point, Story’s group gave a demonstration to Jeff Bezos, he said. Of course, when the project was given the go-ahead, it was “10 times harder to implement than we expected it to be,” but it started with that one little statement.

During his fireside chat, moderated by Lean Newark organizer and NJ Economic Development Authority (EDA) senior venture officer Steven Royster, Story told the attendees about Audible’s approach to innovation within the Amazon structure. In a sense, he said, Amazon has a small-company sensibility.

“We are in the middle of tremendous change, and we feel very strongly that unless we innovate we are not going to survive” or grow. … Everyone there feels a sense of urgency that we have to figure out the next big thing, because we don’t want to be vulnerable.”

Rewards for innovation are more symbolic than tangible. Said Story, “If you file for a patent, you get a cool puzzle piece. If you get enough of these, you can build a wall out of them,” a visual symbol of how innovative and cool a tech innovator is.

Noted Story, everyone at Audible wants a lab coat. He has instituted a yearly Innovator Award, for which employees can nominate colleagues with out-of-the-box ideas. Winners get that lab coat, customized.

Royster invited Story to share his past failures with the group, since the Lean mantra is to fail fast and succeed faster — meaning that founders should learn from what failed and either throw the improvement into the next version of the product or pivot.

Story said that when podcasts came out, Audible was deeply afraid. “We thought that all of a sudden the market would get flooded by spoken-word content … and we needed to do something about it.” At the time, Audible had a number of equivalent products, like radio shows and spoken-word magazines that came out periodically.

“We thought we should build our own platform for these, and we thought that because we had a digital-rights management system and could track listeners better,” it would be a better product for podcasters. The company built the Worldcast platform and put it out there thinking users would come, but it was too complicated and listeners were perfectly happy with podcasting. “We shut down the whole thing.”

This is a cautionary tale about not figuring out what customers want, or whether they want the product at all, before the work is done, said Story.

“One super-important thing is to be willing to hear stuff you don’t want to hear. You can convince yourself of anything. You have to find people who are willing to poke holes in your idea … you need a culture that is willing to ask the hard questions,” he concluded.