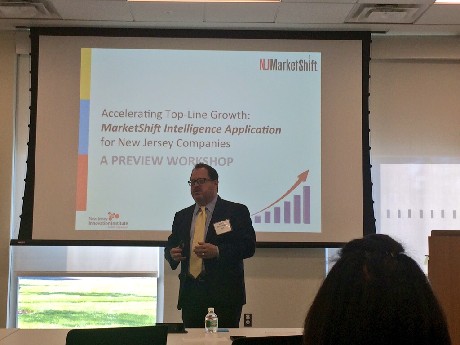 In September, the New Jersey Innovation Institute (NJII) ran a number of NJ MarketShift Design Forums across the state, aimed at the aerospace and defense (A&D) industry in New Jersey.

One of the objects of the meetings was to gain feedback on a web-based data visualization and information software platform being developed by NJII to help the industry uncover opportunities.

The premise behind NJ MarketShift is this: the A&D industry, one of New Jersey’s traditional strengths, has taken a hit in recent years. There were about $1.5 billion fewer contract dollars coming to New Jersey from the Department of Defense (DOD) in 2014 than in 2010, said Timothy V. Franklin, the NJ MarketShift principal investigator.

NJ MarketShift shows contractors that they have assets they can use to leverage and create adjacent markets. It helps companies uncover those assets, shows them how they can turn those assets into something that will fill unmet needs (market opportunities) and then helps them find other New Jersey firms that they can collaborate with to address larger markets, partner with or sell to. Companies are also provided the training and skills they will need to pursue new business.

NJII is partnering with the Fraunhofer organization (Munich, Germany), which has identified ways to explore and mine markets. “The Germans are very good at innovating within mature markets,” said Scott Hutcheson, of  Purdue University, who is assisting NJII in this effort.

At the Sept. 17 design forum, held at metal cutting tools manufacturer Sandvik Coromant (Fair Lawn), representatives from companies in A&D industries acted as a kind of focus group for the MarketShift Intelligence software being designed. Paper “wireframes” for an early prototype of the software were available for the companies to try out, to get the gist of how the software will work.

Meredith Aronson, technical project manager for the MarketShift Intelligence Application, presented the beta version to the group, via a film. When the application is completed, member organizations will be able to access the software through the NJ MarketShift website,  njmarketshift.com.

The application includes company profiles; a way to search for opportunities; and a collaboration network that is described as a place where companies can share activities, benefit from group membership and archive documents. A regional function aggregates information on the companies in New Jersey and provides a general statewide overview. That section is aimed at economic development professionals.

Underlying the application are data compiled from publically available sources (such as DOD contracts), as well as some private databases, such as Dun & Bradstreet’s. Web crawlers are being built to supplement the intelligence in the company profiles. Ultimately, the app will include some user input.

The application’s opportunity panel allows people to enter data and filter down to get specific information on companies. The other aspect of the opportunity panel, which is still in development, involves algorithmically driven matches and assessments of companies.

Bringing visibility to regional economies, workforce systems and markets is a complex undertaking, Hutcheson noted, but they can be made more transparent through data mining.

In a working session during the Sept. 17 design forum, attendees went through a couple of the wireframes for pages of the app, trying to understand how the cloud-based application would work. They gave some feedback, particularly requests that certain bits of additional information be included in the application.

Franklin explained, “We thought, why spend a half million dollars on building a website that is only for policy level people? Why not spend that money on something that can be valuable to the companies as well?”

The software is built on algorithms that will help companies see similarities in their assets and build virtual supply chains, according to Franklin. “This can be a very important economic development platform for the state of New Jersey and for all the companies participating.”

He added that NJII had applied for a grant from the DOD to build company-innovation-mapping software, which would map all of the innovations from New Jersey, including those from the universities, so that there could be an intellectual property (IP) library.

Another aspect of the NJ MarketShift plan is to hold “Agile Design Forums.” These forums help the “loosely connected organizations” such as universities, companies and non-profits and government agencies come together to actually get something done.

In one particular case, these forums have helped Cape May County develop the seeds for an industry focusing on unmanned aircraft, Hutcheson noted. Cape May County has FAA-sanctioned space and lightly used airports. At a meeting of the stakeholders in Cape May, facilitators asked them to “imagine Cape May as a global hub of innovation in unmanned aerial vehicles. What would that look like?”

Over the course of three hours, the group came up with three different scenarios, including one in which “they would have a pipeline of young people skilled to do the work that unmanned aerial vehicles would need.”

Cape May is now planning to launch an unmanned aircraft camp for junior high and high school students. This idea came about from stakeholders in the room: a school superintendent, someone from New Jersey Institute of Technology (NJIT), and the owner of a facility that could house the camp. While there are no best practices for an unmanned aircraft camp, there was also someone in the room who had run STEAM (science, technology, engineering, arts and math) camps.

Additional programming would help the county think about what’s next, perhaps getting community colleges involved in the preparation of avionics technology degree programs or getting companies together to structure a strategic alliance in avionics.

“They are also starting an unmanned aerial vehicle incubator,” said Hutcheson, who added that this would be a whole new kind of incubator, one that would need air space. Spin-offs from such an incubator could create jobs in Cape May County.