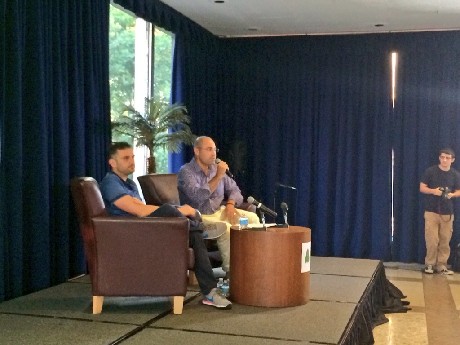 What does Gary Vaynerchuk care about? His family, proving himself as a businessman and someday owning the Jets — although he does admit that his passion to own the Jets could simply be a motivational tool that keeps him going.

Vaynerchuk, a well-known investor, successful entrepreneur, and much-followed social media impresario who settled in New Jersey as a child, sat down for a fireside chat with Aaron Price of NJ Tech Meetup on August 12 and talked about himself, entrepreneurship and how to back the right companies.

Right now Vaynerchuk is the CEO of VaynerMedia (New York, N.Y.), which employs more than 400 people, has raised a $25 million seed-stage venture fund called “Vayner/RSE,” and is raising “north of $150 Million” for another venture fund that will invest in companies that need Series B or Series C rounds. He plans to be very involved in the businesses he invests in at a later stage.

Some of Vaynerchuk’s thoughts:

A video of the complete interview with Gary Vaynerchuk can be found here. [Caution: R rated!]