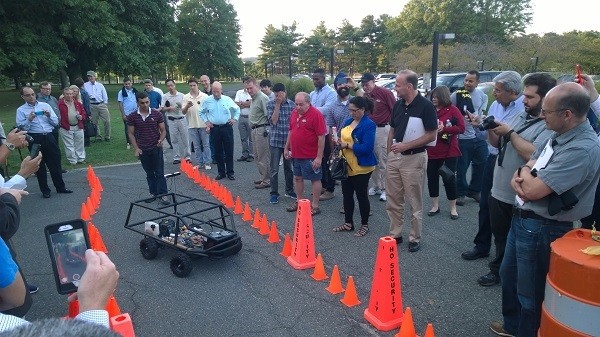 All of DriveAI’s work is open-source, as the group believes that this approach will speed the development of navigation technology and increase public acceptance of driverless vehicles.

The DriveAI team explained its philosophy to an eager crowd during an introductory presentation inside Bell Works’ massive lobby. The attendees then moved outside to see the prototype, which had been developed in just three months.

The prototype ran into cones on its first several navigation attempts, but not because of the navigation technology itself.

“We have a couple different machines working in unison on the car,” he said. One is a computer that plans the navigation route, and the other is a microcontroller that tells the brakes and steering what to do. The navigation computer knew where to go, but the vehicle’s motor vibration unplugged it from the microcontroller.

“So the computer would say, ‘Hey, steer here,'” Vanderstad said. “The microcontroller just didn’t hear it.” But the team was able to work around this problem, and the prototype successfully navigated through the obstacle course twice.

The prototype uses two cameras to develop a three-dimensional visualization of its surroundings. This visualization is then used to develop a navigation grid that, as Vanderstad explained, “has green for where the ground is sufficiently flat, red where the ground is too bumpy, and grey for ‘I don’t know what’s going on over here.’ And what it’s looking for is a good place to steer towards.”

But the prototype is just a small part of the team’s larger goals. Team member Praful Mathur said, “The general problem that we’re trying to solve is ‘How do you let anyone who wants to build an autonomous vehicle interact with our software, interact with our platform, and then actually build it out?'”

He suggested that people could use their open-source technology to build self-driving lawnmowers, snowplows, garbage collectors and more.

The team also hopes to establish a cooperative physical space in which the public could work on self-driving vehicles.

“Essentially, what we want to do is build a common space where people can come and work and interact with the vehicle,” Mathur said. “So we have something that you can see a demo of,  and actually interact with and that we want you guys to come and build with us.”

Team member Parth Mehrotra said the group is motivated by its desire to see open-source driverless vehicles come to fruition.

“We know that unless someone takes the initiative and does it in an open-source way, Google [and other companies] will do it in a proprietary manner, and that’ll be the end of it,” he explained.

Conversely, “If you make this open-source, people get used to it much, much quicker,” Mathur said. He added that the general public will be more likely to trust the technology if they see it being used by people they know personally.

The team could use help in reaching their goals. Shoyoye said that the organization wants the public and lobbyists to appeal to the New Jersey Legislature.

DriveAI has been advocating for the passage of New Jersey Assembly Bill 1326, which would establish a special license for the operation of autonomous vehicles. And while the New Jersey state Senate has approved this bill, Mathur said that it has stalled in the Assembly.

He added, “In November we have to put a lot of positive pressure” on the Assembly in support of the bill, “for this to actually be a reality in New Jersey, rather than just in California, Michigan, Florida, and D.C., and in other countries—all of them doing a really good job. New Jersey could actually take a lead.”

However, “New Jersey’s really, really, really good at shooting itself in the foot continuously,” said Mathur. “We have the smartest people here. They all go to New York to work. We have the most densely populated state, which means that there’s  an incredible amount of talent that you can draw from. You have Rutgers here, you have NJIT and Stevens, and all those schools. And Princeton, right? It’s an Ivy. But even still, New Jersey finds a way to stifle itself.”

New Jersey needs people who will take the financial and legal risk of putting the driverless car ecosystem together, Mathur said. He added  that DriveAI needs corporate mentors to provide financial support and keep the team up-to-date on self-driving vehicle technology.

Finally, the organization could use more volunteers. Shoyoye said, “We definitely need people who have more background in media communications who can handle web programming: front-end Web development and back-end Web development.”

Anyone interested in helping out can contact DriveAI or join their Self Driving Vehicle Meetup group, he said.