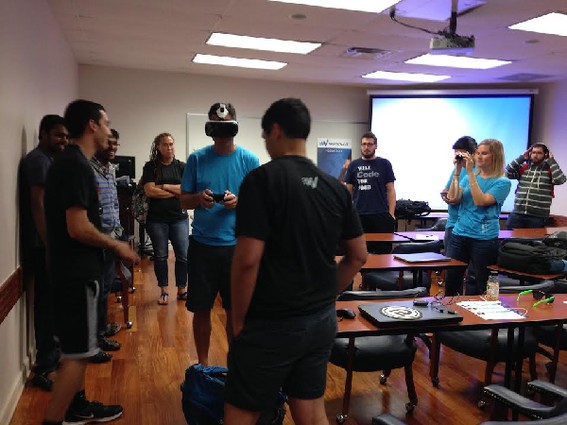 Student developers from around Central New Jersey got together to build apps from scratch to help the visually impaired, hard of hearing or otherwise disabled complete everyday tasks more easily.

The participants were scored based on creativity, level of difficulty, execution and the degree to which the app could benefit those in need. Students scored extra points if their app could be used on a wearable device.

MonmouthCares is the nonprofit care management organization of Monmouth County, helping more than 700 youths and families with complex needs such as emotional/behavioral, mental-health or intellectual/developmental challenges.

Four teams competed in the contest, and on Sunday afternoon the hackathon winners were announced.

Team “Arogya,” which means “whole health” in Hindi, took first place. Vignesh Gowri Manoharan, Rama Krishna Konda and Deepak Raja Muniappan, all from Rutgers University, created an app for the mentally disabled and those on the autistic spectrum. The app, also named “Arogya,” uses emojis to allow users to better express their emotions when they are unable to speak or meet with a psychiatrist.

Once the emoji is selected, the app probes further into the way the user is feeling, through questionnaires and video content. An email is then sent to the user’s therapist with all the information gleaned from this process. As this information is compiled over time, it begins to provide data for such uses as emotion-trend charts.

Team “Stobie” came in second place. Members Imogen Olsen and Michael Terpak created an app called “Straightkey,” which employs SMS technology to assist the visually impaired. Straightkey allows users to send and receive messages via Morse code. When an incoming message is received, the user’s phone uses vibrations to spell out the sender’s name and the message in Morse code. The user can then swipe to replay the message or respond — without having to unlock his or her phone to do so. When responding, the user taps a response in Morse code, and then swipes to send.

The third place winners were  the  “VR Boys,” Joe Barbato and Tyler Roach,  who created the app “VirtuWalk,” which gives individuals who are unable to walk the ability to roam freely through virtual reality. The app uses a Samsung wearable headset that allows a user to become an “avatar,” and walk around, run and jump through virtual environments.

The VR Boys created a practice mode and a free-roam mode. The practice mode helps the user learn how to operate the app and pass through checkpoints before making it outside into the free-roam environment. When in free roam, users can change the environment and music.

Tyler Roach is a freshman software engineering major at Monmouth University, a freelance VR/AR developer and co-organizer of VR Philly.