The state Bureau of Securities issued a cease-and-desist order in September against Celsius, alleging that it had been funding its cryptocurrency-lending operations and proprietary trading at least partly through the sale of unregistered securities, in violation of state securities law, said Acting Attorney General Andrew J. Bruck on Sept. 17, at the time the order was announced.

But Alex Mashinsky, cofounder and CEO of Celsius, denied any wrongdoing during a talk at the Propelify Innovation Festival, in Hoboken on Oct. 6, with CNBC senior reporter Jade Scipioni as moderator.

Mashinsky questioned the allegations and motives of the regulators.

“But they just created a monopoly by buying all of the community banks, all of the trusts, all of the small guys. And then there’s no competition.

“And the fees are more than the interest? And you’re still making a deposit with your next paycheck? You still give it to them. So, we can’t blame them. We have to blame us. It’s an abusive relationship.”

Bruck, in his Sept. 17 statement, said that the alleged unlawful sales had raised at least $14 billion for Celsius, which is facing similar orders in Alabama, Texas and Kentucky.

“Financial companies operating in the cryptocurrency marketplace are on notice,” Bruck said at the time. “If you sell securities in New Jersey, you need to comply with New Jersey’s investor-protection laws. Companies dealing in cryptocurrencies are not immune from oversight.”

Mashinsky responded, “We’ve been following all the laws since 2017. We filed with FinCEN [U.S. Financial Crimes Enforcement Network], we filed with the SEC [U.S. Securities and Exchange Commission]. We do everything you’re supposed to do,” he said.

“The issue is that the banks are whining and crying and complaining,” Mashinsky said.

“The regulators are saying, ‘Let me dig into this and find something these guys have done wrong, so we can shut them down.’ That’s what’s happening.”

Scipioni asked, “So you’re telling me the way it is. But you want more regulation, correct?”

Mashinsky answered, “I don’t want more regulation, I want clarity of regulation. I think all of us are asking. It’s not just me, right?

“How can it be that banks make all-time record profits, and interest rates are zero? These people are stealing from you, taking money out of your pocket.”

Previous: Chieh Huang and Dave Sorin Discuss Pros and Cons of SPACs at Propelify
Next: Mentors Push You, Are Work Therapists, Are Sounding Boards and Much More, Gurevich Tells Jersey Shore Women in Tech

15 More posts in blockchain category
Recommended for you 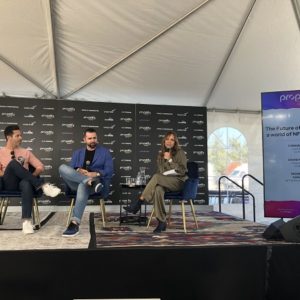