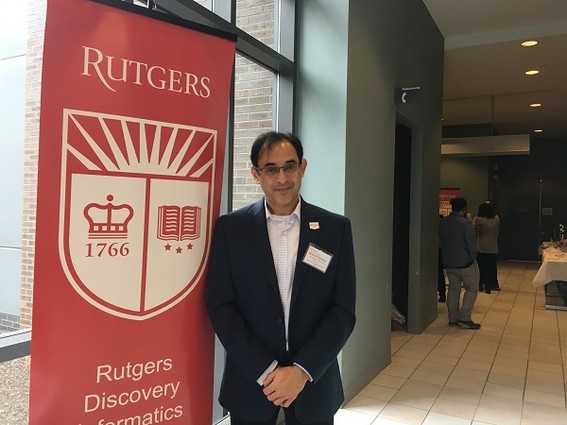 Rutgers Discovery Informatics Institute (RDI2) held a half day of talks this week focusing on applications Rutgers is pursuing that use the computing power of its newest supercomputer, Caliburn.

For example, Caliburn is being utilized as part of a huge data science and ocean observatories initiative sponsored by the National Science Foundation to collect and analyze data from sensors in the ocean.

In a totally different direction, Lindy Ryan, who teaches at Rutgers and Montclair State University, talked about her use of the supercomputer for advanced visual analysis to help combat cyberbullying in New Jersey schools.

Kiran Nagaraja, senior researcher at Ericsson described via Skype how Caliburn is being used in a 5G wireless standard collaboration between Ericson and Rutgers. Others spoke about the use of the Rutgers supercomputer in research on Alzheimer’s and smart cities, among other areas.

In many of these projects, the advanced computer allows scientists to sample and evaluate a greater number of data points, move a volume of data more quickly while avoiding bottlenecks and to visualize things they hadn’t been able to visualize before.

In his introductory remarks, Christopher J. Malloy, senior vice president at Rutgers for research and economic development, noted that Rutgers is providing a systematic way for its own researchers to get access to all of the university’s computing tools, no matter which campus they are located, under the Office of Advanced Resource Computing. “I want everyone to understand that there is a unified way to support specialized research at the university,” he said.

An era of extreme computing

Addressing the group, Manish Parashar, distinguished professor of computer science at Rutgers and founding director of RDI2, noted that RDI2 was started because scientific research had been transformed by the addition of data, and because it was clear that Rutgers needed to embrace this transformation and drive computational-enabled data science.

“We are now in an era of extreme computing. The biggest computer today has over 10 million cores working together to solve problems.” The next generation of machines are called “exascale” computers, and there is a race among China, India, Japan and the U.S. to see who will get there first, he said.

“In this reality, we have to think in a fundamentally new way about how we do science and how we do research.” In particular, it will require people who have degrees in both data analytics and science or social science, or collaborations between people with these backgrounds, to make this research happen.

Caliburn was built to support this research-led model of multidisciplinary science computation. “It can enable the new thinking that is required to address scientific and engineering grand challenges.” RDI2 was established to help bridge the gap between science and computing, so “collectively we can address these big challenges,” he said.

Rutgers has also been pursuing industry partnerships because computing and data are at the heart of many aspects of industry as well, Parashar said. According to Forough Ghahramani, associate director of RDI2, the institute offers opportunities for industry partners to work on-premises with the RDI2 students, research and staff.  The institute’s infrastructure provides partners with access to high-performance computing, tools, and algorithms, as well as opportunities for application-performance optimization and evaluation.

“What RDI2 provides is data science expertise, research in helping all of the industry sectors in identifying what are the best technologies and data science algorithms” to be used in their particular applications, she added.

Asked about the economic impact of the Caliburn computer on New Jersey, Parashar said that there are several aspects to it. One, of course, is the direct impact on the companies using the supercomputer to do their research or to pursue development activities, especially smaller businesses that don’t have such facilities in-house.

An intangible impact will occur when faculty come up with innovative ideas that can be transitioned out of the university, he said. Earlier, Malloy had noted that Rutgers was supporting some 50 startups. Another intangible, Parashar noted, involves students already trained in how to work with big data and computing who can become part of the local workforce.

“That’s going to be the biggest impact in my mind,” he said. “Besides partnerships, we are also building training courses so we can have students going on that have the skill sets that can be readily applied to businesses in New Jersey.”

Caliburn was built with a $10 million award from the state’s Higher Education Equipment Leasing Fund. The lead contractor was High Point Solutions, of Sparta, which was chosen after a competitive bidding process. The system manufacturer and integrator was Super Micro Computer, Inc., of San Jose, California.