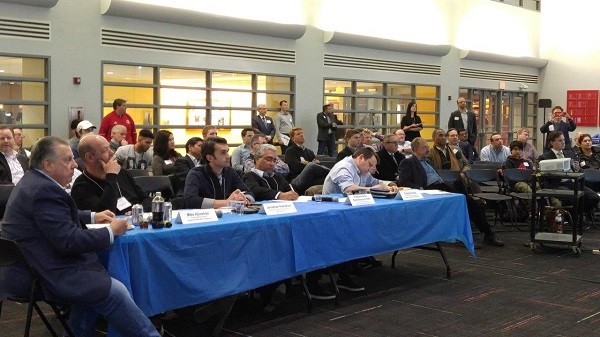 The panel for the second TechLaunch BullPen event | Courtesy TechLaunch

Four companies, one student-led, pitched to a panel of investors and entrepreneurs and an audience made up of  interested members of the tech ecosystem at NJIT (Newark) on March 2.

The pitch competition was part of TechLaunch BullPen, and was described as a “Shark Tank” kind of event for startups. Mario Casabona, TechLaunch founder and CEO, is using pitch competitions to discover “some great companies” for New Jersey angel investors.

The event went as follows: the startups pitched, and then both audience and panel members were allowed to ask questions, make comments or offer constructive criticism.

Only the student-led company, Avollo, was from New Jersey. It was the entry from NJIT, the university where the event was taking place. The winner of the event was Untethered Labs, a startup based in College Park, Maryland, that uses wireless authentication technology to make computer security easier.

Avollo was established in 2016 and is a woman-owned business that provides software and consulting aimed at improving visual-factory-management technology. “When I say improve, I mean that we improve quality, reduce costs, and increase customer satisfaction,” said CEO Michelle Vollo.

The company is trying to solve the pain points in manufacturing like inefficiencies and lost business due to defective parts and waste. Its software helps companies reduce waste, reengineer processes, improve customer satisfaction, reduce risk and improve quality, Vollo said.

Two questions from the audience were who owns the intellectual property and how would the consulting company be able to scale, given that it has to work with manufacturers individually. “What we are going to do is train resellers” in the platform, she answered.

The panelists weighed in on a number of issues, especially the content and quality of the pitch. For example, one suggested that Vollo provide more background on the industry. Another noted that she didn’t talk enough about the size of the opportunity and her addressable market. Finally, there was this comment: “I still really don’t understand what the product does. I don’t fully understand how your product fits into the manufacturing environment. And what kind of manufacturing you are doing.”

Next to pitch was Siddharth Potbhare, cofounder and CEO of wireless startup Untethered Labs.  He said that his company operates in the “intersection of authority, convenience and [the internet of things],” and that its mission is “to make security convenient.”

Untethered is attacking the problem of employees leaving their computers — to talk with a colleague, get a snack, etc. — without thinking about whether their computers are still logged on or not. The reason is that they have to use a password every time to get back in.

This is what distinguishes the company’s product. “Nobody else has it. Everyone else has to rely on the user to lock the computer or have a timer.” But with GateKeeper, the user still has to type in a pin, he noted.

Audience members asked about the patents involved and how users decide when to set the computer to lock. Another audience member asked about revenue. Potbhare answered that startup’s revenue was $100,000 in 2015 and $225,000 in 2016.

The panelists asked questions about how the startup would penetrate the market and whether it would have to send people out to each site to set up the system. Potbhare answered that the startup had partnered with medical equipment sales companies and other distributors. He added, “We typically install the entire enterprise system in 15 minutes, online.”

Joseph Arlia, cofounder of StaffSmart Software Solutions (Garden City, N.Y.), and Ari Starkman, VP of Sales, pitched next. Many companies with unique needs, like caterers, are struggling with staffing, said Starkman, who had been a caterer himself.

“The way they were scheduling staff was very inefficient,” said Arlia. “They didn’t know which staff was going to different events. They didn’t have a precise way to accurately track [staff] time and attendance.”

He added, “We built out a B2B Software-as-a-Service model, along with a companion app” that allows companies to track staff time and attendance much more accurately than with a manual system, while complying with Department of Labor regulations. Arlia and Starkman noted that the software is being integrated into other industry software in the market, and that the company already has paying customers.

Audience members asked about competitors and if the software could be extended to the much larger restaurant market. Starkman said that restaurants tended to be single-location shift-based entities, and that there is more competition in that market.

A few panelists suggested some changes in the presentation, including putting customer validation information up front. One of them noted that the real competition for this product is “the status quo”: Folks don’t want to change the way they do business. He advised the founders to focus more on educating the customer. Another panelist liked the metrics slide. “It’s a great way to show how you differentiate from your competitors.”

HootBoard, a Yardley, Pennsylvania-based company that NJTechWeekly.com has seen before, took the stage next. The company has a virtual “bulletin board” that integrates Web, mobile, screens and email. It’s aimed at large organizations like universities.

Cofounder and CEO Satyajeet Shahade noted that, since the Internet has evolved, there are too many channels of communication for large companies. They can put all of their announcements on the Web, but this assumes that people will visit their websites. They can put out an email blast, hoping people will open their emails, or they can post on social media. Companies also use digital signage, hoping people will see it. “And because none of these work, they are still printing flyers and handing them out,” said Shahade.

“We can be the one place people can go back to and find out what’s happening,” he added. HootBoard is a beautiful bulletin board where users can make changes and post announcements. Moreover, “we can take one message and put it in multiple channels,” he said.

Shahade noted that the company isn’t raising a round right now, but an audience member told him to “never say he isn’t raising money.” In response to another question, Shahade explained how his app puts the right information into the right channels. “Customers are asking us to do two things. One is to segment their populations and [the other is] to segment their content. That is something we are working on,” and are already doing to some extent.

One panelist asked which market segment HootBoard is in, education or real estate, given that the sales cycles are so different. Shahade answered that the company is making this decision right now.