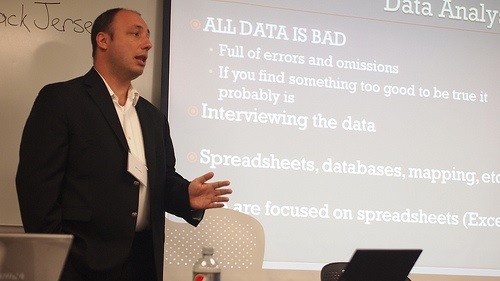 Journalism is becoming increasingly technology-dependent. Half the political stories require spreadsheet skills, and coders and reporters need to learn how to talk to one another.

There was plenty of Excel spreadsheet training and more as Hack Jersey hosted its second hackathon Sept. 21, 2013. On this sunny Saturday, some 40 participants tried to ferret out stories by analyzing campaign finance data. They also sought to build a news app.

The daylong dive into the topic “Law, Money and Politics” drew not only journalists and coders but citizen activists, lawyers and political operatives.

The NJ News Commons, housed on the Montclair State University campus and a supporter of Hack Jersey, has a mission: to foster cooperation among the state’s news organizations. It demonstrated educational cooperation, since this event was hosted on the Newark campus of NJIT.

Juan Silva, who is managing the campaign of Newark candidate Jonathan Seabra, told NJTechWeekly.com he had come to the event to learn best practices for operating within the campaign finance law.

Jessica Glenza, a reporter for the Register Citizen(Torrington, Conn.), had learned of the free event through a Google search.

The participants were divided into two groups. In one room was a data “expedition,” described here, for journalists and others who have little experience with spreadsheets or coding.

In a second room an app to track campaign spending by industry was being built by 15 more experienced data journalists and coders.

Joe Donahue, a Pulitzer-winning Star-Ledger reporter-turned-government official, is now deputy director of the New Jersey Election Law Enforcement Commission (ELEC). He said he sees his job as that of the journalist’s advocate inside the organization, whose goal is to make it easy for reporters to find what they need.

Donahue walked the data “explorers” through the enforcement commission’s website, apologizing throughout for its primitive interface. The government, he noted, is always working with antiquated technology. Some in the department are still using Windows XP, he said. The site has finance data going back to 1999 and lobbying reports from the past four years.

Public contractors are also required to file with the ELEC, Donahue said. Some reports are 1,000 pages long in PDF format, with Excel summary files. These are updated twice a month and are always fodder for stories, he noted.

Donahue said he suspects that if the computer revolution had begun a bit earlier, he would probably have become a programmer. He knows BASIC, Turbo Pascal, a little ColdFusion, Access and FoxPro and has built several desktops.

“I gravitated to this stuff naturally,” Donahue recalled. At the Star-Ledger, he said, “anything with numbers in it they just dumped on my lap.”

Retired state government executive Marc Pfeiffer did a walk-through of the New Jersey Legislature website, which allows lookups of any bill.

Veteran investigative journalist Ben Lesser, now a researcher at the City University of New York journalism program, said the worst mistake a reporter can make is to run with a story based on data without “interviewing” that data.

“All data is bad,” he said, “and full of errors and omissions. If you find something too good to be true, it probably is.”

Lesser lamented the current need for speed. “It’s become much more important to be first than to be right,” he said. “People are tweeting out things before doing the due diligence.”

Hack Jersey is looking for someone to adopt the hack project—building an app to track campaign spending by industry– as an ongoing effort. It is a work in progress at a demo site run by Broadstreet Ads. The code is on GitHub at this location.

“From our perspective, the event was a success,” said Meagher. “As you saw, the data expedition had a great turnout and there seemed to be a real hunger from journalists to start to learn how to understand campaign finance data.

“On the developers’ side,” he added, “it was incredibly ambitious for us to try to take a group of 15 strangers, throw them together and build a full news application in eight hours. We made great progress, and although we weren’t able to finish it in a single day, it was a fantastic start.

“We have 15 people who have now connected with each other and started to dig into this very complicated and somewhat arcane subject. We weren’t able to grow a whole tree in a day, but we did a pretty good job of planting some seeds,” he concluded.