Home » Opinion » At the Intersection of Healthcare and Technology, Artificial Intelligence Rules 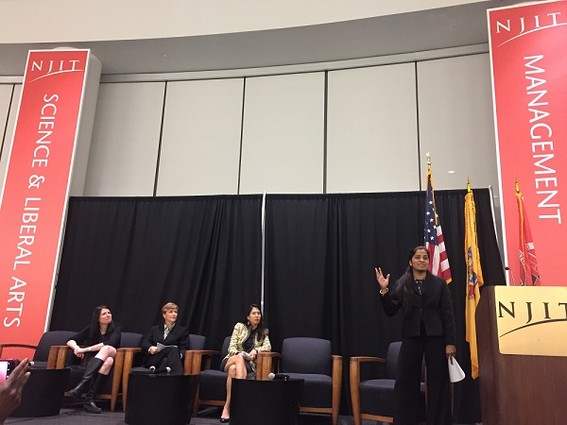 Panelists for the “Intersection of Healthcare and Technology” event at NJIT. | Rob Rinderman

With all the news, and “fake” news, about what did or didn’t happen during the last presidential election campaign in and around the world of social media, and what the Russians did or didn’t do to influence the outcome, anything seems possible these days.

Although neither Putin nor Musk was in attendance at last week’s Women in Tech NJ & NY and NJIT’s Tech Talk, titled “The Intersection of HealthCare and Technology,” there was some scintillating conversation about AI, robotics and big data, among other healthcare-related topics.

In addition to being part of Newark Tech Week, the talk also celebrated Women in Tech Week, so it was indeed fitting that there was an all-female panel made up of respected industry professionals and academics; and the moderator overseeing the festivities was also a woman.

It certainly seems as if AI and machine learning are permeating just about any industry you can think of today, and the evening’s discussion made it clear that healthcare is certainly one of the leading sectors where we’re experiencing innovative disruptions at a very fast pace. And we should expect to see a lot more coming.

Biomedical engineering is an exciting field. Replacement tissues are being developed that can affect how many diseases are treated. The 3D printing of pieces of tissue and even organ replacements promises to revolutionize medicine.

One of the simple, yet key observations of the evening was that, until recently, patient medical records were typically kept on paper and filed away in manila folders tucked away in cabinets in physicians’ offices. “Big data” is still a relatively new concept in the healthcare industry.

Luckily, we have more powerful computers than ever before in human history, and these machines are hard at work crunching analytics 24/7 at lightning speed. Let’s hope that the results will be used for keeping us healthier and for eradicating some diseases.

It was pointed out by one of the panelists that college students and career changers would be wise to consider a degree in, or a pivot to, data science.

With the wealth of data, number crunchers and analysts are definitely in demand. Machine learning is in the process of impacting population health management in the aggregate, care management of specific patients, clinical decision support for physicians and nutrition, to name a few areas being affected, according to the panelists.

Another interesting topic of discussion was wearable technology. Many individuals are now monitoring their own health and well-being by compiling all sorts of metrics about themselves via devices such as Fitbits. Metrics being tallied range from the number of steps taken (which many smartphones are also keeping tabs on) to hours of sleep, heartbeats per minute, etc.

An interesting application for wearables that many of us in the audience were not previously familiar with is a device designed specifically for diabetics. The noninvasive monitor tracks a patient’s vital signs/health metrics and administers insulin precisely when needed ? an application of machine learning.

In addition to wearables, numerous apps are being developed for online medical consultations. Some utilize human interaction with physicians, but others utilize AI.

Among the benefits of virtual medicine are the lightening of appointment schedules for busy doctors (there’s nothing worse than a receptionist telling you that the first available appointment is in three months or that the doctor no longer accepts new patients) and interminable hours spent in waiting rooms (how many old magazines or infomercials can one endure?).

Internet-based services can potentially facilitate 24/7 care for patients in need. Rural patients or those in remote locations are also likely beneficiaries of this brave new world of online treatment.

The use of robotics in medicine was also explored at the event (with an impressive and upbeat presentation featuring an instructive video produced by a patient) by Madeline Corrigan. Dr. Corrigan has been studying Duchenne Muscular Dystrophy (DMD) patients, and she noted that medical devices are helping them live dramatically improved lives by increasing their range of motion. Many of those suffering from DMD are restricted in their range of motion, but robotic machines have made huge changes in their ability to handle a wide array of activities.

It was also mentioned that nanorobots are tiny enough to be swallowed, and can be used to treat wounded areas of the chest, for instance. Another interesting field of robotics is the development of companion robots to care for patients, including the elderly.

Throughout the evening, the audience was not shy about expressing their opinions, including their concerns about the privacy of medical records, given all of the data being collected. For example, could an employer treat you differently if they have access to your medical records, including information on preexisting conditions, which could also impact your ability to receive health insurance? What type of firewalls or security is in place to protect your records? And can doctors share patient records with each other?

One audience member a wondered if the whole healthcare industry is somehow backwards, in the sense that medical professionals should be compensated or at least motivated to keep you healthy, as opposed to treating you when illness strikes, for example.

Lastly, audience members wondered about the best way for medical professionals to engage with their patients. Some preferred in-person meetings with their doctors; others, a phone call. Perhaps, these days, an email or text would be fine for many.

With Congress and the president debating the current state of healthcare in America, including who will pay for what, it is clear that there are lots of questions that need to be answered from a governmental standpoint, and many citizens will likely be impacted by future legislation.

It is good to have events like the Tech Talk about the intersection of healthcare and technology, and we should probably be having more discussions like this on a local, regional and a national basis. Our individual and collective well-being is at stake.