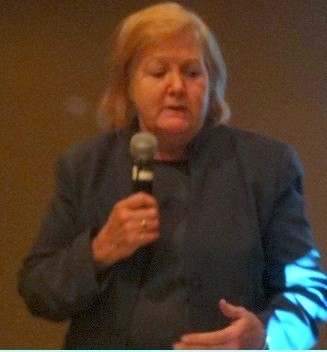 The right angel, someone familiar with the market sector in which the young company operates, can open doors and move a company along, she said.

Jumpstart, a member-led group that invests in high-growth companies in the mid-Atlantic region, is known for its tech investments, among others.

“Some angel groups are kind of fuddy-duddy,” O’Neill said, “but we are on the cutting edge. We look at interesting new ideas. We invested in TechLaunch [the N.J.-backed tech accelerator]. We are investing in crowdfunding platforms. Jumpstart has invested more than $33 million in N.J., and 60 percent of that has been in N.J. companies.”

O’Neill explained what was needed to be considered an angel investor: “You have to pass the SEC [Securities and Exchange Commission] test. You need about $1 million in assets excluding your home. Or you can have an annual income of $200,000. What this really means is that you have to make enough money to enter this risky space and [be able to] afford to lose it.”

The reason many angel groups are regional is that “you have to stay close to your early-stage companies because they require a lot of nurturing,” she noted.

Young companies should be respectful of a potential angel’s time: “People think the big shortage is [in] dollars. It’s not dollars. Everybody is involved in a number of different projects. People have work and families. Angel investing is often not their main activity. If you drag out an idea or are slow doing your due diligence, an angel can quickly lose interest. Be time-efficient and be prepared,” O’Neill advised.

If a company is meeting its goals, she added, Jumpstart will stay with it for the second and possibly third investment round, because it wants the company to succeed. This isn’t the same philosophy as that of other angel groups, she said, who are “one and done.”

Jumpstart likes green and clean energy deals; B2B enterprise software and services; hardware, advanced materials, healthcare diagnostics, IT, communications, high-growth and capital-efficient companies solving pain points, O’Neill said. “We invest a lot in educational software these days,” she added. “We really don’t want to do a direct consumer investment. It takes a lot of money to build a brand.”

Angels usually take 20 percent to 30 percent ownership in a company in exchange for the investment, and “we succeed when you succeed,” she noted. “You have to understand that if you take angel investment, the exit is important. Nobody makes money until the company is sold.” Many startup founders are so in love with their idea that they can’t think about the end, when they will have to sell the company. “Lifestyle businesses, as they are called, are perfectly fine, but don’t take equity investments” if that’s what you want, O’Neill warned.

An important part of the funding ecosystem, angels are almost unique in providing early-stage funds for companies that need up to $3 million, O’Neill said. VCs are completely out of this area: “If they are managing a $200 million or $400 million fund, they are unlikely to be dealing in dribs and drabs of a million dollars or a half million dollars,” she noted. “Recently some VCs put $100,000 into a deal, but that’s just a marker so they can … be in on the next round.”

Many angel groups can’t put together $1 million on their own, so they syndicate the deal with other angel groups. You can see regional and sometimes national syndication, O’Neill said.

Angels can be found through the Angel Capital Association website and other ways, said O’Neill. For example, VANJ, the New Jersey Entrepreneurial Network and the New Jersey Technology Council hold many events for companies and investors.

Many angel groups, including Jumpstart, also hold such events. Jumpstart invites between 10 and 15 potential investees for a drink at a gathering that does not include any pitching.

O’Neill advised that startups go to venues where there are investors. Accelerator demo days attract them, as do networking events like meetups. Talk with those at other startups, asking with whom they had good experiences, she suggested. University IP offices can be helpful: “If you are a graduate of the school, you can sometimes work your way into the transfer office, and sometimes you only have to be local to that university.”

The most important way to meet an angel, O’Neill noted, is through the warm handshake. Accountants, attorneys and business service providers who can personally introduce a startup to an angel are best. “If someone I know sends someone to me, I know they’ve done some of my screening already. I know it won’t be something that doesn’t fit with my expertise or that I won’t like,” she said.

Finally, let everyone know that you are fundraising, O’Neill advised. Have a pitch ready for neighbors and friends of friends. You never know where the money will come from. “The power of serendipity is big in this space,” she concluded.