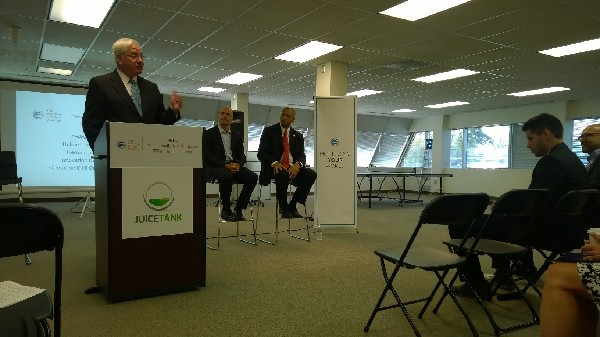 The race is on for the contestants in the AT&T New Jersey Civic App Challenge— a virtual hackathon that rewards participants for designing apps to help veterans and military families in the state.

The hackathon, held in partnership with the New Jersey Technology Council and several other organizations and universities, was officially launched during a press conference at JuiceTank innovation lab (Somerset) on September 16.  Participation is open until November 13 for developers who want a shot at the $13,000 grand prize.

App entries will be judged on their creativity, execution, potential impact on New Jersey and potential benefits for veterans and/or their families.

J. Michael Schweder, president of AT&T Mid-Atlantic States, detailed the contest rules to the press conference attendees. The challenge “will be opened up to individuals and to teams,” he said, and  three winners will be chosen—one from North Jersey, one from Central Jersey, and one from South Jersey. For the purposes of the contest, these regions will be defined by a New Jersey Department of Transportation regional boundary map.

Two of the winners will receive $3,000 each. The grand prize winner will receive $13,000 and guidance from a regional incubator, which is expected to be chosen after the judging. The contest judges, who Schweder said will be announced shortly, are expected to include academics and entrepreneurs.

“We have a very special relationship with the veterans community,” Schweder told NJTechWeekly.com, noting that AT&T recognized the veterans’ contributions, as well as the trauma they have often endured.

Combat veteran and former New Jersey National Guard member Lloyd Deans spoke to the audience about his trauma, and then said, “I don’t know about you guys, but I’m very excited. Not only to make a difference, but really to save lives.”

Deans is a supervising mental health specialist at a Rutgers-based nonprofit organization Vets4Warriors, which provides confidential peer support to military service members. He said that, on average, 22 veterans commit suicide every day. “I’m not saying that technology can solve that,” he insisted, “but what I am saying [is] it can help. It can provide a resource. It can be a tool. It can be something that someone can go to right now and say, ‘You know what? Let me try this.'”

Deans said that simple, accessible and supportive resources can make a big difference for veterans. “A mobile app will have a huge impact on our sector, because the key thing it does is decrease stigma.” He explained that, in the military, “we’re trained to overcome and adapt to anything. But the fact of the matter is we’re human, right? We hurt, we feel pain just like everyone else.”

However, it’s “just a little bit harder for us to ask for help,” he said.

When NJTechWeekly.com asked if Deans had any suggestions for mobile apps, he replied that when veterans “come from the active duty component and they go back to civilian life, they want to make connections with other folks. So I think what an app can offer would be a way to connect with other veterans locally in your neighborhood,” and find out what resources are available. However, he said that there are many potential answers, as technology and users’ demands are always changing.

Jim Barrood, president and CEO of the New Jersey Technology Council, said that the contest would also help the local tech community. “The reason we’re supporting this and partnering is because, at the end of the day, it helps the ecosystem,” he explained. Barrood told NJTechWeekly.com that he felt the contest would encourage young people to pursue coding.

The contest is only open to New Jersey residents and to students currently enrolled at a New Jersey college or university. For teams, at least half of the members must meet the same criteria.

The contest winners will be announced on December 4 at Rowan University.