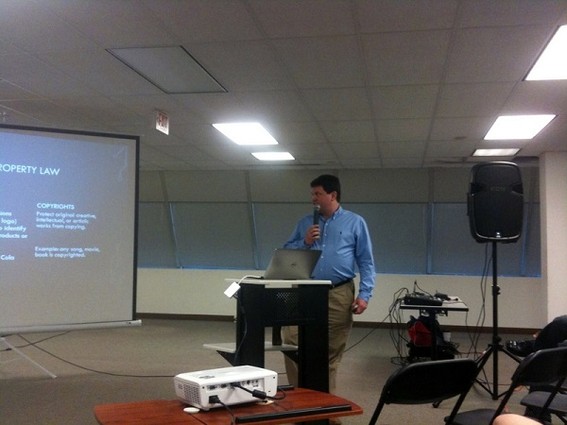 Jon Muskin presented at the May NJETS meetup | Esther Surden

At the May 30, 2013, NJ Entrepreneurs and Technology Startups (NJETS) Meetup at JuiceTank (Somerset), some 88 attendees heard from attorney Jon Muskin, a founding partner of Muskin & Cusick (Philadelphia area) who specializes in patents, trademarks and copyright law.

Muskin, who also is licensed to practice in New Jersey, turned a somewhat dry subject into an entertaining talk as he led the group through the differences between these types of intellectual property.

A patent protects an invention; a trademark protects a word, expression, design or logo; and a copyright protects creative works like songs and novels, Muskin said. A different legal procedure is used to obtain each of these. Patents are the hardest to get, trademarks are a little easier and copyrights are the easiest, he noted.

There are other, less common forms of intellectual property, Muskin said, like trade secrets, which last as long as a company keeps them. “If you leave the formula for your trade secret on a bus, it’s no longer a secret and [is] in the public domain,” he explained.

Companies choose to protect trade secrets because they outlast patents, which have a 20-year lifetime. After 20 years a patent runs out, but a trade secret is a secret indefinitely.

Almost anything can be patented, Muskin said, although the courts are placing restrictions on items like business methods and, most recently, genes. There are three kinds of patents: a utility patent, which is an invention; a design patent, which protects how something looks; and a plant patent.

Muskin shared examples of wacky patents with the audience, including that of a device that holds back dogs’ ears so they don’t get wet when the dog drinks from a bowl.

For a patent to be approved, it has to be novel. It also has to be nonobvious. This is where things get a bit dicey, since what is obvious and what is not is very subjective, Muskin said. Attorneys file patents expecting them to be rejected right away for being obvious. They then have to argue why they feel they aren’t obvious.

While doing patent searches prior to submitting a patent are not required, they are highly recommended so inventors can ensure that nothing else out there is similar to their invention.

Once a patent is filed, inventors can market their inventions, Muskin said. The new law gives patent rights to the first to file, so it’s essential to file patents as soon as the inventor can.

There are a few ways to make money from a patent. The most common is to license it and receive a royalty, but Muskin said that isn’t as easy as it seems because “a lot of companies aren’t eager to take on third-party products.” Another way is to sell the patent, but “of course, no one will buy it unless they really need the patent for their own purposes,” he noted. Finally, he said, the patent holder can wait to see whether others invent something similar and then threaten to sue them unless they license the patent.

A potential obstacle facing patent applicants is United States Patent and Trademark Office (USPTO) staff, a few of whom may be difficult to deal with. There are 6,000 examiners, Muskin said, who are grouped by different subject-oriented “arguments.” He showed the attendees an amusing letter from a fed up attorney. That letter, while expressing frustration, did little to get the patent approved.

Moving on from patents, Muskin discussed trademarks and copyrights. Trademarks represent a product, he explained. “When you see a trademark, you know that it is [for] a specific good,” he said. When you trademark your logo or catchphrase (the sandwich franchise Subway has the word “footlong” trademarked, for example) you obtain a nationwide scope of protection. If you use a trademark continuously for five years, you are basically bulletproof, he said. The USPTO has a database of all trademarks.

Copyrights, the easiest to obtain, cost only $35 and last 70 years after the death of the author, artist or creator.

·       It’s best not to disclose your invention until your patent application is filed. Once you disclose it, the patent office gives you just one year to file a patent. After one year, if you haven’t filed, anyone can profit from your invention.

·       Most patents don’t make money. It takes a lot of hard work and patience to get an invention marketed and sold.

·       Don’t download films illegally. It’s a strictly enforced area of the law and you can be put on lists and ruin your reputation if you do. 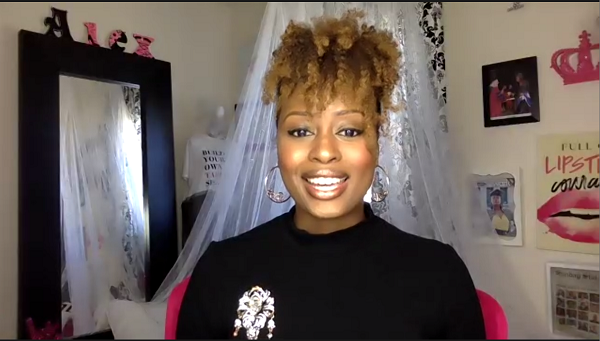 Marc Lore @WeAreTechUnited Propelify. With a $3 billion exit, Lore is one of New Jersey's most successful tech entrepreneurs. Will he build his city of the future here? We can hope.

A new Chapter for Marc Lore? Walmart’s e-commerce chief is leaving to build "a city of the future" https://buff.ly/39zWzKd Can't wait to see what he does next!