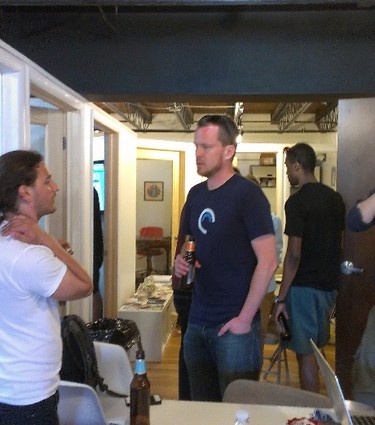 Hackers of all ages converged at the coworking space Cowerks down the Jersey Shore on June 22, 2013. There they were provided an inside window on the coding life at the first Hacking Asbury.

During the one-day hackathon sponsored by iCIMS (Matawan) and Marathon Data Systems (Wall), among others, participants had a chance to listen to talks and code away on their own projects.

The event was held at the 1,600-square-foot space occupied by Cowerks (Asbury Park), which moved to the waterfront Lakehouse building on April 1, 2013. Cowerks is enjoying an uptick in Friday drop-ins as coworkers there discover the joys of beating the traffic by starting their weekends near the beach early, noted cofounder Danny Croak.

At one talk, James Dennis, partner at VC firm Terrapin Bale (New York) and co-organizer of the meetups Hack and Tell (New York) and Dumbo Tech Breakfast (Brooklyn), shared his little-told story of how he got where he is today.

“If you put a flag in the ground, you can start doing something and you will attract people,” he told the 40 or so in attendance at the Lakehouse penthouse. “Just because I was chasing things I just stumbled into opportunities. It’s just hackers being hackers.

“Most of the interesting innovation happens when someone just does it,” Dennis added. “Very rarely is there this eureka moment. You’re just scratching an itch. Build some cool things and follow serendipity. See where it gets you.”

After getting into trouble in high school (he was eventually kicked out), Dennis was grounded just long enough to watch his father work with HTML. He became hooked on coding.

When the dot-com bubble burst, Dennis decided to go back to school to study computer science. He then got a job at Bear Stearns, not buying company stock because he was following his instinct and the advice of Warren Buffett, he said, to invest in only things you understand.

When Bear Stearns went bust, not buying stock in the financial services company turned out to be the best thing Dennis could have done. He moved back east and started Hack and Tell and Dumbo Tech Breakfast. He was in demand.

In 2010 and 2011, to deter recruiters, he’d plant a puzzle in the registration form that was a cinch for a programmer to decode. As for any recruiter who could crack the code, well, more power to him, Dennis said.

Asking questions is what Dennis said got him the VC gig at SoHo-based Terrapin Bale. “For some reason, VCs don’t understand technology in any reasonable way,” he noted, so just because he was able to ask smart questions he was invited to become a venture capitalist.

Previous: Plans Unveiled for Statewide Health Information Network
Next: Forgive Yourselves for Not Being Perfect, Chipps Tells Hacking Asbury Attendees