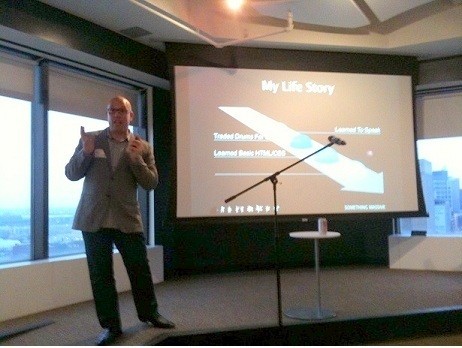 At the most recent Tech Talk networking event at Audible’s (Newark) headquarters, advertising entrepreneur Adam Broitman, chief creative strategist for post-PC-era ad agency Something Massive (Venice, Calif., and New York), extolled the virtues of story selling, the practice of using nontechnical storytelling to “get other people excited about ideas they don’t understand.”

Broitman’s Brooklyn-based ad agency Circ.us was recently acquired by Los Angeles-based Something Massive in a deal whose details haven’t been disclosed.

Broitman is the creative mind behind successful augmented reality (AR) advertising campaigns for a number of products, including Ben & Jerry’s ice cream and the energy drink Red Bull.

Speaking before about 60 tech people on May 14, 2012, Broitman elaborated on his theme, emphasizing that developing technology is one thing but being able to explain it in real language or by example is another.

Before launching into his discussion of how the agency began using AR, Broitman asked for a show of hands indicating who knew what AR actually is. For those who didn’t, he defined it as an overlay of digital information on a live video feed of the real world.

Broitman and a partner started Circ.us, known for its whimsical advertising, in 2008. In the very early stages of setting it up, and even before it was a real company, they became obsessed with the idea of AR, experimenting with it before they had clients.

The two had the idea to create a project that would turn all of New York into an art gallery: the action of pointing a phone at a one-way sign would trigger a piece of art to emerge from the sign.

That project never came to fruition, but shortly thereafter Broitman and his partner were asked by A&E Television to bid on an opportunity to produce an AR project promoting the television show “Criss Angel Mindfreak.”

The agency created an AR game that let users tilt a piece of paper, which moves an orb around on a light path on their computers. To sell the project, the advertisers didn’t use technology-related words.

Instead, while pitching, Broitman told the game’s story by bending a wire hanger into a mazelike shape. On the hanger was a soda can tab. He asked the marketing senior vice president to try out the game by picking up the hanger and moving the tab around the maze. That sold the concept.

“We were able to show the core of the game without talking technology,” Broitman said.

A Ben & Jerry’s ad campaign came next. People who downloaded the brand’s iPhone app could hold their phones over a pint of ice cream and see special scenes. The scenes were “unlocked” by the carton’s lid designs. Only four flavors could be included in this campaign, Broitman said, for technical reasons, “but it was like you were looking into the world of Ben & Jerry’s.”

After that, “everyone wanted AR, and we were getting kind of sick of it,” said Broitman. The agency had moved on and become interested in the “cross section of the physical and digital worlds” concept. A call from Red Bull allowed it to pitch a concept using “the computer as eyes.”

Red Bull wanted to sell more 12-packs. Circ.us came up with the concept to allow users to lay out a track with Red Bull cans. People could use their cellphones to trace the cans’ tops until they captured them all. Once the track was populated, they could race the track on their phones.

The tech behind this simple game is “advanced sensor fusion.” It uses sensors in the phone for pattern recognition — to look for the cans — and accelerometers, gyroscopes and compasses to help follow the track and determine where things are along the route. “We worked with a NASA scientist while figuring out how to make something that looks almost like a racetrack.”

Noting that  story selling had worked in selling this highly technical concept, Broitman said, “We just hooked up a device to a server, my partner walked around a Red Bull-created racetrack and the data populated the screen.” They told Red Bull they were going to take each user’s data and let people make their own racetracks. “We were able to capture their imaginations,” he said.

People, including the track builder and racer community, became very enthusiastic about the concept. Some made up their own games and shared tracks. Now an advanced version of the game is headed to the iPhone app and Android Market stores. “It’s slicker this time. We’ve added artificial intelligence in the game and some redeem codes,” Broitman noted.

Broitman concluded his remarks by discussing his “night job,” the startup TV Dinner — a social second-screen app people can use to talk about TV while watching it. To sell the idea to investors, he said, he uses story selling, explaining that he wants to bring back the experience people used to have when TV wasn’t as fragmented and they could come together in their living rooms to watch and talk about a show.