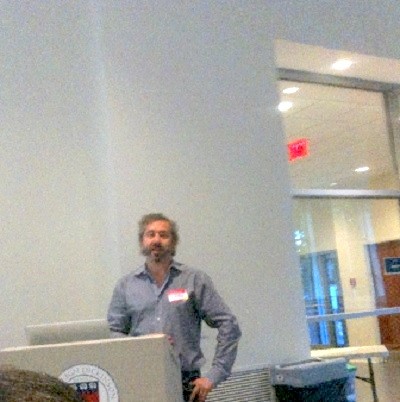 George Abraham of Rhodium Strategies spoke to about 100 people at a joint meeting of the Madison and Chatham Tech Meetups. | Esther Surden

The meeting, which took place in the Fairleigh Dickinson University (Madison) library June 11, 2013, included networking. Attendees heard a presentation given by Hublished (New York and Somerset), the student-founded company with roots at Rutgers (New Brunswick) and NYU whose platform curates webinars and white papers and helps users find them.

After the presentation, NJTechWeekly.com learned that Hublished had raised about $160,000, some of which came from friends and family, for its venture. According to TechCrunch, the remainder came from a number of angels including Lawrence Lenihan, one of the founder’s professors and a managing director at FirstMark Capital (New York).

Abraham had the floor for most of the meeting. His bottom line: emerging tech companies must keep an eye on their exit and prepare themselves for it early on in their life cycle. You have to think about when you are going to sell and what you have to do to prepare for it, he said.

“If you plan for this and execute the plan, you can actually increase the value of the company and the amount of money you can take out of it,” Abraham told the group of about 100 attendees.

Abraham began with the bad news: it is hard to raise VC money right now. In the four quarters prior to his talk, the number of companies receiving venture financing had dropped significantly, he said. The dollar amounts received from VCs is going down substantially, and the number of deals is also declining. If you are not a software company, forget it, he said. Most of the money is going to software.

Even for firms that manage to obtain VC money, the chances of going public are slim. In the first quarter of 2013, only eight venture-backed companies went public, Abraham said.

The alternative, of course, is a strategic sale. It’s hard to get to the point where someone wants to buy your business, he said, so Abraham offered many pointers for those who want to sell their companies eventually.

Two years before you want to sell your business, you should have a roadmap for selling it, he advised. If not, you could run out of money before you sell your company, an all-too-common occurrence, he noted, that can create a number of negative consequences: you could be put at a disadvantage in your negotiations with the buyer, your management team members could get scared and start looking for new jobs if they think you are looking for money, and you may not be able to hire a banker or advisers. Moreover, lawyers, advisers and travel for sales negotiations cost a lot of money, which you have to have available, he said. Talk to your investors and keep track of your burn rates, he suggested.

The worst thing a company that wants to be sold can do is not have relationships in place with potential buyers, Abraham noted. You have to know whom the natural buyers for your firm are and develop proper relationships and partnerships with them. Create a comprehensive list, look at the industries that can benefit from what you bring to the table and build relationships with everyone on that list “because they are not going to buy you unless they know who you are,” he asserted.

Once you have a pre-existing relationship, you have to sell buyers on how your company will make them more valuable, Abraham continued. You have to know them well enough to say this in a way that causes them to believe it. Along the way, make the people you are pitching to your advocates within their own organizations.

Abraham said he had helped sell a social media company to Samsung that couldn’t find its promissory notes and took a lot of time to do so. “We actually had to get some of those notes resigned,” he said. As time ticks on, the buyer becomes less interested in buying, so “you destroy value for yourself if you don’t have those documents in order,” he noted.

There’s a ton of paperwork involved in a sale, and every assertion the selling company makes has to be backed up. “You’ll be surprised at the detail you don’t know,” Abraham said. You’ll need to back up your projections. If you make an assertion to buyers during the sales process, they will call you on it, he added.

Every number and assertion has to be accurate. “They bring in the lawyers and accountants, and the level of detail they want can drive you crazy,” Abraham pointed out. Also, he said, if after the sale they find they are not making the money they had expected, the buyers will look at those documents, find anything that is inaccurate and use it against you in a lawsuit.

After the selling company signs a letter of intent, it will be subject to even more scrutiny, Abraham stated. The buyers may hand you a 10-page request, he said. “They will want every contract you’ve ever signed, every non-disclosure agreement you’ve ever signed, every employment agreement.” You have to be ready to go within a couple of days of signing the letter of intent, he noted.

Many deals have died hours before closing, said Abraham, because of personality clashes between the parties. In addition, small minority shareholders often come out of the woodwork to ask for more money.

Don’t be surprised by the smaller-than-expected amount of cash you are taking home, Abraham said. There is always a “hold back” for as long as two and sometimes three years in case unforeseen liabilities are revealed. Some of the purchase price goes to deferred bonuses. And you will probably be subject to a noncompete agreement and may not be able to work. People often forget how much of the cash does not come to them immediately after a sale, he indicated.

Concluding, Abraham said that if founders are ready for the pain he had described, they can emerge on the other side of a sale having created value during the process and with much more cash than had they had been unprepared.