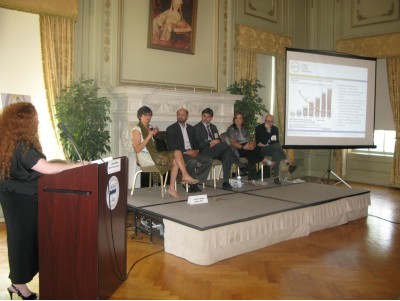 A panel on mobile marketing at the New Jersey Technology Council (NJTC) Mobile Apps Forum and Competition June 20, 2013, concluded that this form of marketing is here to stay, but some of its aspects need to be reformed.

The discussion, which took place at the Fairleigh Dickinson University (Madison) Rothman Institute of Entrepreneurship, was moderated by Ilissa Miller, CEO of iMiller Public Relations (Mamaroneck, N.Y.). The panelists discussed a many topics that addressed the question of whether mobile marketing is obtrusive or beneficial.

They first tackled why companies should pay attention to mobile, citing plenty of statistics about the growing mobile industry and its importance to sales. CJ Millar, senior director of client services at search engine optimization agency Teknicks (Jackson), said people sitting at their computers sometimes choose to use a mobile app on their phone over a Web page because it is more convenient to do so.

Later in the discussion, Atiq Hashmi, founder of Inspirity (Newark), which helps brands build their own mobile sites, said there is no question that the mobile ecosystem is growing. He pointed to Target, which installed free in-store mobile last year. Which sites do most customers visit via their phones when they are at Target? To Target.com, information has indicated, and the retailer has seen an increase in mobile purchases since it enabled wireless.

Mobile marketing “isn’t black magic,” publicist William Lessard, president and creative director of PR with Brains (New York), told the group. “I think about it as a conversation and finding a way to add to the conversation in a meaningful way.”

Lessard added that the “land grab” for apps is over. When they first appeared, everyone wanted to design the next “Angry Birds” or another novelty app. “I think that people are now looking for more significant engagement with their mobile devices. They want their mobile devices … to be an extension of the desktop. They want to be more productive, … to be creative, … to be doing business no matter where they are,” he said.

On the subject of consumer targeting, the panelists seemed to agree that there is too much intrusive following going on. Lubna Dajan, executive producer of pQubd (New York), a mobile imagery conference, said there are many technology challenges to determining how often to retarget and whether the users opening an app in Facebook are the same ones who looked at a product on their mobile phones.

“Also, there is a fine line between targeting and stalking,” she said, noting that she herself had had the experience of looking online for a faucet, then seeing faucets everywhere, on every screen. In addition, advertisers have to determine the duration for which the ad targeting should last, she said. For example, customers looking at pizzerias in New York one week probably don’t want to see an ad for a New York pizzeria the following week, when they are in San Diego.

CJ Millar added that tracking has to become more sophisticated so advertisers know how often an ad is being shown on each device. “How many different devices do you show an ad on before you reach your limit?” she asked.

Another limitation of online advertising is a lack of some customer information. “We don’t know — if someone finds an app in the iTunes Store — if they first found the app on Facebook. We don’t know referral information,” Millar said.

Lessard said, “Ultimately … the only metric that really matters is sales.”

Ensuring your app loads quickly is a basic principle that app developers should follow, Erik Levitt, CEO of Open Data Centers (Piscataway), noted. It should also integrate with the desktop site, he said, adding that if companies are not going to have an app, they need a mobile-friendly site.

Said Millar, “The quality of an app matters. If people stop using an app because they are hard to use, it’s just a total waste of money for the company and the consumer.” Apps need to be an important part of a brand’s presence and identity. Companies have to remember that their apps are less an extension of the desktop and more an extension of” their company’s brand, she concluded.