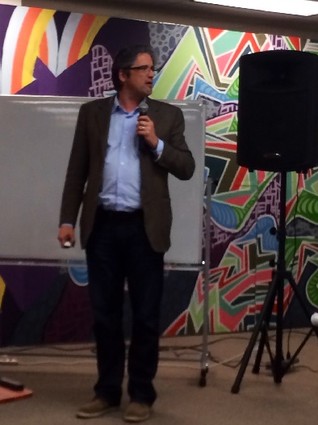 Louis Gagnon talks about the human cost of entrepreneurship at SWNJ. | Esther Surden

Gagnon’s talk was one part practical and two parts cautionary: he told the budding entrepreneurs in poignant terms not to forget that they are more than their businesses and to always make time for the people they love.

Gagnon said his dad, who was very influential in his life, had pointed out to him that cemeteries are full of “irreplaceable” people.

On the topic of how to work in an ongoing concern, Gagnon advised not looking to agile development as the answer in all cases. Agile development can sometimes backfire, and a bad product can affect the sales force and the customers, he noted. “Be careful not to launch minimal viable crap,” he said, just because you want to learn something.

Gagnon has had a varied career, developing a social marketing enterprise in Africa; building machine learning systems for Monster Worldwide (New York) in Canada; and leveraging data, technology and marketing expertise to bring to market a suite of products and services that lets local businesses effectively market themselves for Yodle (New York). Now he is building multi-device delivery systems for Audible and enjoying every minute of it, he said.

Gagnon started off by defining the word entrepreneur. “What I have learned is that being an entrepreneur has nothing to do with being part of a startup or being an owner. [It] means loving two things: loving to build and loving change. If you don’t love those two things, you are probably not going to be an entrepreneur.”

Before you start a business, you have to know why you are doing it, Gagnon said. That’s important because you are not going to have fun at your business every day, and you have to understand why you are in the business. Making money is not a good reason, he said; most startups never make money. This has to be about passion — passion to build something or to change your world, he said.

Building a business is a marathon, he noted, although people will tell you it’s a sprint. Be prepared for a marathon. All the businesses Gagnon has been involved in have taken from five to seven years to come to fruition. “It always takes much longer than you expect,” he said.

Gagnon advised startups to plan for success and to fail early. You can have all the plans you want, he said, but the plan won’t go the way you expect. “As entrepreneurs, we think we have the best idea and that we are the only ones thinking of it. Well, you never are.” Take the time to understand the market and what the rest of the world is doing, and you will save yourself from some tough times, he told the group.

Entrepreneurs should build support, but at the end of the day they should realize they are on their own, Gagnon said. “Being an entrepreneur is about taking risks. You will take on the stress yourself. You will have long evenings wondering if you did the right thing … you’ll have help, and you should build and plan for help, but I don’t think it will take the loneliness away,” he added.

Gagnon had a lot to say about cofounders. The choice of a cofounder is very important, he noted, and it’s important that cofounders understand that it is not about being equal. He told the story of selling his first company and his advisers instructing him not to bring his cofounder to the pivotal meeting because, they told him, he wouldn’t project the image Gagnon wanted. It’s unfair to be the tech person when the CEO is the one taking the $80 million meeting, he noted.

Gagnon reminded the would-be startup founders to treat their first 25 employees well: “Founding employees get the short end of the stick. They sacrifice as much as you do — their weekends, their lives and their opportunities. However, they don’t have the upside of 50 percent ownership of the company … Always remember them,” he advised.

Gagnon was blunt when it came to discussing VCs. VCs will be there to help a company for a while, he said, but they abandon you if they don’t think your startup will work. You can’t take that personally, he said. They have a portfolio of companies and have to put their energy where the money is. That’s just the way the game is played.

Moreover, he said, VCs become less useful when a company is about to scale; that’s because most of them have never operated a company.

Once a company is up and running, don’t sweat over [percent of] ownership, Gagnon advised. Worry more about getting product to market. The percent of ownership doesn’t make that much difference. If you have 40 percent ownership but it takes you four months to get to market and you miss your opportunity, what good does that do you? he asked the group. Maybe giving away a little more to the right people can be a win-win for all parties, he proposed.

Gagnon advised startups to go for minimum viable financing. Too little financing is a disaster, he said, because you spend all your free time trying to chase money. Ask for just enough to prove yourself so you can build a customer base, he suggested. “Then prove yourself,” he said.

Team building is important, said Gagnon. Teams are built on trust. Trust allows conflict to arise among team members, who can then hash it out, put it behind them and go forward. “You can say you’ve fleshed it out, and you can now commit.”

Thinking they can remain CEO forever is a common problem among successful entrepreneurs, Gagnon noted. The function of an ongoing company’s CEO is to build that company, strategize to ensure it is moving in the right direction and obtain the funding and resources to make that happen. “If you do anything other than that as CEO, you are not doing your job,” he said.

You may have to step back from your role, said Gagnon. Some CEOs are great at starting things, but they can’t scale the company. So they pass their companies on to executives who can.

Russ Terry Gives Jersey City Tech Meetup Tips on How to Use LinkedIn to its Fullest Potential https://buff.ly/36ipkeA

We are ONE week away until we kickoff this year's digital Propelify Innovation Festival! Join us for talks, insights, activations, networking, and MORE. Are you registered?! https://propelify.com/

Join us as we help build a #betterfutureforall.