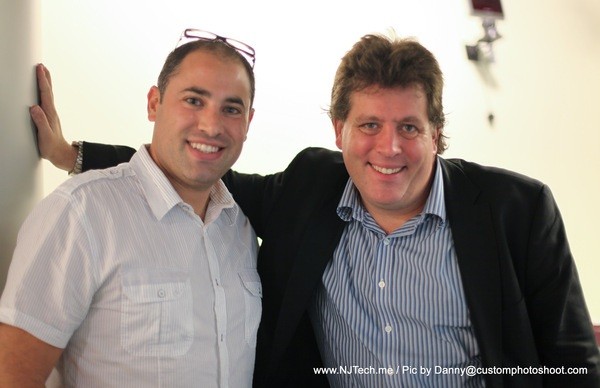 The power of branding was on the mind of Peter Shankman, who wowed the audience at the August 21, 2012, NJ Tech Meetup with stories from the trenches.

Shankman is a hyperkinetic master storyteller, the founding editor of AOL News, founder of the company Help a Reporter Out and an angel investor.

Speaking at the meetup’s monthly gathering, which is always held on the Stevens Institute of Technology Hoboken campus, Shankman regaled entrepreneurs and developers with stories of how he started out in business. He discussed being low on money in 1997 during the frenzy over the movie “Titanic,” creating a T-shirt expressing his disdain for the movie and then forgetting to brand it.

The shirt said “It Sank. Get Over It.” and sold out in half a day after being hawked in Times Square. Shankman hadn’t even thought to create a website to sell it online until a colleague suggested it. When he did get the website up and running, orders spiked, almost overwhelming his Web host. In those early days of e-commerce, Shankman took orders via email, waited for a check, then sent the buyer the T-shirt.

The story had a point. Said Shankman, “If I were to do this today, someone with a cellphone would be in Times Square snapping a picture, and 15 different sites would be selling this T-shirt within a half hour. Now we have to be smart. We have to realize that everything we build has to be 100 percent branded, have our information on it and be hard to copy.”

In November 2010, Shankman competed in the Ironman Triathlon and created a video about the effect training for such a monumental undertaking had on his relationship with a girlfriend. He created the video as a lark — expecting it to be seen by only his friends — didn’t brand it and forgot about it.

Of course, the very funny video went viral, thanks to a tweet about it from Lance Armstrong. “I totally missed my chance to brand it. There is nothing worse than creating something, and nobody knows,” said Shankman.

Prior to Shankman’s talk, three impressive startups presented to the group. Memori.al is a website that tries to outdo Legacy.com which essentially reposts obituaries from newspapers. For a $49 fee, a user can create a beautiful obituary on Memori.al that includes service details and items like maps to the church and cemetery, reception times and other information. Friends and colleagues need not wait for the obituary; it is published right away.

All of the founders of Memori.al are from New Jersey. Cofounder Mike Davis is from Rumson and lived for some time in Hoboken. The other cofounders, John Vitelli and Barry Mazza formerly started a website for Hoboken businesses called Suitematch.com that lets companies rent out their remnant office space to startups. Memori.al is currently offering all NJ Tech enthusiasts 50 percent off its services by going to http://memori.al/c/njtech.

Winning the audience choice award for the evening was General Machines (New York), whose cofounder Kunal Batra (a Marlboro N.J. native who went to NJIT) gave a demo of the company’s latest product, Deaftel Wireless, which is disrupting the current relay method of calling for the deaf.

Silver Living aims to solve the problem of finding senior care for loved ones.  When a senior needs to change living conditions, “You have only about three weeks to do six months of research,”  said Tal Ziv, CEO and cofounder. The site does the work for you, sending its own photographers out to take pictures of senior care facilities, and publishing data about the places.

The startup is also trying to pull together pricing information for assisted-living facilities and nursing homes, which isn’t easy because there is no standardization in pricing and charges are based on various levels of care.

Silver Living makes sense of information available from the state on these facilities. “We also interview residents in the community. In a 20-mile radius around Hoboken there are hundreds of options. Using our tools, you can narrow this down to two or three, visit them and decide which will be best for your loved ones,” said Ziv.