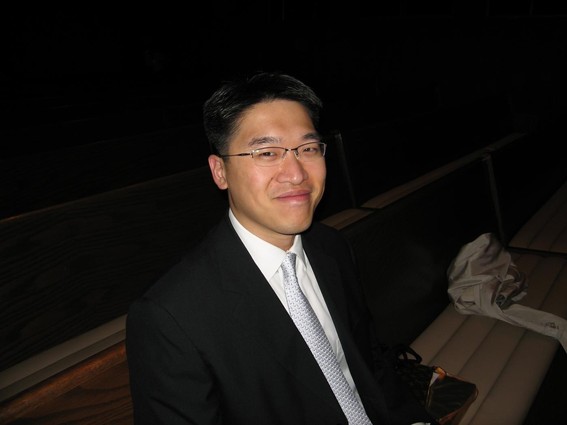 At the May 28, 2013, BrickCity Tech Meetup, some 40 attendees braved a terrible rainstorm in Newark to hear from two startups that are doing good in the world.

The meetup was held at the offices of the Institute for Entrepreneurial Leadership, a coworking space at 550 Broad Street, Newark. The institute runs an annual business plan competition and offers the community coaching, “foodpreneur” advice, CEO small-group networking and other services.

Also featured was Refundo (Elizabeth), a startup trying to make banking less expensive for the so-called underbanked: those who are often ripped off by payday loans and check-cashing businesses.

Olaghere, whose presentation was short, is a serial entrepreneur who had owned BagAWriter, an online freelance marketplace he sold to Scripted.com (San Francisco) in 2010. He is now the owner of GeekCookUSA. In addition, he has just started Geek Supply with cofounder Gary Swaby, who describes himself as a self-published author and writer for The Koalition, a website that delivers original gaming-related content.

Both founders suffer from sickle cell anemia, and Olaghere says the e-commerce website is dedicated to raising awareness for the disease, which he told the group is vastly underresearched.

A quick look at the Geek Supply website reveals everything from bamboo iPad cases to an omnidirectional wall clock for sale.

Products on the site are manufactured specifically for the company using quality raw materials, Olaghere said, and middlemen have been eliminated to bring products directly to the public and increase margins. All proceeds from the sale of the products, aside from the company’s monthly donation, are funneled directly into the business’s day-to-day operations, he noted.

“I’ve always been fascinated by social businesses that give back to the community,” Olaghere said.

The company is partnering with several sickle cell support organizations, selects a different one each month and plans to track exactly what is being done with the money for all its customers to see. If the e-commerce site supports specific research or funds a walkathon, for example, customers will know. Two charities are now listed on the site: The Martin Center Sickle Cell Initiative (Indianapolis) and the Sickle Cell Association of New Jersey.

An informative video about Olaghere and his sickle cell initiative can be found here. Also, the company is running a Kiva Zip campaign here to raise funds for marketing.

Refundo, covered previously here, has come a long way in its development. “We are a for-profit business with a social mission,” presenter Michael de Senna, business adviser to Refundo and managing partner at de Senna Partners, said.

Refundo was founded in June 2011 to help the underbanked improve their financial status and get connected to the U.S. banking system. Refundo’s founding team is Roger Chinchilla (CEO), Grimaldy Dominguez (cofounder), Jeremiah Nivar (CFO) and Bryan Amason (SVP of Sales).  The app encourages the underbanked to manage their money, learn how to use credit properly and improve the quality of their lives, De Senna added.

The underbanked are those who don’t usually have bank accounts. They may be denied an account because of bad credit or no credit history, or there may be a language barrier that prevents them from opening an account. They use payday loans, check cashing services and money transfer services, and are woefully overcharged for these. In New Jersey, de Senna said, check casher fees top out at about 2 percent, but in places like Louisiana it could cost someone as much as 10 percent to cash a check.

Moreover, the underbanked use cash a lot, which denies them access to some opportunities, such as reserving a hotel room.

The underbanked use mobile phones and smartphones, de Senna said, providing statistics to support his assertion. “A smartphone is the computer for the low-income person,” he noted, allowing them to access email, watch TV and stay connected in a way that is more affordable than buying a laptop.

The Refundo solution — which was first made available in May 2013 — was released as an iPhone app, with Android versions on the way, possibly introduced as early as September.

“We are able to allow almost anyone to open a bank account,” said de Senna. They need a Social Security number or an immigrant’s Individual Taxpayer Identification Number (ITIN) to do so.

Yes, many who live in the U.S. illegally pay taxes, de Senna said. “If you are an immigrant, you want to pay taxes because it eases your path to citizenship.”

The app is available in both English and Spanish, which differentiates the company from possible competitors, and Refundo will be translating the app to other languages in the future, de Senna added. He noted that big banks don’t want to get into the underbanked market. “They require a certain amount of profit from each customer in order to make their operation run.” Refundo isn’t regulated like the big banks because it uses banking partners to hold the money, he noted.

With regard to monetizing the startup, de Senna said Refundo makes money by charging $5 if a user doesn’t deposit at least $500 in a given month. The company is affiliated with a network of 20,000 ATMs nationwide that its users can access for free, but if they withdraw money from an out-of-network ATM, Refundo charges them $1. The company also makes a small amount of money from a little piece of the interchange fee charged when people use a debit card the company issues them.

To deposit money, customers can use Western Union for $3.95, but Refundo hopes to have an alternative remote check-deposit feature available soon so users can just snap pictures of the front and back of checks and deposit them that way.

The company is going after customers through tax preparers, the “financial gurus for this community” to whom the underbanked turn annually, de Senna added. In fact, the idea for Refundo originated from a tax preparation business the founders had started. In a brief email, de Senna told us that Refundo had been very busy attending conferences where it could be in contact with tax preparers recently.